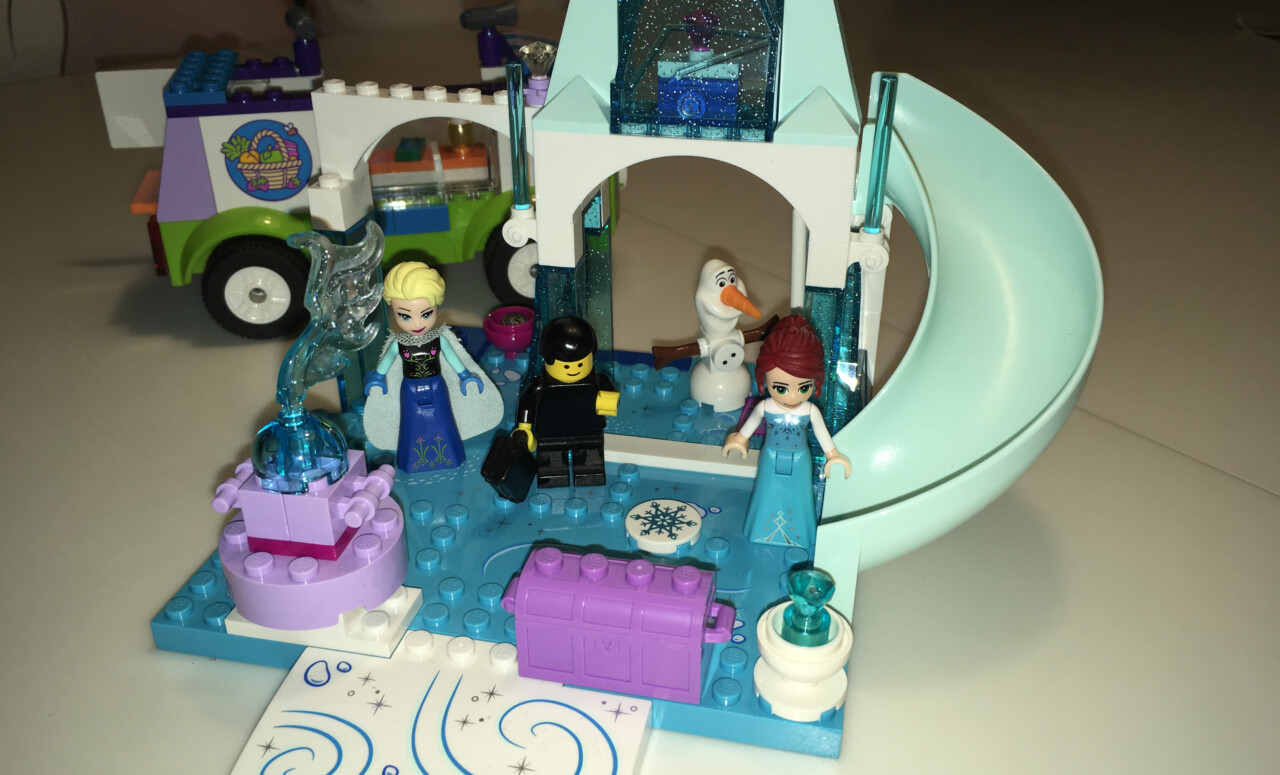 June has flown by, and it’s thus time to look back at another record-breaking month. – Not in terms of my finances though, but the heat is breaking all sorts of records, frying the Europeans to a crisp these days!

It’s been so hot (even in Denmark) that my faithful buddy, Russel the LEGO mascot, has moved out of his green garden, and into the Frozen castle! (I cannot take credit for this – it was my daughters idea…).

Something pretty significant did actually happen in the Total Balance household this month (besides the scorching heat), as I had to “rob” the bank to pay for the final part of the Property #1 deal…

I didn’t actually expect for the developer to ask for the rest of the money for Property #1 until the end of July (we take over the property on the 1st of August), but they decided to finalize the deal early (I guess), so I had to fork up €53.333! Since my bank account only held about €45.000 in total, I was more than €8.000 short to complete the deal…

Hence: I had to rob the bank 😛 Not literally of course – I asked them politely whether they would lend me the money. Luckily, my current occupation comes with certain perks (I work in the financial sector), so I got a line of credit, on which I can draw a maximum of €13.333. The credit was free to establish, and I can raise the maximum limit, if required. They charge an annual interest rate of 3.5% though (nothing is free in the bank) 😉 Remember that this is a credit without any form of collateral, so I think 3.5% is fairly OK. I expect to pay off the “loan” within the next 6-8 months, so the interest is not going to ruin me.

Anyway, we spent the first week of June on vacation in Malta, enjoying the sun and the beach (I enjoyed it in the shade, as always 😛 ), and I’ve been busy at work for the rest of June, so I haven’t had a whole lot of time to play with my investments. However, I did manage to enter a new platform this month! (oops, I did it again…).

I welcome Kuetzal to the roster, which is a platform similar to Crowdestor and Envestio. I must say that these type of platforms simply speak to me a lot more, than the P2P-type of platforms (Mintos, Viventor, Robocash, FastInvest etc.). I simply like to hand pick the (larger) projects that I find interesting to invest in (loan money to), rather than letting an auto-invest invest in 100’s of small loans, of which I know very little about…

For the purpose of diversification, I will keep the P2P in my portfolio for now though. 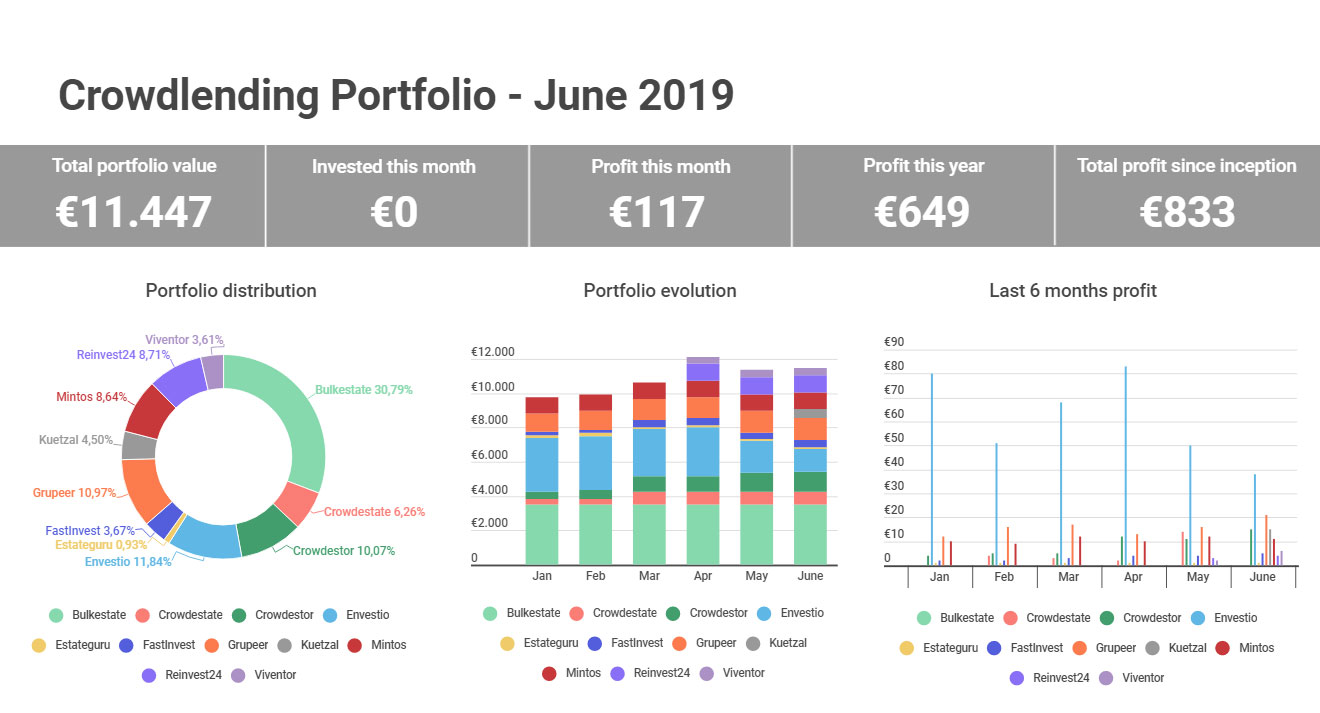 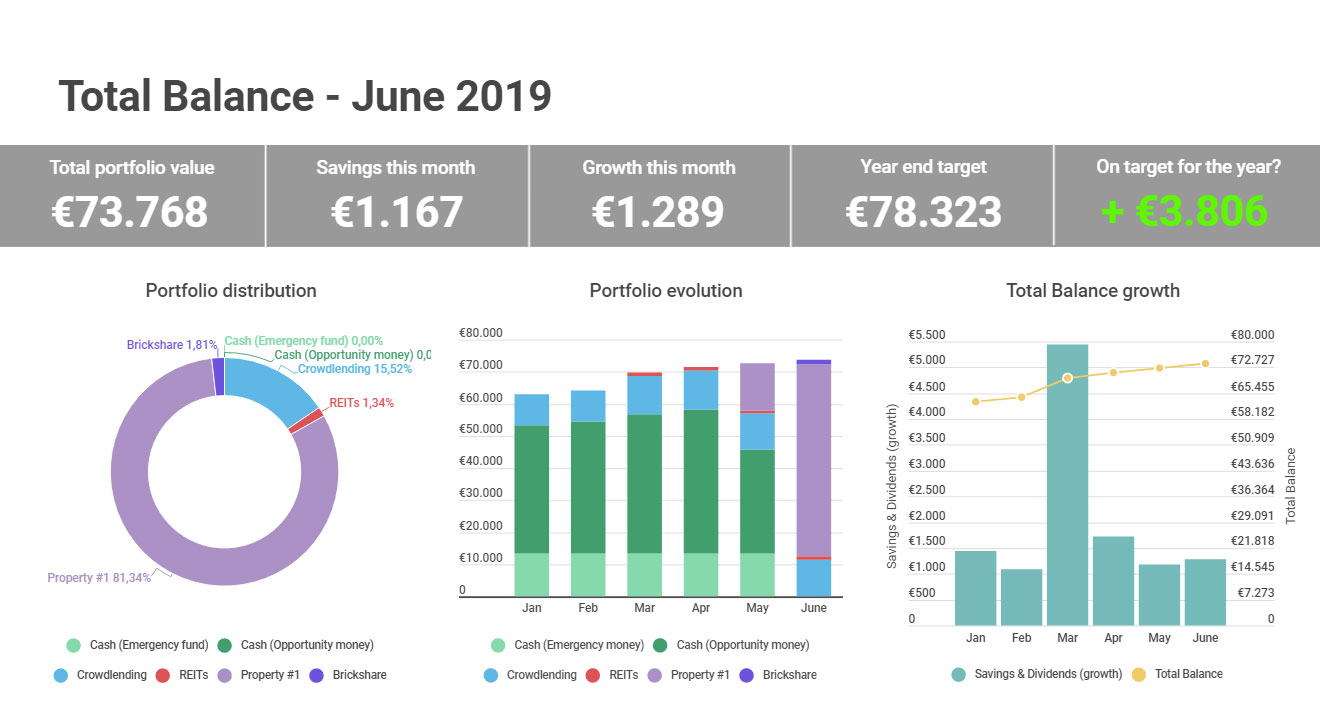 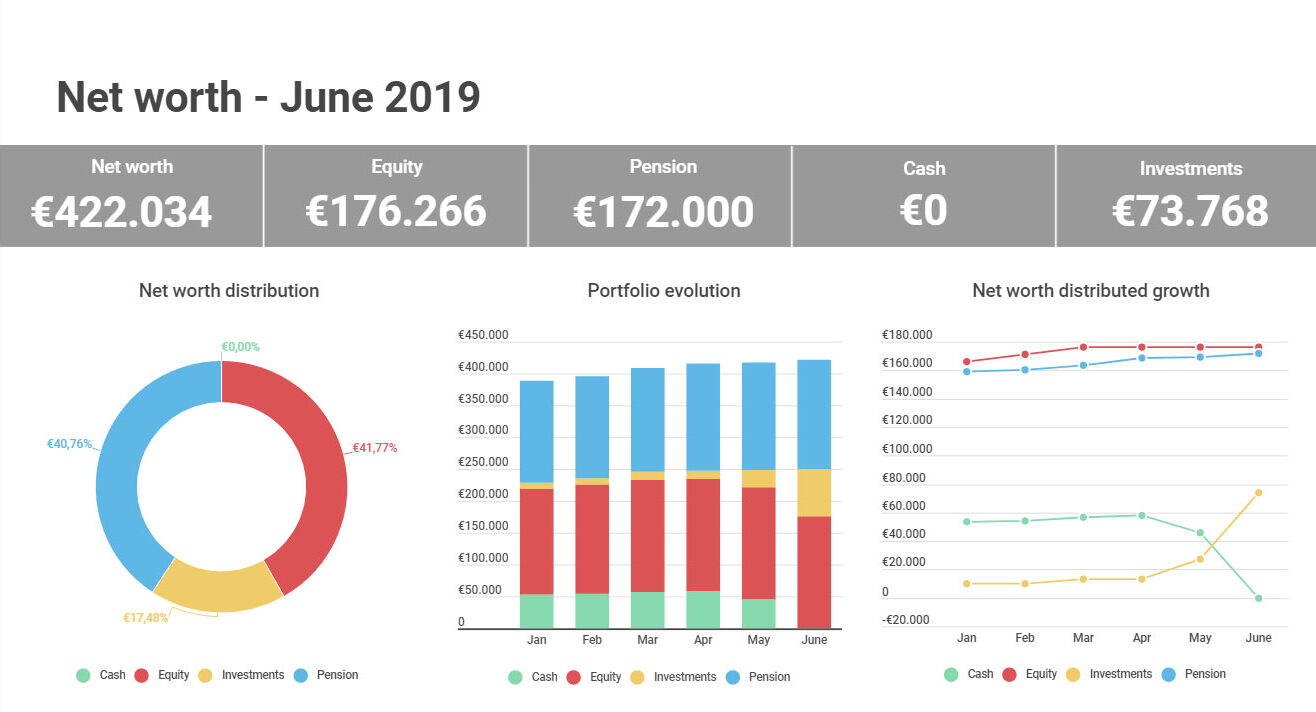 85% of my Total Balance is now invested in properties! I have to say, looking at that pie chart – it seems kind of crazy! What was I thinking? Well kids, there’s a meaning to the madness 😉 Eventually, something else besides properties is going to be creeping into the portfolio (I hope!)…

I have €0 left in cash reserves for the first time in a very long time. Luckily, I’ve had quite a few months to prepare myself for this situation, so I’m not stressed out about it. This simply encourage me to replenish that cash pile faster than I’ve ever done before! Wish me luck! 😛

A pretty standard income month, with a combined interest of €122 across crowdlending and REITs.

Not much to complain about there (or so I thought). The wife is beginning to become a little impatient, with the income from crowdlending. She believe that I’m being too “conservative”, and would like to see the income grow significantly from month to month. I’ve tried to explain my “strategy” to her, but she is not impressed (her words!).

So, we might just have to hand HER a chunk of money to invest for herself at one point 😉 – But as long as I have a leverage loan on Property #1, there is no free cash to invest. So until then, we’re following the plan of Mr. Conservative, Missy!

The classic grow chart is my favorite graph of them all. It clearly shows my progress, and I’m now up more than €20.000 since my journey began! 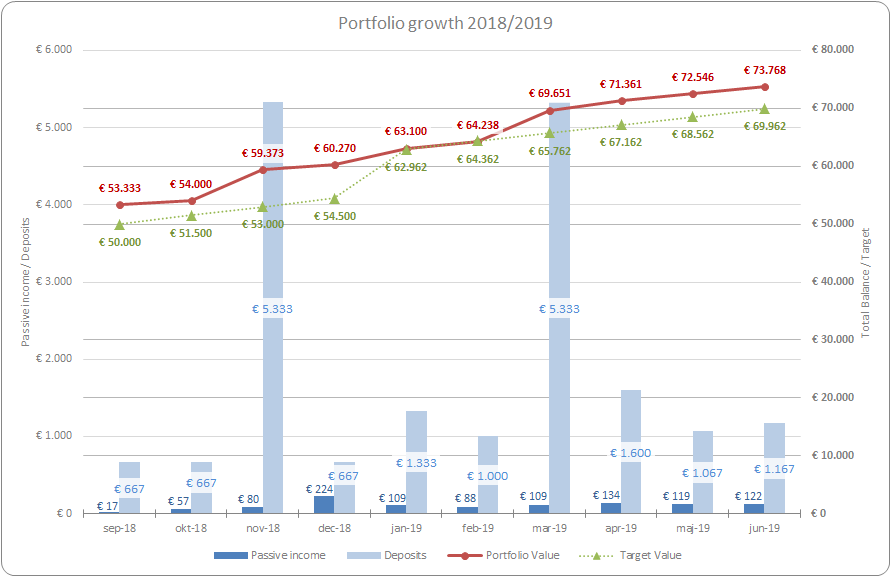 What else happened this month?

I had a post featured on firehub.eu this month (the one where I talk about diversifying your crowdlending portfolio), which I was pretty stoked about, so thank you for that (Sonia) 🙂 This resulted in a little extra traffic, albeit it didn’t quite match the record visitors of last month. July is off to a rocket start though (thanks to ANOTHER feature on firehub.eu 😉 ).

I’ve been busy at work, so I’ve been very inactive in the community, which means that I haven’t really had time to create a shout-out list this month 🙁 (sorry guys – keep up the good work!)

Anyway, enough about me! How was your month?!