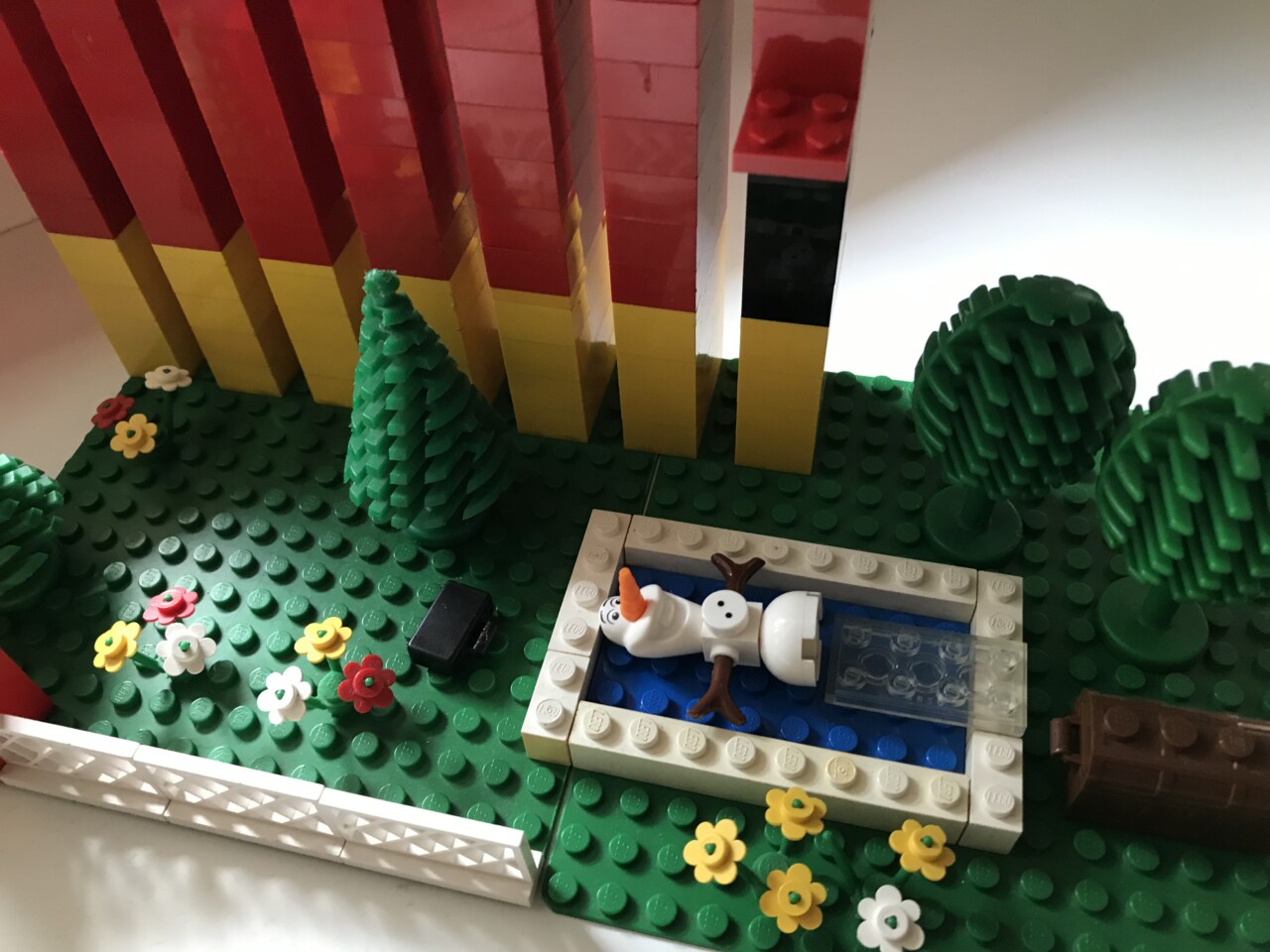 Another month has blown by, and it’s thus time for another riveting update from yours truly.

My trusty mascot, Russel the LEGO guy has unfortunately gone AWOL. My daughter claims she doesn’t know anything about it, but it’s quite obvious who’s to blame for his vanishing (unless CatZilla ate him…)!
Anyway, I’ve brought on his substitute, Olaf instead! (Who’s naturally taking the opportunity to do a bit of sunbathing!)

To no fault of Olafs, it’s been a pretty poor month, both in terms of savings and crowdlending income. Since I’ve been diversifying out of Envestio (my best earner to date), the days of €100 interest months seem to have vanished along with Russel. – But, as always – I’ve got a few tricks up my sleeve 😉 Let’s see how this month turned out!

So, what went down in the Total Balance household this month?

Summer vacation! In the true spirit of FIRE, we went camping (hold on). Well, we stayed at a campsite, but in a cabin. Some might call it Glamping (I wouldn’t, it was not a fancy cabin, albeit it did have running water and a toilet). It was a nice small and cozy campsite out on the countryside, so that was great. We also stayed 1 night in ExpensiveLAND! – Sorry; LEGOLAND! THAT was also fun, but insanely expensive. Holy sh** we’re not doing that again. Been there, done that (yes, the kid got the T-shirt!) 😛

Anyway, I’ve not been tending a lot to my investments (passive income, right!?) this month, so I was a little bit surprised to see that I now have between 10-25% LATE loans on several platforms. Crowdestate is probably the worst, as the loans here doesn’t have buyback, so I’m preparing myself for the inevetiable where I have to write off €200 worth of loans…Let’s hope it doesn’t come to that, but I’m not feeling very confident about those loans. It’s however good that this happens now, because while we KNOW this is a risk with crowdlending, we tend to forget about it, when every loan is paid on time. My diversification strategy is tailored to cope with the inevitable of a loan defaulting, so I’m still confident that everything will be OK – but seeing those first bumps is always a bit nerve wrecking…

Anyway, let’s look at the numbers! 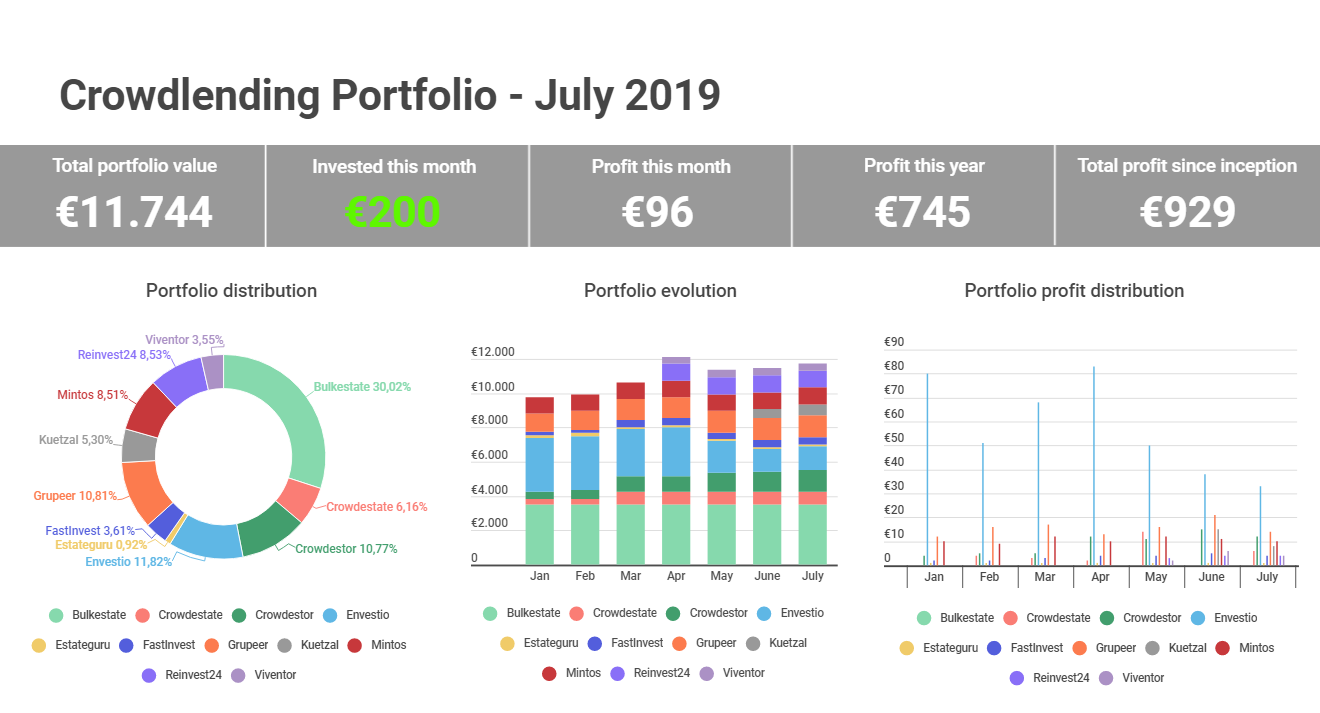 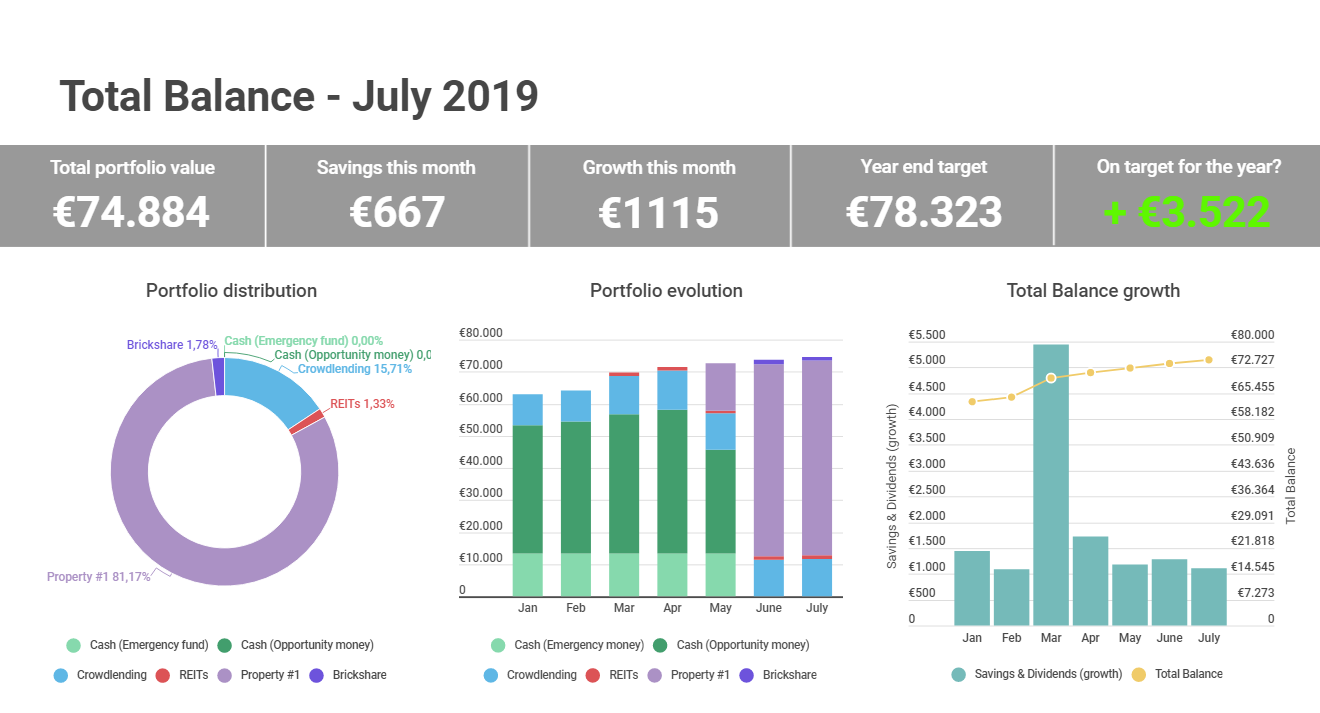 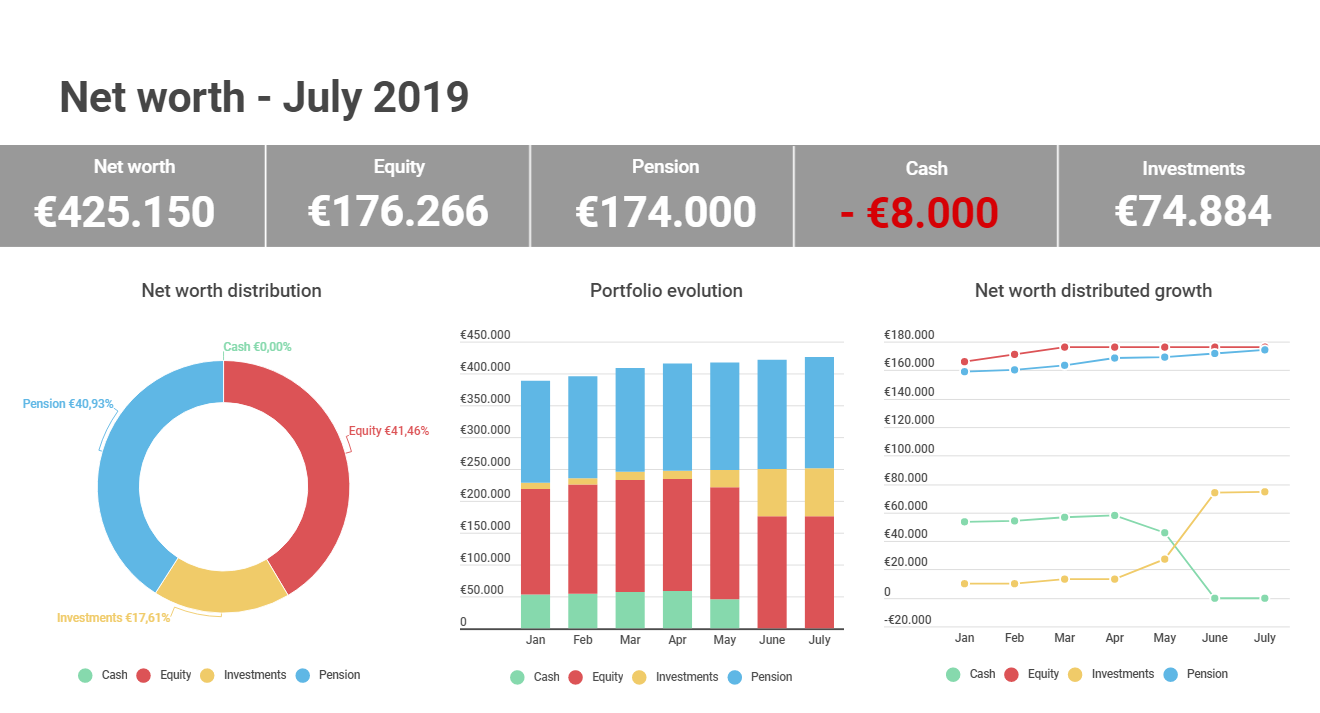 I managed to add a little cash to the crowdlending pot this month, as I saw a few interesting projects that I simply had to participate in (at Crowdestor and Kuetzal). I think it’s pretty amazing the amount of projects that Crowdestor still manages to spit out (are you reading this, Envestio?), but I’ve now decided that I’ve reached my (current) deposit max at Crowdestor, so it will be a while before I can make another investment here.

Income on most platforms are leveling out a bit, so this has been a slow month. Let’s hope it picks up again in August 😉

Luckily, my recent bank change (I switched bank to get a cheap line of credit that I used to leverage the purchase of Property #1) saw some interests from my past cash stash arriving in my new bank account. I actually received interests in the amount of €294 from my old bank, which I’m quite pleased about (seeing that it was otherwise a very slow month). Of course I had to fork up HALF of it to my wife, to ease her “pain & suffering” from enduring YET another bank change…
She’s now back in her old bank (we have two different banks now), and I dare not change that EVER again 😉 (next time she might take more than half! 😛 )

I still have about €110 in interests awaiting to be paid out (in Norwegian Bank), but unfortunately they won’t be paid out until New Years, so I have that to look forward to, as I don’t have any money in the account anymore (since I emptied the bank). I predict that reaching my yearly target of ~€79.000 is going to be tough, so those €110 might turn out to be paramount in reaching my target! 😛 (we shall see).

Still dragging a little bit of leverage debt with me, and it’s probably going to take me about 8-10 months to wipe it out completely, but it’s fairly “cheap” so I’m not stressing too much about it. All in all I managed to scrape together a total passive income of €247 this month, which is a new record for those keeping score (who doesn’t!?). Not too shabby for a slow month 😉

And as always, the classic growth chart (I like looking at this 😛 ) 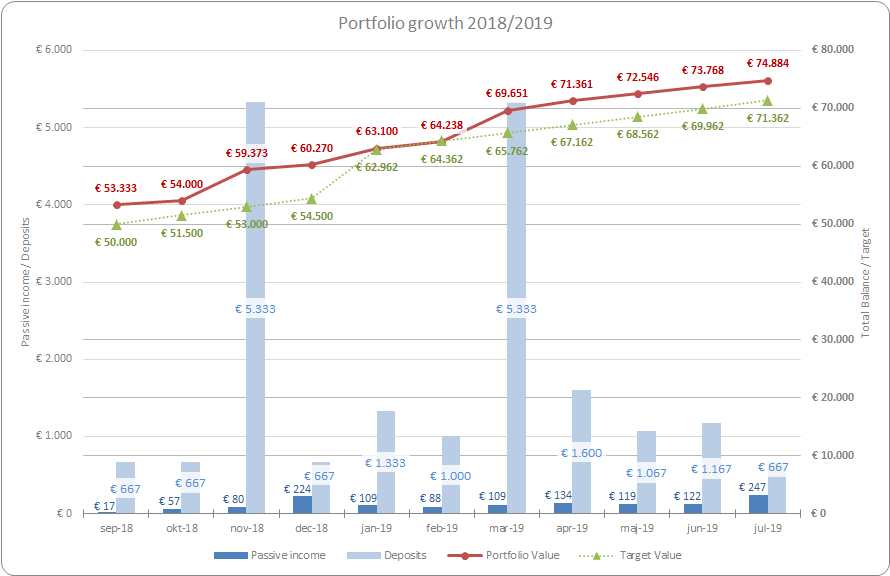 Still keeping on track for my yearly goal, but next month is going to be expensive, as the credit card bill from the trip to ExpensiveLAND is due (among other things), so I don’t think I will be able to add a single penny to my Total Balance next month…

In other news, the entrance of August made me the official proud owner of Property #1 (August 1st 2019 thus marks the day where I received my official Property Investor badge – it feels good!). Unfortunately, this building doesn’t have any real cash flow until the year 2023 🙁 (the first 4 years of cash flow will be used to bring down the LTV). Talk about an anticlimax there!…I hope future me will approve of past mes decisions, once he sees that first cash flow check in September/October 2023…

Anyway, that’s it from me! See you next time!