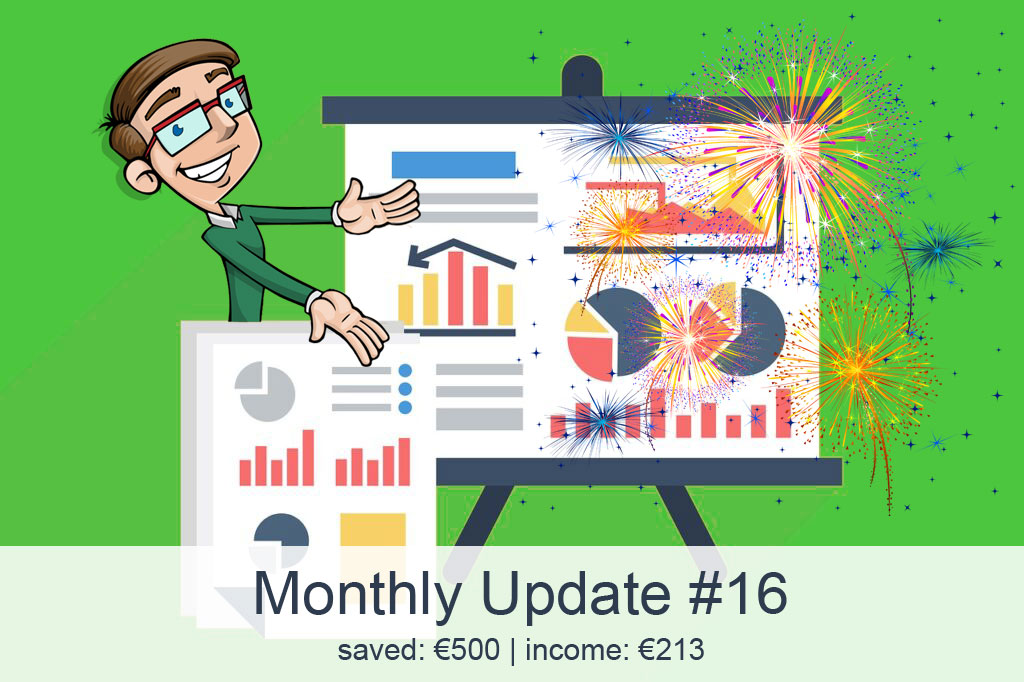 Time flies, when you’re counting pennies! It’s 2019 no more, and this is thus the final Monthly Update of 2019!

The month of December saw no records broken (besides maybe the one for how much sugar one guy can eat within 1 month – yikes!)

Christmas was indeed long and expensive, in many ways. Anyway, January is here and it’s thus time to get back in the saddle! (Literally and figuratively speaking!).

Let’s look at some numbers from the final month of the decade – did I reach my goal or what!?

Ok, I don’t think I can drag this out any longer – the suspense is killing me! (Patience is not my strong suit, if you recall!)

YES, I reached my Total Balance goal for the year! WOHOOO!

Aided by €104 from crowdlending, €109 from bank interests and a €500 deposit to my savings I managed to crawl across the finish line, beating my yearly target by about €200. I outlined my goals in January last year, where I set out to reach a Total Balance of €78.323 by the end of 2019.

So, how did that happen, you ask?! Well, the majority of the growth came from my savings deposit, but about 10% of it came from my crowdlending income. The main contributors of this growth came from a couple of platforms – primarily Envestio, Crowdestor and Bulkestate. Since I’m currently shuffling my portfolio a bit (I’m moving out of P2P), the coming months will not be setting any records, in terms of crowdlending income. But that’s OK, since crowdlending remains a “niche” product in my portfolio (I now have just over 10% of my Total Balance in Crowdlending).

As I hinted in my last post December was a bit of a roller coaster in the Total Balance household. I was joking about Christmas Miracles in my last Monthly Update, and just 5 days before Christmas, we did in fact receive one. My wife received a huge fat check from her insurance company, which she had been waiting for for more than 9 months.

So this took care of her little cash flow issue that I had mentioned a couple of times on the blog. Insurance is something that we all have/pay for, hoping that we never actually need, right? So we were beginning to doubt, whether this check would actually ever arrive. – But fortunately, it did! And thus, Christmas was saved! – Well, sort of.

On that same week it became apparent that Kuetzal might be a bit dodgy around the edges. Several bloggers have written about this, and it has now turned into a bit of a storm that I fear could ultimately take down Kuetzal, and maybe even other platforms in the wake (because people act irrational when they fear for their money). In reality, this is a risk that comes with the turf, guys. I’m sorry to have to be the one to tell you (again), but P2B crowdlending in particular IS risky business.

What is happening now, is people are attempting to withdraw their money (from active projects), using the buyback guarantee that the platform(s) give, to make the investors “trust” them with their money. In reality, this buyback means shit. – It’s like an insurance that doesn’t actually work, because it’s a classic case of a “bank run”, where people run to the “bank” to get back their gold – only, the bank doesn’t ACTUALLY have that much gold in their vault. Thus, they have to default. This is exactly why you should never put money in a platform that you are not prepared to lose. It WILL happen eventually (maybe it has already happened?), so you have to calculate that risk into your spreadsheet, when you do the math at the end of the day 😉

I have just shy of €900 invested with Kuetzal. Maybe they are gone, maybe they aren’t. But I’m NOT withdrawing money from ACTIVE projects, as this would mean the certain death of the platform. So I urge you guys (if you have money with Kuetzal) to play it cool and see what happens. We simply don’t have all the facts yet. Yes, it’s likely that they are dodgy/have dodgy projects on the platform – but this should NOT come as a surprise to you. 20%+ interests are not normal. Assume HIGH risk when you join these type of projects. The same goes for Envestio and all the others…

Personally, I’m very eager to see what happens. €900 is an expensive theater ticket, but I have first row seats 😀

Anyway, my game-plan for the crowdlending area is still to have about €1000 invested in 10 different platforms. Given this recent development with Kuetzal, I don’t think I want to put more eggs in this basket for now 😉

Ideally I would like to bring in at least €150/month from this source, but it will of course require that I’m fully invested (on high yield platforms) all the time – which is going to be difficult.

That became a little dark there for a minute – but no risk, no reward!

Anyway, here’s the last infograph of the decade! 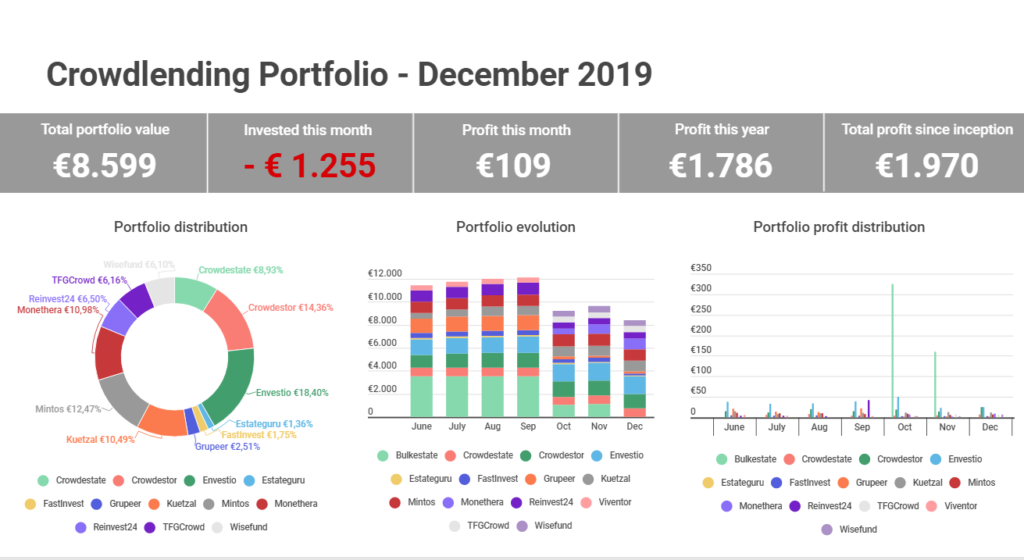 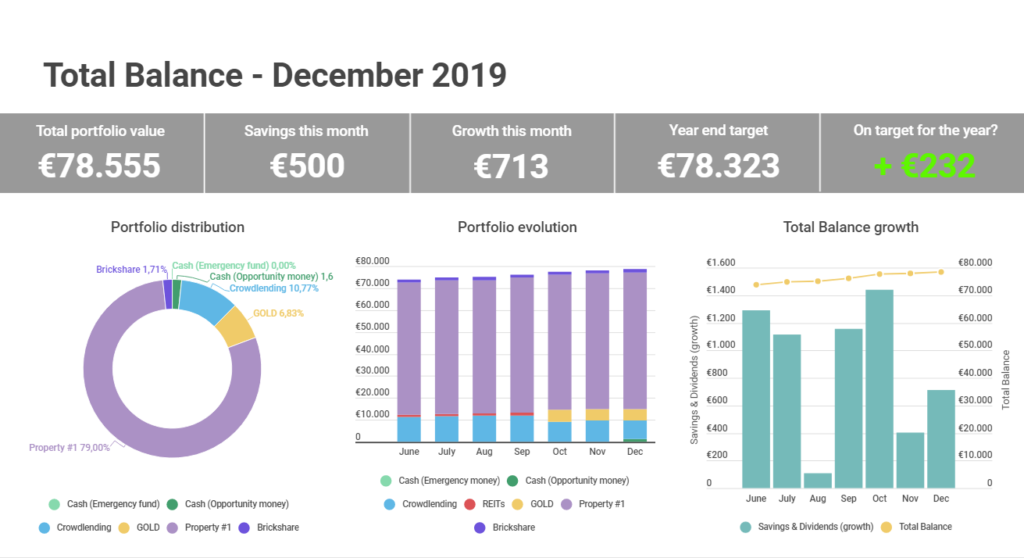 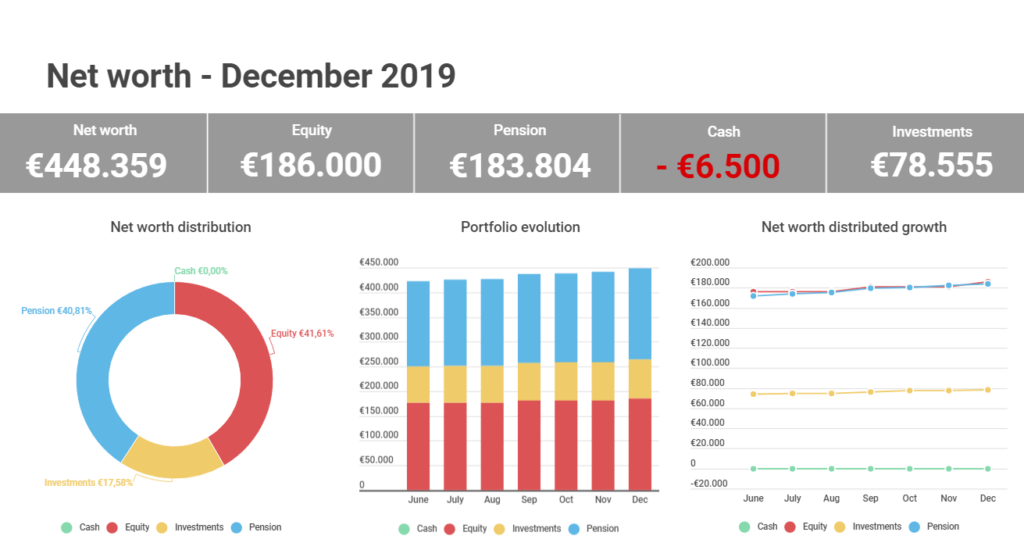 Again, I like to focus my eye on the big picture (which you’ll find on Page-3). My Net worth has increased by more than €50.000 in 2019! The growth is driven fairly even between my Pension, my Total Balance and my equity – we could call these “The 3 Pillars of my wealth” (which I shall write about in another afsnit). Of course the most interesting/currently relevant in terms of FIRE, is my Total Balance, as the other two are very illiquid, and my pension is locked until I turn 60. My equity can of course be liquidated (by selling our house), but where/how should we then live?…

I have big plans for 2020, in regards to that before mentioned equity. Something that I shall reveal in a coming post! (Enough with the spoilers already!?).

As we can see from the income statement, I’ve had some deposits/withdrawals from different platforms. I will withdraw uninvested cash at Crowdestor and Envestio, until I reach about €1000 invested (this is my current max per platform). I’m now almost at €1000 at Monethera as well. TFGCrowd and Wisefund had a few new projects in December, which I participated in. The €50 that I withdrew from Kuetzal is still in transit (since Dec 19th – to test if they were still servicing withdrawals. I guess the judgement is still out on that one!). We shall see, if it ever makes it to my account 😉

1 guy/girl signed up to Monethera, using my referral link! Thank you for that!

This resulted in an instant bonus of €5, which I have happily forwarded directly to a danish organization called Børns Vilkår, which is an organization that helps govern the general welfare of vulnerable children in Denmark (“no child should be left behind”). Well, the smallest donation possible via their website was €10, so I technically donated 200% of my affiliate income to charity for the month of December 2019! 😛

Thanks for the support, stranger! Whoever you are 🙂

This is probably one of my favorite subjects to cover on this blog! The classic growth chart (soon to be updated in 2020!) shows my progress since the beginning of this journey. It’s pretty, ain’t it?! 😛

The classic growth chart is starting to become a bit messy to look at, so it’s going to get an overhaul in 2020! 😉

I still really like to look at it though. In 10 years time, it will probably be my favorite memory of this coming decade 😛

That concludes the month of December 2019. Exciting times, indeed! I’m currently working on “My goals for 2020” post, which I will publish soon, so if you like what you see, I suggest you stick around! 😉

All in all, as the Classic Growth Chart clearly depicts, 2019 was a bit of a bumpy ride (always UP, though!), but in the end I made it across the finish line. Due to the nature of my investment strategy, it will become harder and harder to hit my yearly targets (until 2023, when Property #1 hopefully delivers its first payout), so I’m preparing myself to “fall behind” for the next couple of years. – However, as always(!), I do have a few aces up my sleeves, so you never know what’s gonna happen 😛

My plan to reach (lean)FI is currently a 13-year plan, but I’d really like to cut it short, if possible…It’s going to take a few more Christmas Miracles, and more than €150/month in crowdlending income in order to do that, obviously. But if anything, 2020 is the year of Hope – so I will keep my hopes up that 2020 will be a fantastic year for the Total Balance household (Spoiler alert: It has gotten off to a good start already!).

See you next month, dear readers! 😀