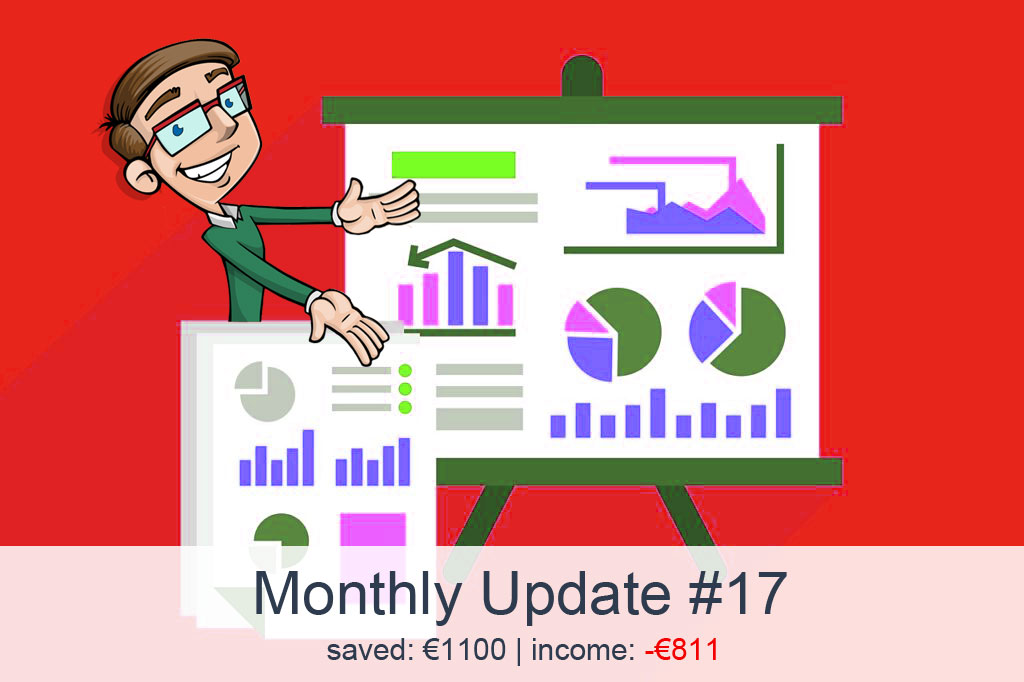 The first month of 2020 is already over, guys – and thank God for that.

January is usually my least favorite month of the year (long and cold), and this year was no exception. There’s really no easy way to say it! What a shitty month. Lets wrap this one up quickly, so we can get back to February and hopefully enjoy the arrival of an early spring this year (thank you, global warming).

As we all know December spelled trouble in Crowdlending land, with the fall of Kuetzal. Next in line was then Envestio. Two of my best performing platforms turned out to be dubious (as it seems). That kinda put a damper on everyone’s excitement for the new year. The fall of these two platforms basically saw all my crowdlending earnings from last year vanish over night. I guess there’s always a silver lining though; At least I don’t have to worry about paying the taxes on my crowdlending income for 2019 (HAHA – the joke is on you, IRS!)…

Normally I would be pretty devastated about losing €2000+ within 1 month (I technically only lost about €1900, which was what I had invested in Kuetzal and Envestio), but for some reason I have been completely unfazed. Somehow I must have managed to prepare myself for this inevitable scenario. Easy come, easy go. It’s the name of this game (apparently!).

By sticking to my original crowdlending strategy I managed to “only” lose what I was willing to lose. Even though my wife was pushing me to put in more (to earn more – she’s an impatient woman), I stood my ground. I had over €3000 invested with Envesito to begin with, until I started diversifying, so I’m glad that I at least managed to cushion some of the fall.

So, for the month of January I’m going to write off 100% of my investments with Kuetzal. I’m not completely ready to write off Envestio just yet, as there is a slight chance that some of our money can be recovered (providing that at least some of the projects were real). If you had investments with either Kuetzal or Envestio, file a claim to the Estonian police (who are investigating both cases as a crime). Let’s see what happens here – I’m prepared to write off everything, but I think we kind of have to see this case to the end first 🙂

I feel the need to point out that while my crowdlending adventure takes up most of the space here, it now accounts for less than 10% of my Total Balance, so it really is a “niche” product. – But it sure is fun to watch! 😛

Almost ALL of my remaining platforms (except TFGCrowd) have now all issued statements about the current situation in the industry. Because of these two fraudulent platforms, everyone else is eager to prove their non-fraudulent operations (allegedly). GOOD! I still have a couple of “high risk/red alert” platforms in my portfolio, and I’d really hate to see another one tumble! I will remain patient for now, but I don’t think I will be adding anymore funds to the platforms for a while. I’d still like to get to 10 platforms with €1.000 invested in each platform, but right now I will let the dust settle before I make anymore contributions to that pot.

This of course also means that my passive income is going to be somewhat sluggish for the foreseeable future. Perhaps it’s time to look at those stock indices after all? 😉 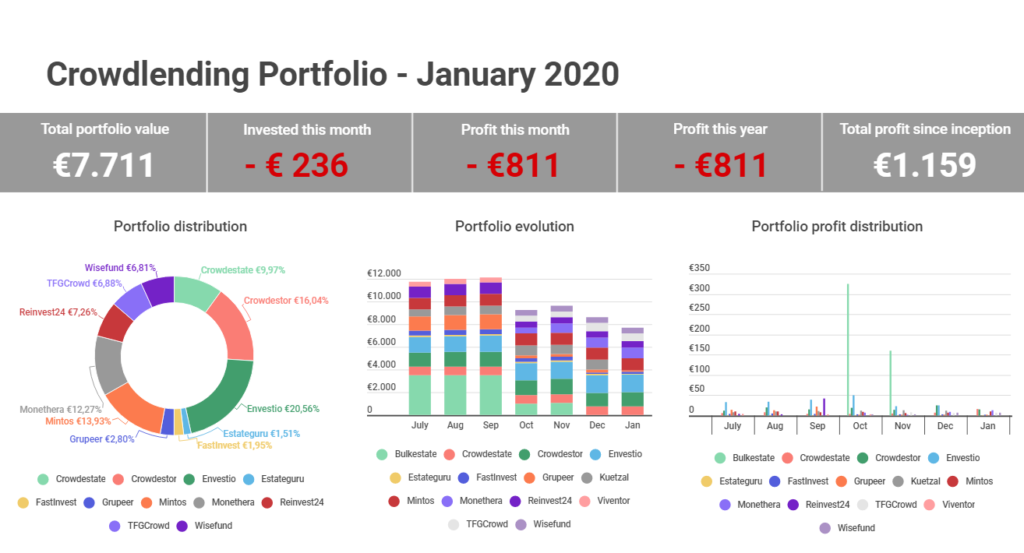 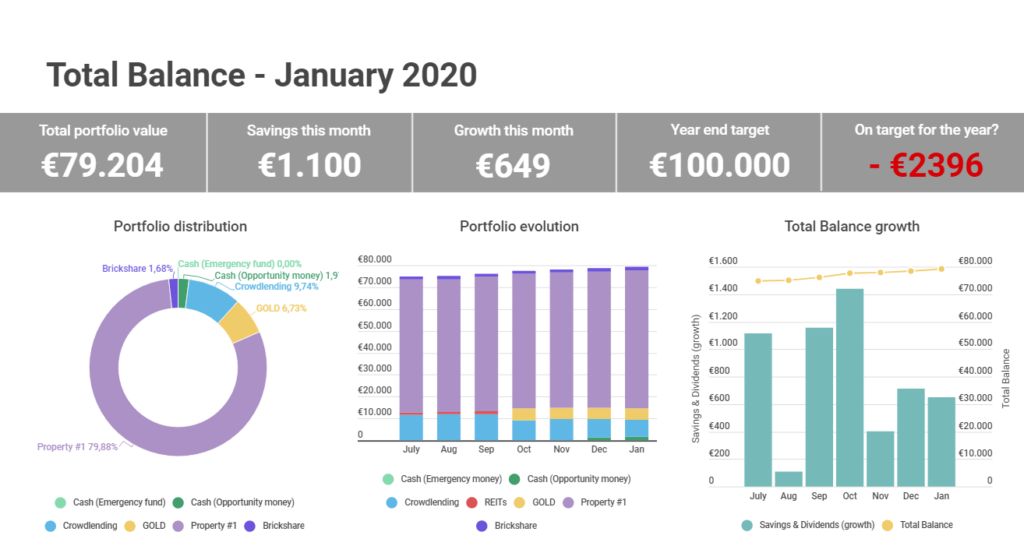 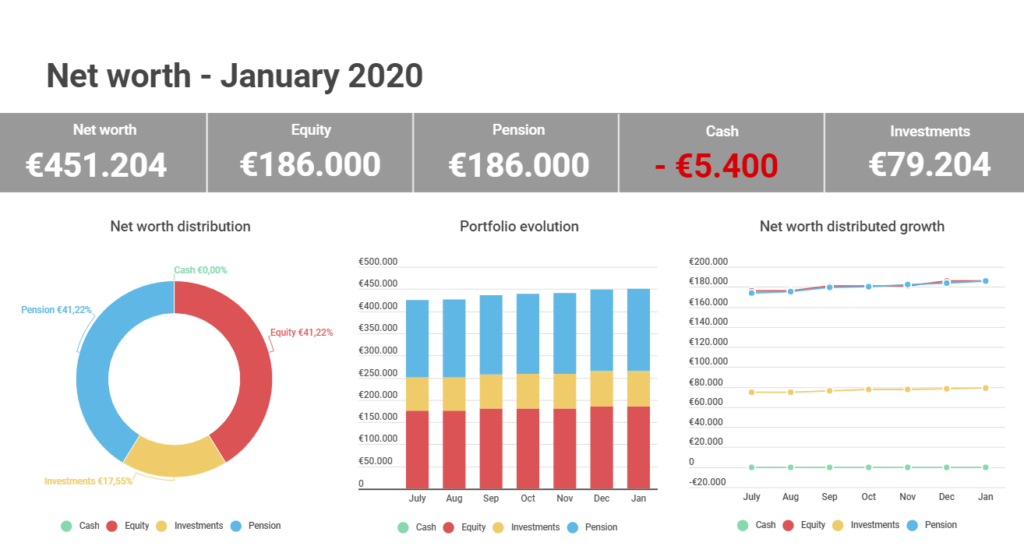 Not much fun to look at here this month. – Except maybe on Page-3 (Net Worth). It is uncanny that my pension now match my equity down to the last penny! My next mortgage payment isn’t until the end of March, so I expect my Pension to rise slightly above my equity in the coming months (unless something crazy like – oh, I don’t know – a crazy “killer virus” wreaks havoc on the financial markets the next couple of months – which is not unlikely! This is actually another great example of Mass Media induced hysteria. Don’t get me wrong, the Corona Virus is terrible. But the REGULAR flu killed 80.000 people in 2017-2018. Enough said!).

I somehow managed to forget to register a €200 deposit that I made to TFGCrowd last month, so they have now “magically” appeared on this months balance sheet, which makes the growth looks less horrendous than it otherwise would have looked this month.

Fingers crossed that Crowdestor, Monethera ,TFGCrowd and Wisefund now manages to stay in business for the foreseeable future 😛 (as they are now the main breadwinners of my portfolio – besides Mintos, which I don’t fear will go out of business anytime soon!)

I now have 3 late loans on Crowdestate, so I’m crossing my fingers here. But considering how things have been going lately, I wouldn’t be surprised if they end up defaulting. Luckily they are real estate backed loans, so there are some collateral here. We shall see how it goes!

There’s not a whole lot to say about the income statement this month. It’s looking pretty boring (ha!). I was hoping to breach €80.000 this month, but with the whole Kuetzal ordeal that didn’t quite pan out. Next month I’ll have to (probably) write-off Envestio, so it’ll look even worse by then…

Oh well, it’s time to look on the bright side; at least spring is just around the corner! 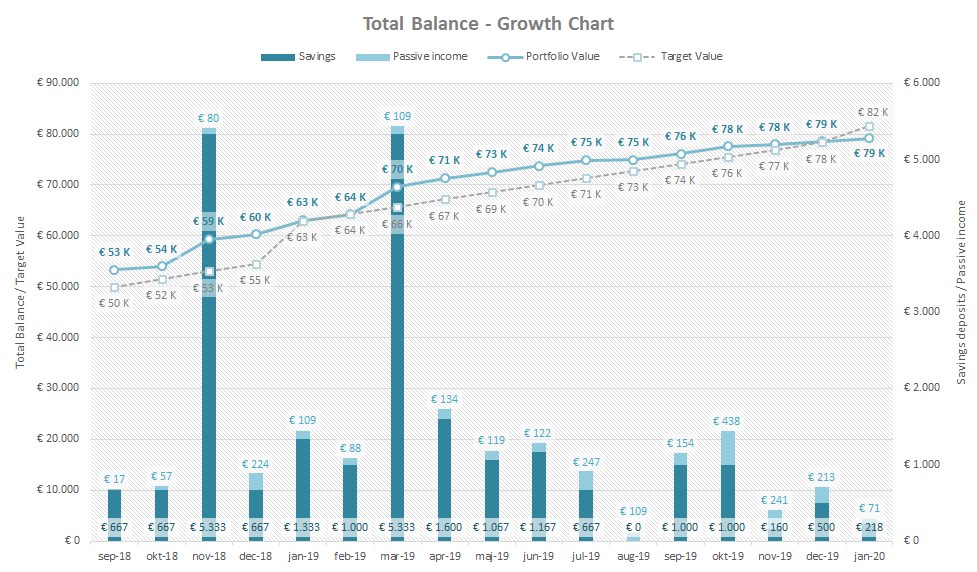 2020 boasts a new look for the Classic Growth Chart. It’s getting increasingly difficult to display the progress month by month in a clearly visible manner, so eventually I’m gonna have to switch to a quarterly view (and eventually, yearly of course). But for now I think I can manage to squeeze in another month or two in the chart. It’s so damn satisfying to look at my progress. Of course now my target is getting away from me, which is really annoying 🙁 (I will catch up in a few years time though! 😛 ).

A month to hopefully quickly fade into oblivion. Let’s just forget about it and move on, shall we? 😛