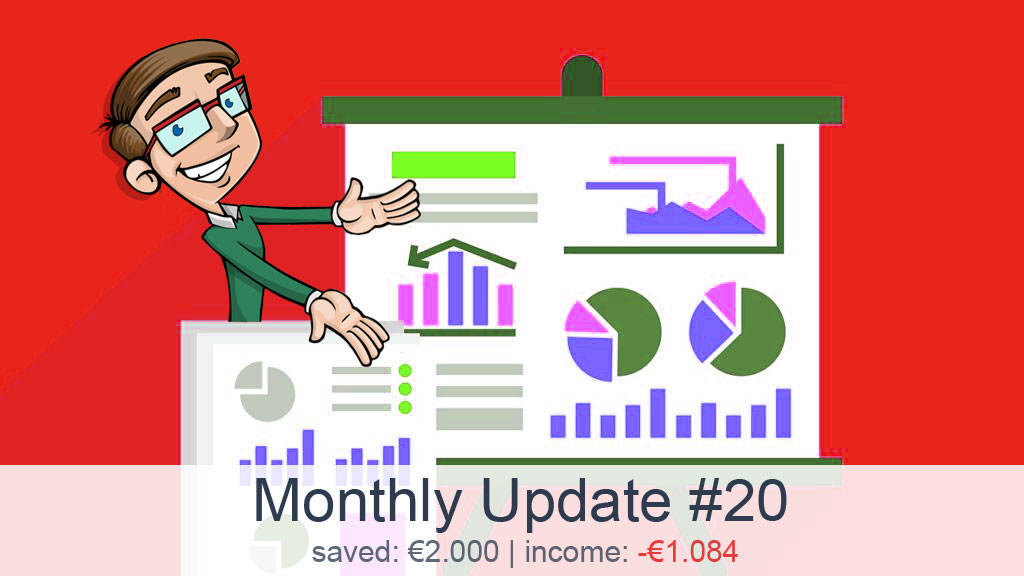 This is getting kinda old!

It now seems like ages ago, when everything was peachy, and my passive income amounted to hundreds of euros each month. Remember back when you were allowed to visit a restaurant and maybe catch a movie or a show afterwards?! Those days are long gone – hopefully to return again eventually though.

Let’s cling to that hope for a little while longer, cause without hope what do we have? (No Cash, no Jobs, no Hope!? Please don’t die, Kevin Bacon!) 😉

April is finished, and it’s thus time for another riveting update from yours truly.

I’ve had my first week back at the office. We now have to work 1 week at the office and 1 week from home. I didn’t mind going back to the office, and kinda enjoyed talking to my co-workers, and eating lunch in a cafeteria again (they make to-go bags), yay!

When I work from home, I’ve managed to get into a good habit of working out before noon. That’s when I feel most energized, so it works perfect for me. We have a small home-gym that now (also!) includes a water rowing machine! (yay – I bought it 2nd hand, but unused still in the box!). That’s a pretty cool cardio machine! It’s tough, but effective 😉

In Crowdlending land, things have taken another turn for the worse (really, can it get much worse?!). It’s now pretty clear that both Grupeer and Monethera are scams, and both crews are now AWOL. At this point, it really comes as no surprise, so I’ve just decided to write them off and get on with my life. What worries me now though, is that I have 3 platforms left, which have the potential to (eventually) fall in that same category. This includes Crowdestor, TFGCrowd and Wisefund.

However, of those 3 Crowdestor and Wisefund seem to have taken the right steps, in terms of protecting both their business, the investors and their borrowers, in that they are trying to arrange individual deals with each borrower, to get them through the Corona crisis. I worry though, how they are able to continue to operate, if they are not getting money in from their borrowers. I’m not entirely sure how their business model work, but I assume that the business is dependent on their borrowers paying their dues on a regular basis. If enough of them don’t, they can’t pay their employees, and they go out of business.

TFGCrowd however, seem to continue to operate like nothing ever happened, which makes me even more suspicious. They continue to launch (high-yield) projects, and as long as they get funded (they do, albeit a lot slower than before the crisis) they can potentially continue to operate – but knowing what we know now about these platforms, I’m quite certain that they do not have purely clean flour in their bag (as we say in danish). They service withdrawals (still) flawlessly though, and I’ve been able to make withdrawals from TFGCrowd within the same day several times. I will give them the benefit of the doubt for now, but I’m mentally preparing for this one to be the next platform to go bye-bye.

Crowdestate is a solid platform, I have no doubt of that – but their projects are starting to fail, and this will undoubtedly put their business under serious pressure. They’ve taken steps to bring in some extra cash already, in that they have announced a 2% fee (like Mintos) to sell investments on their secondary market. I took the opportunity to list my investments on the secondary market, at a 2% discount BEFORE the fee is applied (it will come into effect on the 4th of May). Two loans have sold already, 2 is still on the market and 2 is in default. I’m now preparing to write-off those defaulted loans as well, but we shall see if Crowdestate can manage to recover some of the money.

FastInvest has launched several campaigns to bring in more investors. They have now launched a kind of secondary market, where you can sell your loans without having to forgo the accrued interest. I’ve sold all my loans, and have now exited the platform. As of now, I have no reason to suspect them of foul play, but rumors in the community seem to suggest otherwise. Invest with FastInvest at your own risk 😉

Mintos continue to operate as usual. I suspect we will see more and more lender defaults, and in those situations the buyback guarantee won’t help you. I’m undecided whether to leave Mintos too, but for now I’m still fully invested, and haven’t made any changes to my autoinvest…

Oh well, the show must go on! We live and we learn 😉 So, what have I learned?

I’ve learned that until the money actually reaches your bank account, it does not exist – this goes for ALL type of investments, but crowdlending in particular, obviously. I’m somewhat disillusioned by this whole thing. I used to love looking at my Total Balance growth chart, seeing those little light-green parts at the top of each bar grow steadily (the passive income) every month. But up until now, none of it has been real (my passive income is now negative, as it stands). I should just start all over with that chart…

When one door closes…

Logically, I know which approach is the right one for me. I’ve (so far) made my one massive real estate investment that I set out to, when I first started this blog. I’m very proud of that accomplishment, which for now has proven to be fairly pandemic-resilient. But the thing about real estate, is that it is extremely slow, extremely iliquid – and kinda boring too. So I entered crowdlending to get some ACTION from month to month, while saving for that next big real estate investment. And Action I got! – But for now it has mainly served as a distraction, really.

There’s something deeply satisfying about seeing that passive income trickle in, every month. Little by little, you build up your expectations and your hopes to see more and more of it, and eventually reach your goal (with help from compound interest). Just to have that illusion ripped away from under you. The same has been the case for the people with large stock holdings these past few months. Unlike the (dubious) crowdlending platforms though, the stocks will recover eventually (a few will not…). But seeing that major “loss” on paper from one month to another really hurts. But that is when we have to remind ourselves that the money we see isn’t real – until we cash out.

This is why I have to accept the fact (and remind myself) that the road to FIRE better be damn boring (investment wise, of course). The ACTION doesn’t provide me any value.

So, I used the opportunity (cause I had some opportunity money) of the stock drop to re-acquire a (Canadian) REIT that I owned a while back. It was down about 60% from its ATH, and I got it at about 50% discount. It pays a nice monthly dividend – which actually hits my bank account – and it seems to be doing fairly well (in terms of rent collection), despite the current situation. Shortly after I bought it, it surged 25%. I then started calculating, how many months of dividend it would take me to earn the equivalent of the value that It had gained, if I sold it at that price…

I ultimately decided to keep it, but I’ve decided to sell it if it ever reaches a 100% gain (which would put it back to where it was before the crisis). Shortly after I bought it, they announced that they were cutting 40% of the dividend payout. A bit annoying, but I believe it to be the right decision for the overall value of the REIT. This will help them keep their liquidity, until this whole crisis (hopefully) blows over. It will now provide me with a passive income of around €15 (post tax) every month. Not bad, but nothing that will make me rich. It’ll be something to put on the growth chart though 😉

Perhaps this will lead to a portion of my Total Balance being allocated towards dividend stocks? Not completely decided yet, but it’s a possibility 🙂 It’s pretty clear to me now though that the part of my portfolio allocated towards crowdlending needs to be (eventually) re-allocated towards something else. I’m not feeling like putting anymore of my hard earned cash in that pot anyhow 😉 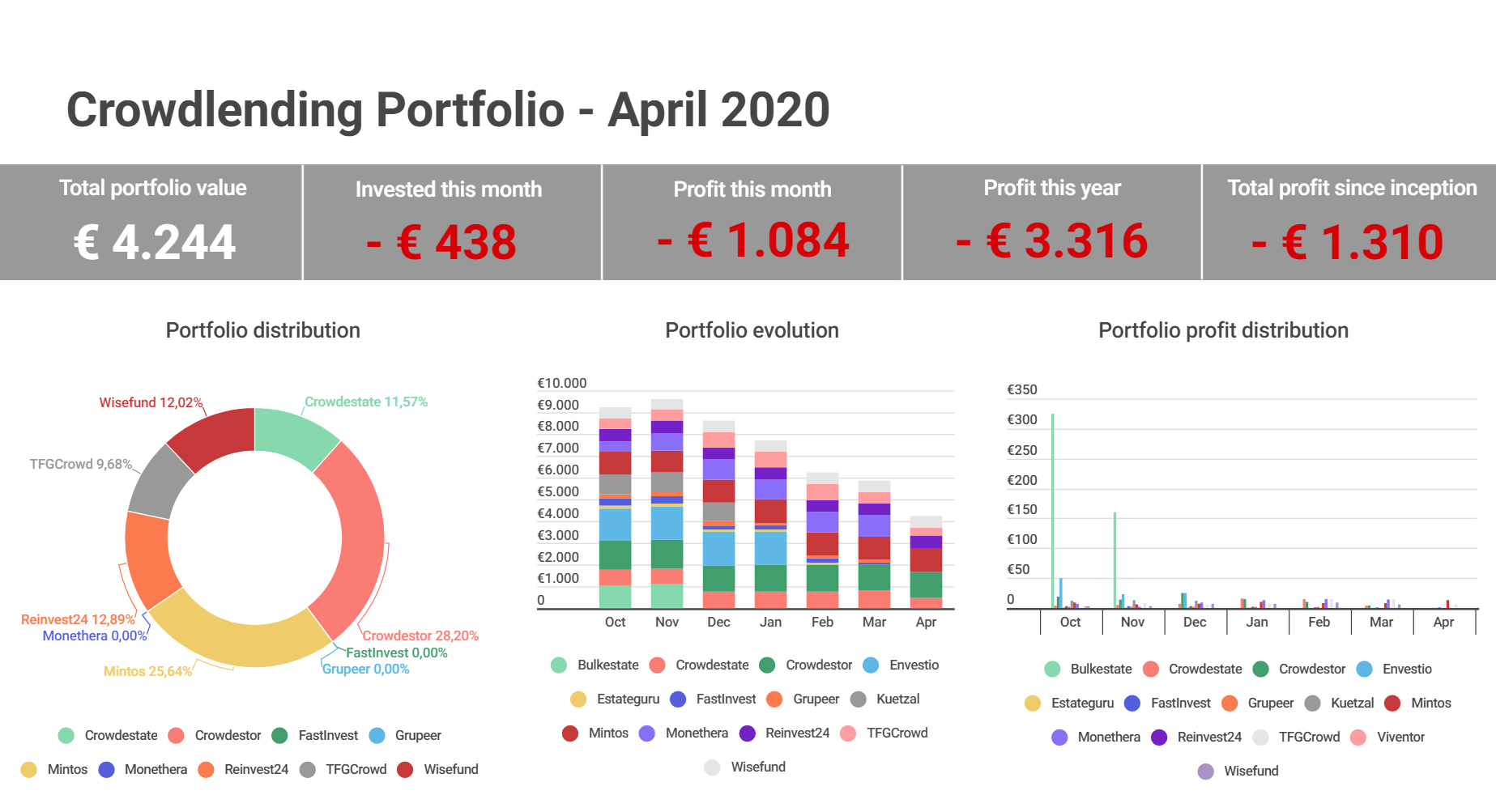 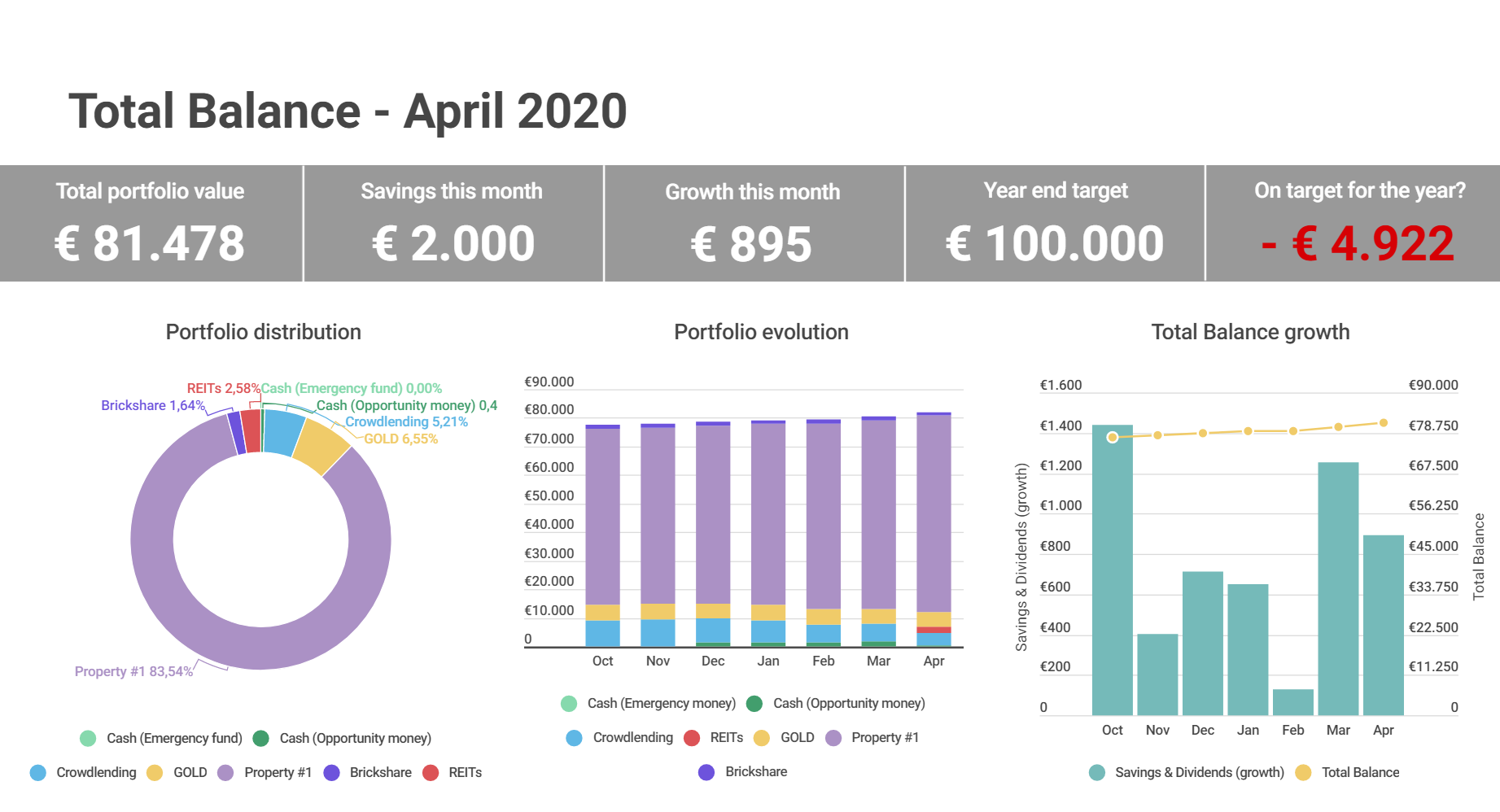 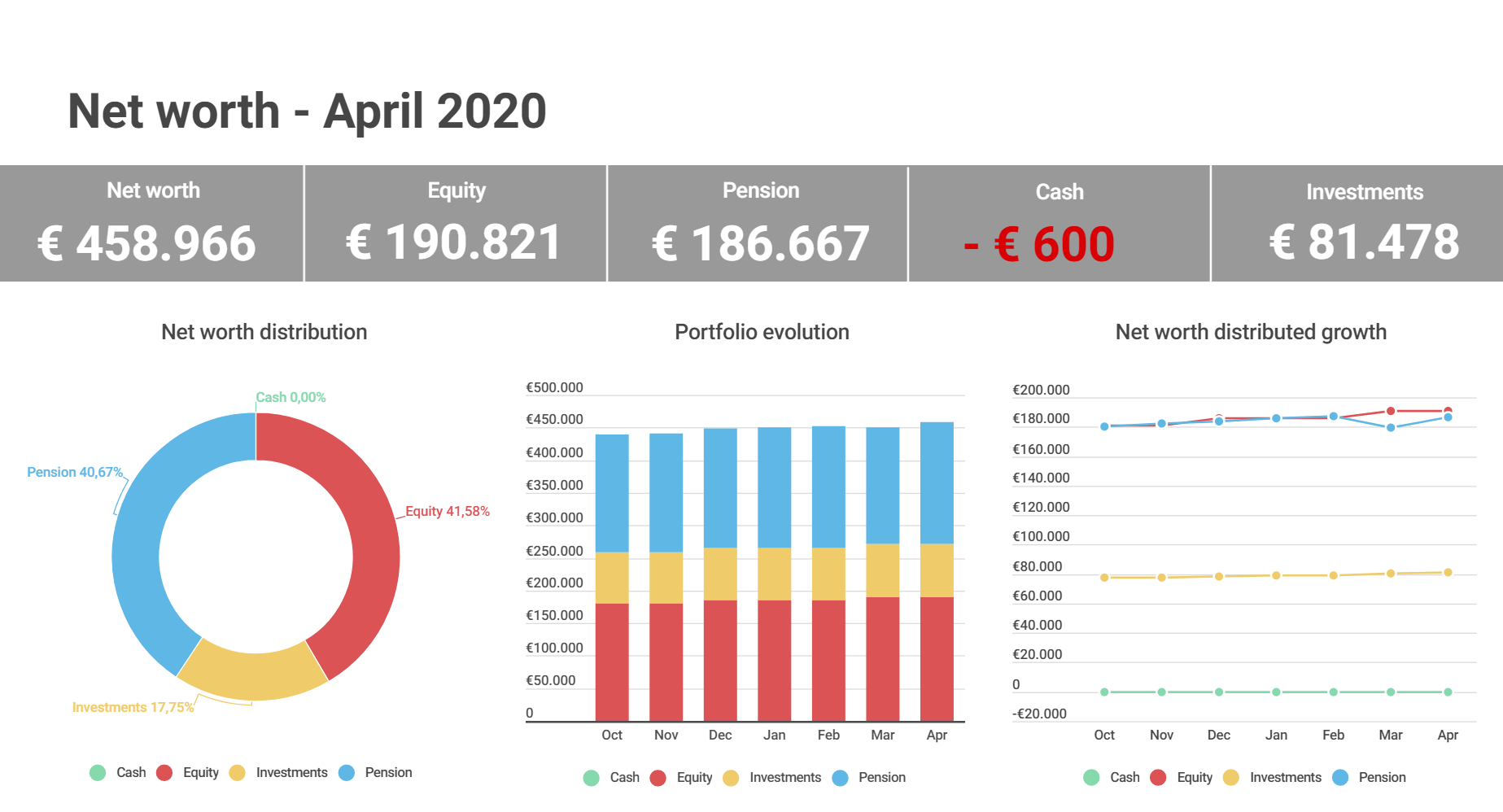 Not much fun to look at this month – except maybe my Pension. It has now almost recovered from the March loss. Yay. I tweaked my Pension AA slightly in the beginning of April, and that appears to have paid off. For now…

My total “profit” from Crowdlending now stands at -€1.310. I was kind of hoping to at least land on a positive number (before walking away), but at the current rate of “trustworthy” crowdlending income, it would take me about 5½ years to get back into the “green zone” 😮 I’m not gonna lie, this hurts. I hope to eventually regain what was lost, but at this point I’m willing to write it off as a lesson learned and move on 😉 We’ll see what happens with Crowdestor, TFGCrowd and Wisefund. Walking away with a loss is a bit of a blow to my pride, I’ll be honest – but at least it’s a manageable loss after all (so far!). It’s basically damage control at this point! I won’t be throwing anymore good cash at bad until this whole crisis has passed. We shall see how long that’ll take!…

Thanks to a good chunk of savings (I got a vacation allowance from work), I’ve managed to increase my Total Balance by €895 this month, despite the massive crowdlending write-offs of more than €1.100!

Hopefully next month will be a bit better on the passive income front – my Brickshare project has announced a small dividend payout of about €20 in May, and with my new REIT paying dividend (already announced) of about €15 that already has this month beat by a margin! 😛 Time to look ahead and be positive. Unfortunately, it won’t be until October 2023 where I’ll see my first dividend from Property #1, but it will be a MASSIVE one! It’s going to be so massive that I’m already pondering how I’m going to fit it in my chart 😛 OH WELL, I’m sure I will manage somehow.

As always, the classic growth chart for tracking purposes. 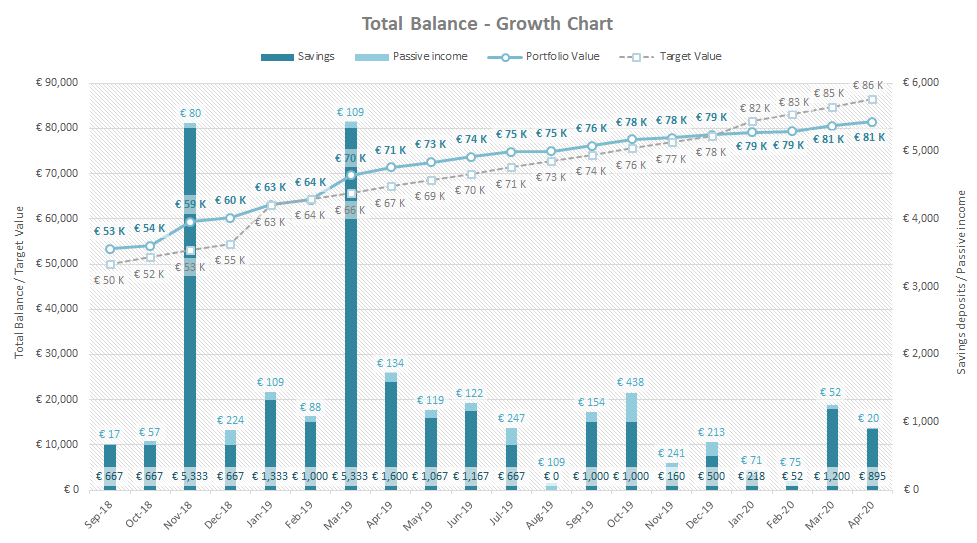 2020 boasts a new look for the Classic Growth Chart. It’s getting increasingly difficult to display the progress month by month in a clearly visible manner, so eventually I’m gonna have to switch to a quarterly view (and eventually, yearly of course). But for now I think I can manage to squeeze in another month or two in the chart. It’s so damn satisfying to look at my progress. Of course now my target is getting away from me, which is really annoying

(I will catch up eventually though!

You live and your learn. It’s so important to make your own mistakes, and to ultimately learn something from them. I’m more determined than ever to reach my goal, and my path to FIRE has become clearer than ever to me. Slow and steady (boring) wins the race.

Thanks to a little extra from work this month, I managed to once again grow my Total Balance a tad. Thanks to Mr. Market, my Pension is now very close to being back in the green, all thanks to a little adjustment to my AA in early April. This just goes to prove that you should never let a good crisis go to waste 😉

I also took the opportunity, to re-acquire PROREIT, which should give me some much needed dividends to get me through these “cold dark” pandemic months/years 🙂

That’s it for this months update, folks! Hope to see you again next month!