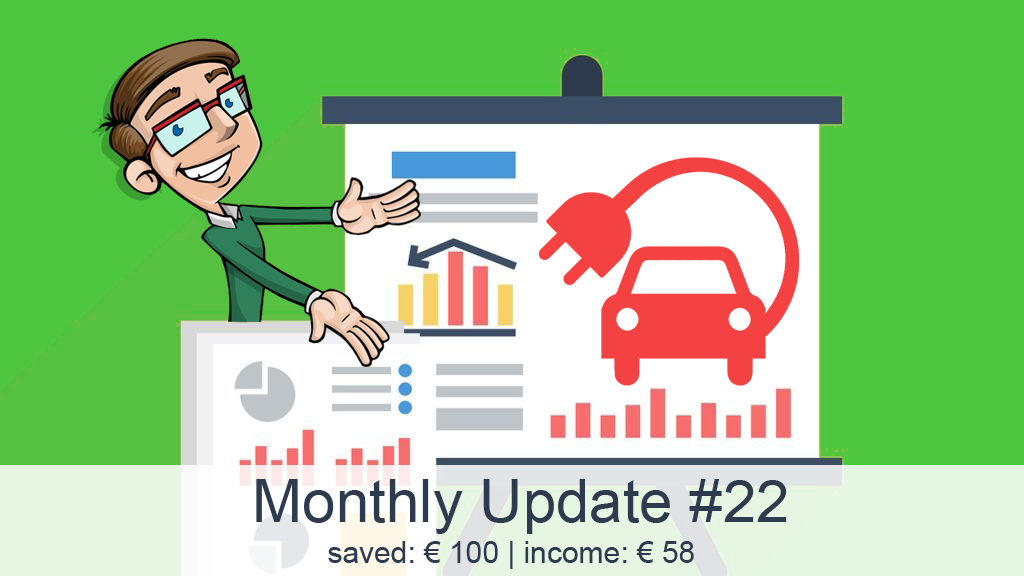 Another month has blown by in what seems as a blink of an eye. We’re now almost halfway through the summer already! Half of the year is now gone, and we’re now closing in on another Christmas already! (too soon?)

The month in the Total Balance household has been filled with highs and lows. The lowest point being the death of my beloved grandfather, who died of cancer at the age of 78. He always said he was going to become 100 years old, so unfortunately he didn’t manage to reach that goal.

It was a pretty hard blow to the family, obviously, but especially to my grandmother, as they had been married for 58 years. Losing your life partner suddenly (he was diagnosed in April while still being fairly well, albeit weakened) is obviously something that is very difficult. She is doing well in the circumstances though (her own words). She had a couple of months to prepare for a life without my granddad, and she’s a strong woman, so she will manage I’m sure. We’re going to be moving her to a smaller apartment, and they were already planning to move before he died, as they wanted to move closer to their friends (same city).

It’s been 6 years, since my other grandfather passed away (my dads father). I’m now grandfather-less, which is a very weird feeling, as I spent a lot of time with both of them while growing up. Both of my grandmothers are still alive and kicking, and I think (hope) they will stay with us for a long time to come.

Anyway, enough about death for now!

On the same day that my grandfather was buried, I handed in the keys to my old diesel-powered car (it was a lease). This was a weird emotional day, but the plans to hand-in the car was set in stone (you can’t have it for more than 3 years), so I just had to get it over with (I handed it in in the morning, and buried my grandfather in the afternoon).

2 days later, I got my new car! A short-term lease (3 months) of a Renault Zoe – an Electric car! 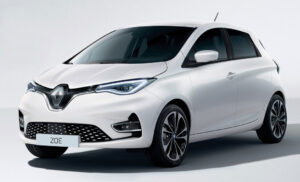 I’ve been driving it for about 1 week now, and I have to say, I’m really enjoying it! It’s a great feeling to be a “green” driver, and the fuel-cost is less than 2/3 of my old diesel-powered car.

One week was a enough for me to decide that I wasn’t going back to an ICE (internal combustion engine) car ever again (my wife still has a petrol-powered car). So naturally, being a planner, I started to plan the installation of a proper EV charger. I’m currently charging the Zoe using an “emergency” cable (a so-called grandma cable) which draws power from a regular power outlet, but hence the name, this cable is only intended for emergencies. Unless you’ve prepared a dedicated outlet directly from your switchboard, using the emergency cable is generally advised against, as a regular outlet is not meant for such high continuous power consumption (it takes about 12 hours to charge it from 0-100%).

So, in the old-style Nick-fashion I went completely bananas, and purchased all the gear required to run a cable directly from the switchboard into a brand new EV Charger. The Charger alone ran me about €850! Before I knew of it, I’d spent more than €1.500 on “stuff” (RCDs, RCBs, cables, fixings and what-not) for my new installation…

I haven’t installed it yet (it needs to be done by an authorized electrician – luckily I know a guy!), as I haven’t decided 100% on the route of the cable. First I decided to run it directly out from the switchboard along the ceiling, outside and then run it underneath the eaves of the roof. But then I decided the proper way to do it, would be to dig it into the ground, so it was completely invisible…Which would require a lot of digging…And when you dig, there’s always the risk of hitting something ELSE that was dug down – like another electrical cable or worse; the fiber optic cable for my Internet!

On second thought, I’m going to leave the details of my EV adventure for a separate post (edit: now here) 😉

Money-wise it’s been one of those forgettable months. Because of the EV-project, I’ve been unable to save any significant cash this month, and the passive income front has been so-so. I received income from my REIT, my Brickshare investment, and since Crowdestor is now paying interests on their projects again (after a 3-month hiatus), I made €27 from crowdlending this month. Far from what I used to make, but since I didn’t spend 5 minutes on crowdlending this month, I guess €27 is still free money 🙂

I got a couple of calls from BlueCapital in June (the company I invested in Property #1 with), because they’ve been spitting out projects lately, like there’s no tomorrow. They’ve all been out of my price range though, and none of them compared to Property #1 in terms of yield, so I respectfully declined participating in any of them. But it’s really nice that they think about me, and I’ve made a good connection with one of their sales people, who is working on a private project that might also contain some residential real estate. This was one of the main reasons why I opted to invest with a development company like this; to get access to (good) projects before everyone else. I’m still only interested in projects in the €50-€75.000 range, but most of them in this segment are €100.000+. Also, unfortunately at this savings rate it’s going to be a while, before I have another €50.000 to spend. Unless the money fairy suddenly decides to drop by, which is unlikely (we don’t play the lottery 😛 ). 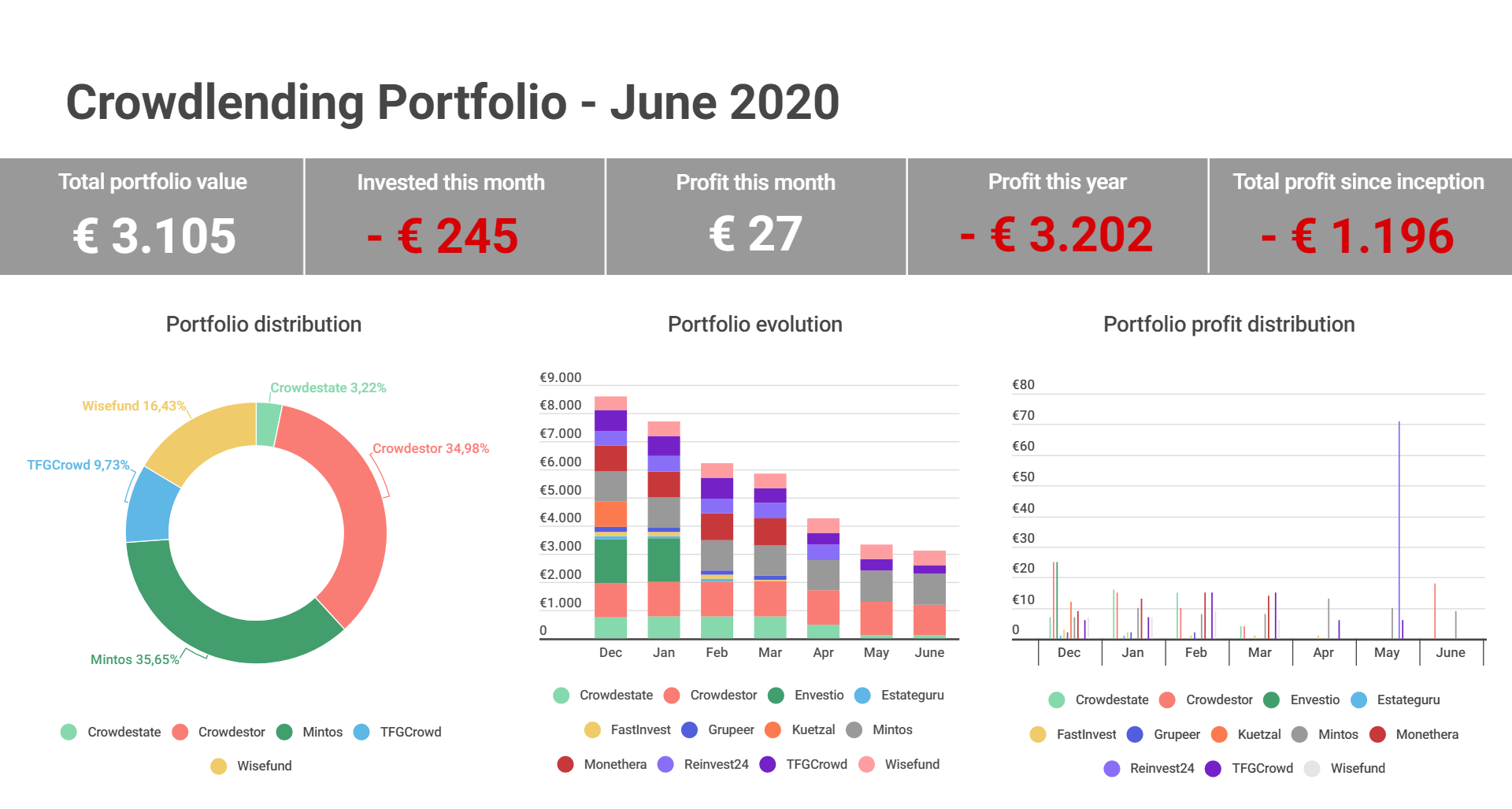 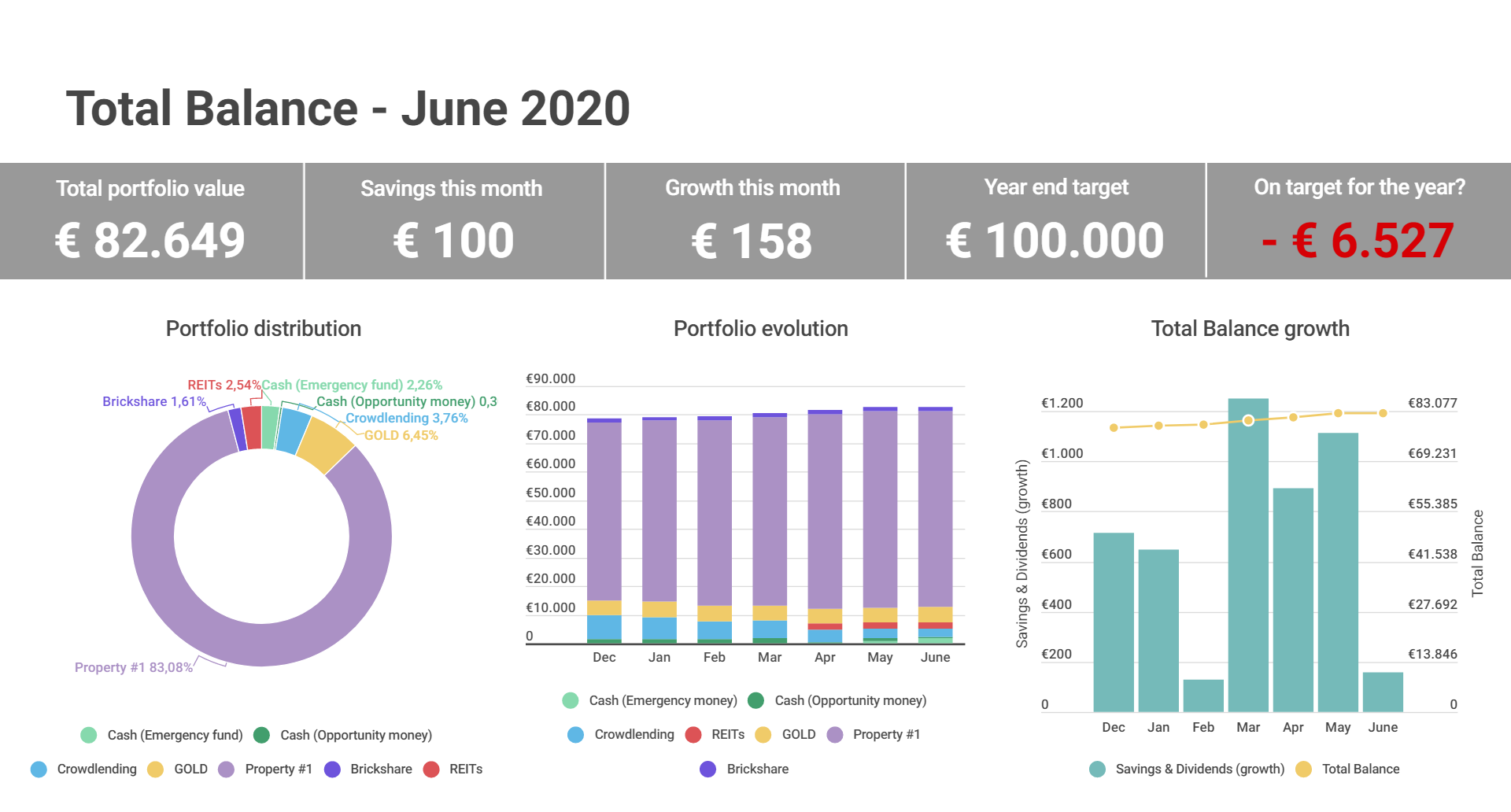 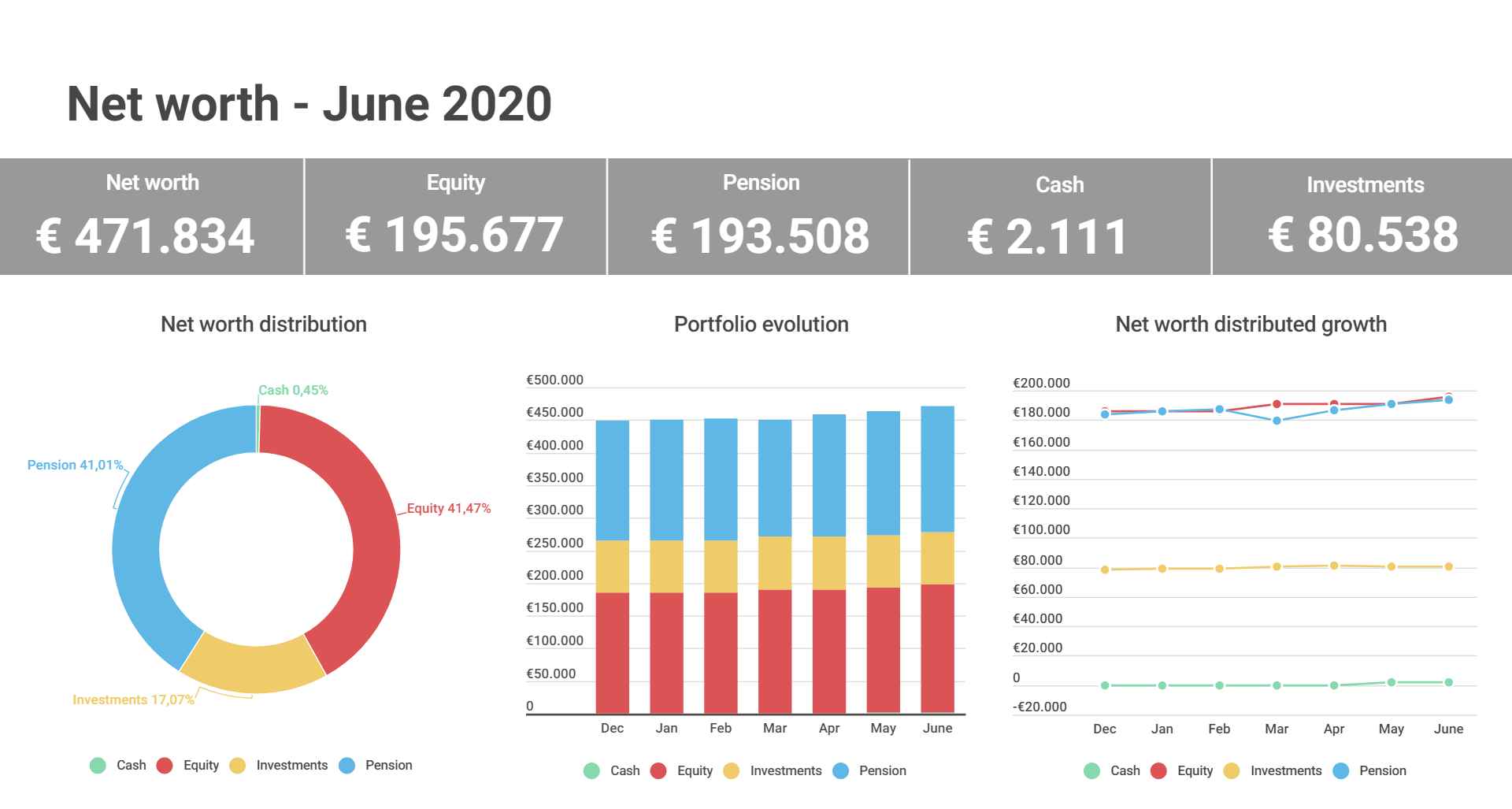 Once again the most thrilling part of these charts, are on page-3 (Net Worth). Continuous growth at least in this area, and this month was the quarterly mortgage payment, so once again my equity rise above my pension. I hope at one point to see these two diverge, but I’ve been saying that for more than a year now, so I will refrain from making any predictions about that again 😛 I’m getting closer and closer to that €500K mark though, and I have a tiny hope that I might hit that number at the end of the year. We shall see! It will depend greatly on Mr. Market of course, which has been developing kinda sideways for a while now. At least it’s not going down, right!?

Not a great passive income month, but €58 is €58 more than €0 😉 We’ve got to look on the bright side of things, right? At least no platform went bust this month! HA!

I continue to be undecided about the future of my crowdlending adventure. I would really like to at least break even (currently about €1.200 in the hole), but this would obviously require me to invest more, and I just haven’t had the guts to continue to invest in this market, when the future of these platforms seem rather unclear (still). I will continue to withdraw my money, until I feel comfortable with leaving them on the platforms. So far Mintos and Crowdestor seem to be the two most likely candidates to survive on my roster. I’m going to need more than those, though, if I’m to break those magic €100/month income from this vehicle once again…We shall see. 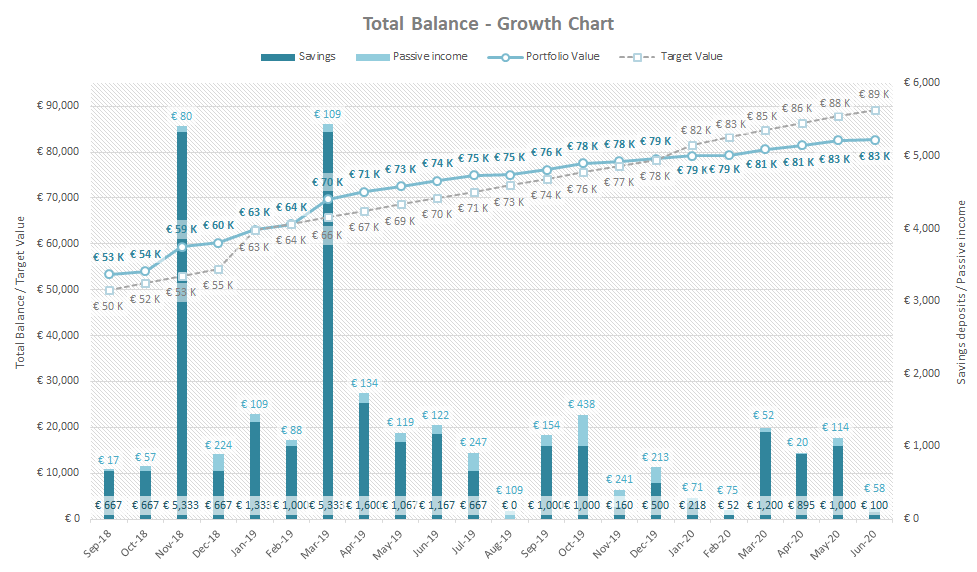 A month filled with ups and downs has ended, and to be honest I’m happy to leave June behind me. Nothing noteworthy happened on the investment front, and I’m still trying to digest the loss of my grandfather. I have mixed feelings about it though, because June 2020 will also be remembered as the first month of our EV adventure – an adventure that I hope to continue for years to come!

See you next month, and I hope you get to enjoy your summer! (I’ll be vacationing in Denmark, and right now its not looking too bright on the weather-front! Classic Danish summer-weather…Great…).