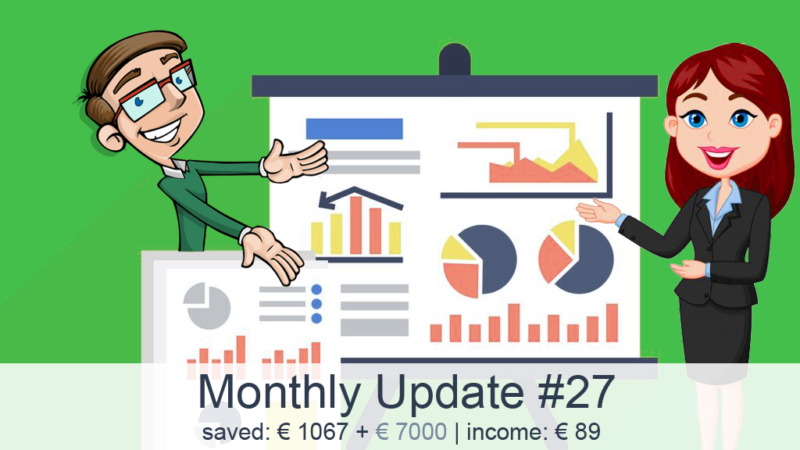 November 2020 is a thing of the past, and as is the norm here in the Total Balance household, it’s thus time for another monthly update!

So, what happened in November?!

You might have already guessed it, but look who finally decided to join the race! (YES – the missus is here!).

Mrs. Total Balance AKA TEoW (The Extraordinary Wife) has finally decided to begin investing some of her hard earned cash (spoiler alert: I forced it upon her, and did the investing for her…).

Yeah, she still can’t be bothered with doing her own research, so we decided just to put some of her cash into an ETF – and add it to our Total Balance, bringing our total for the year very close to our €100.000 target! CAN we make it across the finish line?! We shall see come December, but I don’t see why not at this point 😉

I developed carpal tunnel syndrome in both of my hands…So this is going to be a short(ish) update! I’m pretty used to it by now (not my first rodeo), so I’ve started treatment, but it takes a while to get completely rid of it (for a while at least – it usually returns again eventually).

Some of my projects started paying again on Crowdestor, so I received €20 from that platform this month.

Still trying to exit Mintos (about €200 left), and I doubt I will recover much of my investments with Wisefund. I currently have 1 project still paying interest and 3 that are defaulted.

Depending on how the year-end numbers are looking, I’m considering writing off ALL of my current crowdlending investments (except for Fundbricks – it’s a danish platform that I have high hopes in). I’ve grown tired of all the work involved in doing the monthly total for scraps, really. I just want to put it behind me and focus my energy on other ventures 🙂

I traded a wee bit of Bitcoin in my Revolut App, and made a little profit of €12 (YAY!). I’ve discovered that I shouldn’t have “lose change” in my Revolut App, because when I get bored I start trading (remember I also bought some Silver a while back?).

The trading interface truly sucks, and I’ve now convinced myself to keep € 0 in my Revolut account (only use it for transferring foreign exchange from platforms to my bank account) to avoid the temptation of currency/commodity trading again 😛 (we shall see how that goes!…).

Since I’ve decided to phase out Crowdlending completely from the portfolio, I’m considering replacing the page-1 with a Stock portfolio page instead. We’ll see when/if I get around to do it next month 😛

It now almost seem as though my targets for the year has been too conservative, when I look at the numbers. But the last two months have been exceptional savings months (for various reasons), so naturally I will not be able to continue this insane trend.

My Net worth has now blown past €500.000. Something I didn’t believe would happen until sometime next year. It feels quite satisfying looking at that number, I must say! My net worth has now grown almost €100.000 since I started doing the Infograms in March 2019. That’s huge! (All of my 3 pillars have grown significantly).

November was a great month for my Pension (invested in various indices, properties and green bonds). My YTD result on my pension is currently 5,06%. If you’d told me that in March I would have thought you were crazy. I wouldn’t mind ending the year on ~5%, considering the volatility we’ve had to endure in the markets this year. – But next year will be even better 😉 (I’m sure of it…).

The massive addition to the Total Balance this month came primarily from my wife’s savings, which we decided to invest in a single ETF (iShares Global Clean Energy). It has already grown more than 10% since we bough it, and also paid out a bi-yearly dividend in November. Not too shabby, and it really adds another level of diversification to the overall portfolio.

My dividend stocks has also been growing a lot since I bought them, so I will write-up their value in my next update (spoiler: my REIT is up more than 60%!).

All in all an extraordinary month in terms of “savings”, but pretty regular in terms of passive income.

I also traded a little Bitcoin (BTC) in my Revolut App, but decided it wasn’t worth my while (like with the Silver – but I had to try it out 😛 ) – I ended up with a €12 profit none the less, so I’ve added that as passive income this month (it was fairly passive after all!).

It feels good to once again have a proper cash-stash, albeit I now once again find myself in a bit of a pickle; I want to save to buy another property, but I also want my money out there working for me – now! Decisions, decisions. For now I’ll try to see if I can’t reach at least €10.000 in cash, before I consider investing in another Dividend stock, or maybe another “The-Many” investment? 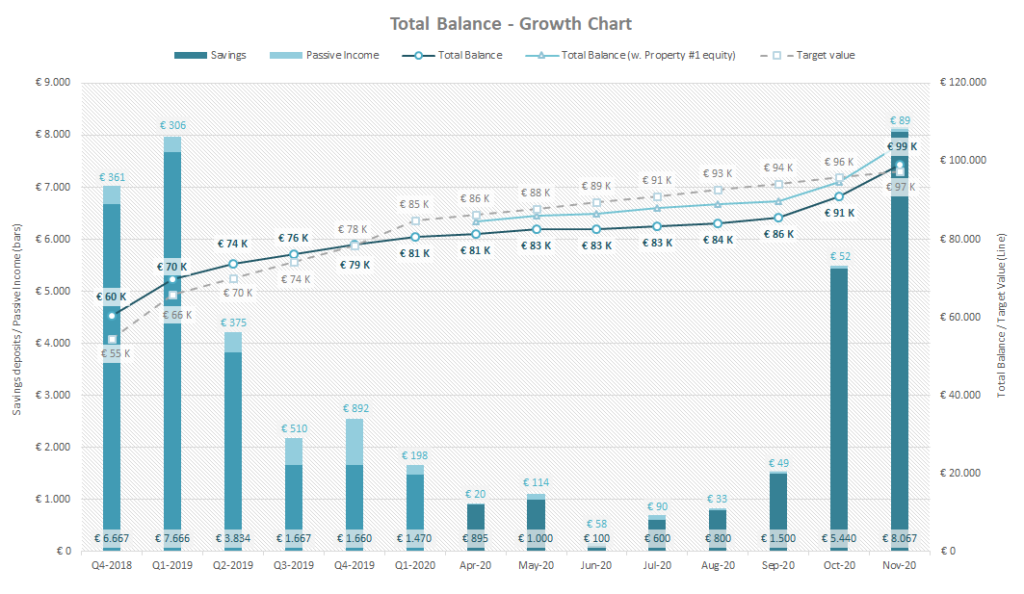 Due to the wife’s contribution to the Total Balance fund this month, we’re getting very close to our yearly target!

I’m happy to see the drastic incline in the graph, but from a visual perspective it looks a little messy! 😛 So I might fiddle a bit with the Classic Growth Chart (a new and improved 2021 edition?!) to make it a bit more clear what’s going on there…

Thanks to the addition of my wifes savings (or, some of it at least 😉 ) we now have our yearly target of a €100.000 Total Balance well within reach!

Our Net Worth also blew past €500.000, which was something I wasn’t expecting to happen until some time next year.

All in all the effects of the pandemic is really only visible when I look at my crowdlending. Many projects are delayed/defaulted, so I’d be happy to walk away with 50% of my current investments in Mintos, Crowdestor and Wisefund. Time will tell how much I will be able to recover. So far I think the losses have been acceptable. Would I have preferred a 0% loss – of course. But you live and you learn, and my crowdlending adventure has definitely not been in vain. I’ve learned a lot, and have now pivoted to dividend stocks and a single ETF, as even the volatility here seems acceptable after having experienced the wild west of crowdlending-land…

I wonder what the future will bring? More stocks, maybe? 😉

Regardless of where/when/how I place my now once again booming (everything is relative) cash stash I’m sure of one thing: There’s going to be some exciting times ahead!

Thanks for reading! I hope to see you again next month for the 3rd consecutive New Year update on the totalbalance.blog. Oh my, how time flies when you’re having fun…

How did you do this month?! Hit me up in the comments below.