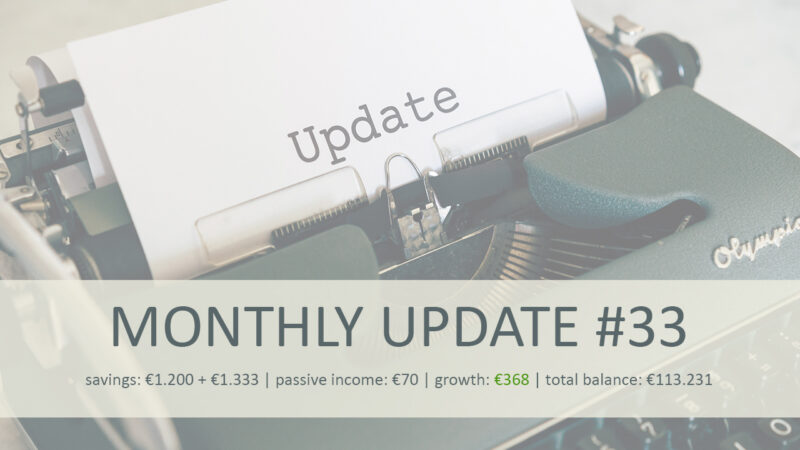 Another month has passed, and it’s thus time for another riveting update from yours truly.

May was a relatively quiet month in the Total Balance household – hence the title of this update (business as usual).

My motivation to write this month is at an all-time low. Rather than stress about it, I’ll just accept that that’s the way it is. Hopefully I will feel more motivated next month.

I really want to continue to make these updates, as I feel they provide a great perspective (especially looking back at some of my older ones). So I know the updates is providing value for myself (and hopefully also some readers?) in the future.

We’ve been on a weeks vacation with the family, which was awesome (the main reason for this update being so late). I got to play some golf again (with my brother), which I haven’t done basically since my daughter was born, now almost 7 years ago. I forgot how much I enjoyed it, so I will try to see if I can find some time to play a little more in the future.

Early in the month I somehow convinced the wife that we needed to invest in more properties – so she took pity on me and “gave me” €1333 to invest (haha! – Sugar momma strikes again!) in an older project with Brickshare (now The-Many), which I bought via their new secondary market function. We’re now invested in 3 different projects with The Many, albeit the allocation is a bit skewed (which my Symmetry-loving brain is having a tough time coping with!).

I’ve noticed that it’s very typical for the book value of their projects to drop significantly after their launch, which was also the case with the biggest one that we’ve invested €13.333 in, so I’m somewhat regretting the decision to invest in this project at the early stage. I waited more than 1 year before I invested in the “CPH – SV (Vanløse, Linde Allé)” project, because I noticed this trend. It doesn’t cost any extra fees to purchase shares via the secondary market, so it seems silly to JUMP in at the very early stage, just to see the book value drop 5%. I’m unsure of the reason behind this, but it must be some of the transaction fees that they “write off” during the first years of operation. So that’s my advice to you, if you’re considering investing with The Many… Anyway, obviously I will get some dividends from this investment, so that will hopefully even out the initial “loss” in book value. We’ll see!

Besides that nothing major happened in the month of May. Except for maybe my birthday. I’m now 38 years old. Damn…

There’s clearly an interesting race going on between my pension and our equity, and our Total Balance and the wife’s pension (See Page-3). It shall be fun to follow (not Formula 1 fun, but still ok!)

Slow and steady towards the stars! (not really). The idea with taking out a small loan (bank credit, 3.5%) to finance the purchase of Property #1.5 (yes that’s what we’re calling it, ok?!) was to motivate me to save more. So far it’s semi-working. As of writing I’ve already spent some money on “unnecessary luxury items”, which will undoubtedly reflect poorly on the savings rate next month…Oh well, better luck next month! HA! 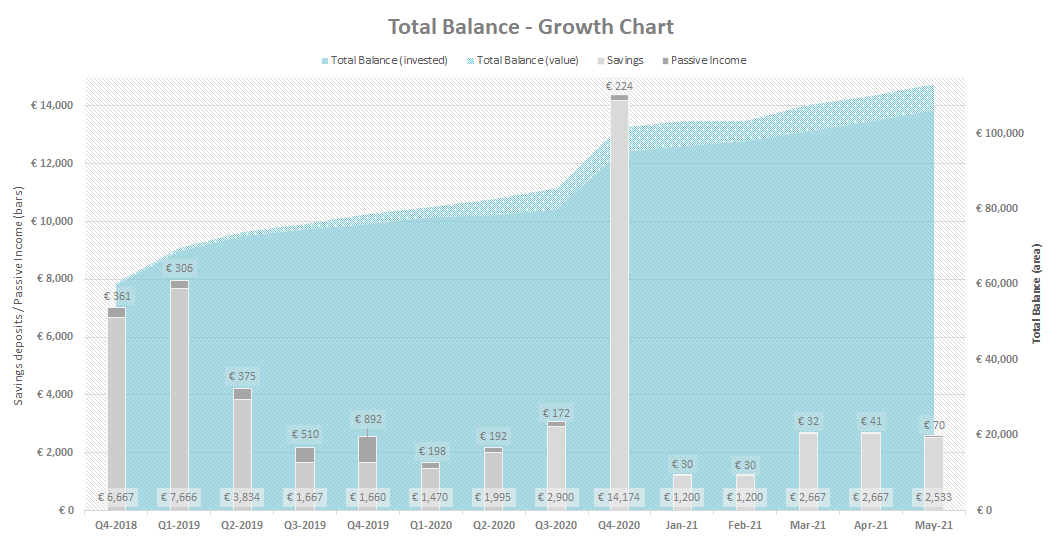 Those monthly dividends are starting to look extremely tiny, compared to previous years (the good old crowdlending days – and we all know how that ended!). I’d eventually like to see a monthly average of at least €100 again. If I can’t manage that, I might as well just quit chasing those dividends entirely… Anyway, the idea right now is to re-invest the dividends (eventually) in new dividend-paying assets. However, due to the transaction costs at my current broker (Saxo Bank) I’m not going to invest less than €1.000 per trade – and currently I only hold €216 in the account, so it’ll be a while until I can purchase more dividend paying shares…Unless of course I deposit some more funds…Which could also happen…eventually…maybe 😛

A little goes a long way. Or something like that. I added the standard €1200 to my savings, and my wife bought a little extra piece of Real Estate (via The Many). We’ve now invested in 3 different projects with The Many.

We also received dividends from 3 different sources this month. While they were not huge, I feel like we’re on the right track. I hope to eventually see our monthly dividends surpass €100 again. To achieve that, we obviously have to buy more dividend-paying assets…

I think that was it from this month. The first ever update to contain less than 1000 words. Enjoy! 🙂