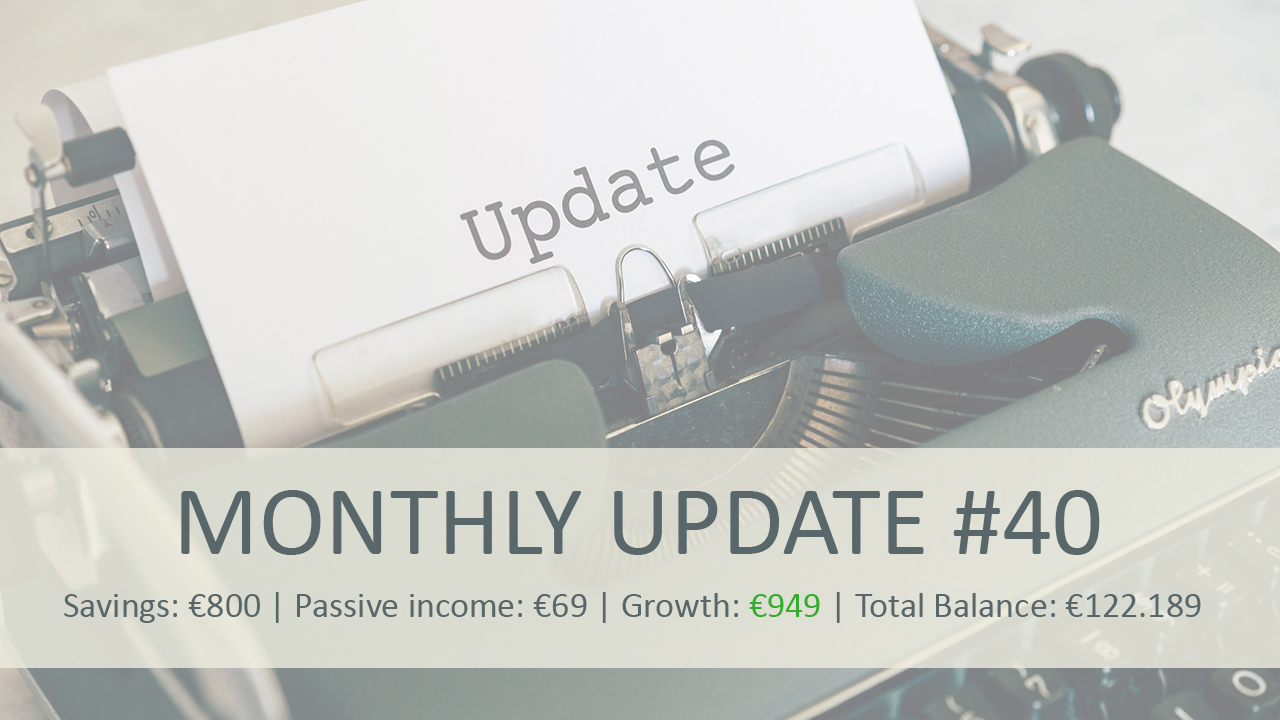 Hola people of the great and vast pool of information that is the Internet! (too much?)

It always takes a while to get used to writing a new year, but I’m already getting the hang of it I think 😛

Even though January is one of my least favorite months of the year (it’s so loooong, dark, cold and uneventful), writing the last update of the year is something that I look forward to every year!

We’ve made tremendous progress in 2021, and I’m already excited to see what 2022 has in store for the Total Balance household.

But lets not get ahead of ourselves! It’s time to have a look back at December 2021 (and maybe also a little bit of the rest of year!).

The month/year in review

As always the month is a little blurry to me! This time however, there are good reasons for the blurriness (is that even a word?).

I began my new job on December 1st, and the first couple of weeks was great, and I was really enjoying being in a new environment, with new tasks and new problems to solve. I like my coworkers and I enjoy “getting my hands dirty” again. I feel liked I’ve achieved more in 2 weeks in my new job than I did in 2 years at my old job.

In fact, I was so excited that I actually (voluntarily!) booked a train ticket to Hamburg (Germany) to go visit our Hamburg office, to install some new IT equipment (and I normally hate travel – and especially the train, because it requires me to get up way too early in the morning 😛 ).

I was supposed to leave on December 20th and return on the same day. However, on December 18th I started feeling “the symptoms”. Was it a cold, the flu – or was it something else?

It turned out, it was something else! As Kevin Hart would say: I GOT THE ‘VID, MAN!

Great. On the week of Christmas the whole family tested positive for Covid-19. As Kevin McAlister would put it: Another Christmas in the Trenches!

That kind of ruined our Christmas plans, but it turned out OK anyway, and we all survived the ‘VID (do I get like a survivors badge now?!) just fine. New year also kind of went out the window (as we didn’t know how long we would have to isolate. It turned out we were fine for New year though).

Anyway, it’s been another odd year in many ways, so it seemed like a fitting way to end it! I’m excited for the new year!

Most of our investments did fairly well (so at least there’s that!), but unfortunately we did not reach our somewhat inflated yearly target of €135.000. Far from it, actually – but I knew that it was a bit of a stretch, so I’m not beating myself up about it.

As preparations to the “last update of the year” I typically read through some of my previous posts – especially the ones from December/January, and I noticed in my December 2020 update that our previous years all had seen a 22% growth in our Total Balance, and I was happy to discover that 2021 was very close to that mark as well!

Anyway, because of the somewhat quiet Christmas and New year, we still managed to save a respectable €800. Not a lot, but it definitely beat the previous months 😛 (€0 saved because of my job change).

Stocks performed ok, while Crypto was dragging its feet a bit, but we still managed to bank a passive income of €69. For the first time in many months (feels like years almost) we’re now CASH positive! I already have itchy fingers to put that cash to work! 😛

Last month, I opened up a new Crypto account with Nexo (Celsius rival) and received a nice little “sign-on bonus” ($20 worth of BTC) and a few € interest so far. I wrote a bit about how it works here.

I also decided to diversify my ETF portfolio a bit, and I wanted to add “L&G Cyber Security UCITS ETF” to the portfolio. However, it turned out that this particular ETF is not allowed on the “Aktiesparekonto” (a special account type in DK with a lower tax bracket) – but I had already sold some of my “iShares MSCI World Min Volatility” at that point! This was a great annoyance, but it was my own fault I guess, for not checking first 😛

So instead I added “Xtrackers MSCI World ESG” to the portfolio, which subsequently means that I now have a small stake in Tesla (among many other great companies). We shall see if this addition was a good idea or not in the coming years I guess…

In other news; Gold has been doing ok lately, and since the EUR:USD exchange rate has also moved a bit in our favor, I’ve written up the value of our Gold holdings a bit (I typically only do this once per year).

I was hoping to get a payout from my last active crowdlending adventure (Fundbricks), but unfortunately they’ve pushed it to Q1-2022 due to “paperwork delays”. It’s a Danish platform, and I’ve only invested in 1 project, which is in an AA location in central Copenhagen, so I’m fairly confident that the payout will happen in early 2022 so I can end that adventure, as I’d rather use that money elsewhere.

The-Many just announced in December that they’ve been acquired by a bigger player called Selected Group (sorry, it’s in Danish). I didn’t know them, so I did some research into the company, and while I’m always skeptical about such acquisitions,  I think it could turn out to have a positive influence on the future of The-Many.

We’ll see what happens. I’ve actually requested to sell all my shares in one of the projects with The-Many, as I wanted to test out the “early exit” feature. It takes 2 months to cash-out, and there’s a 1% payout fee (the project had returned about 10%, so I think that was ok). The money is scheduled to return in January. I will most likely use the funds to buy more crypto, and maybe another dividend stock.

So all in all, a good month to end a so-so year, but with great hopes of a new and prosperous year to come! 🙂 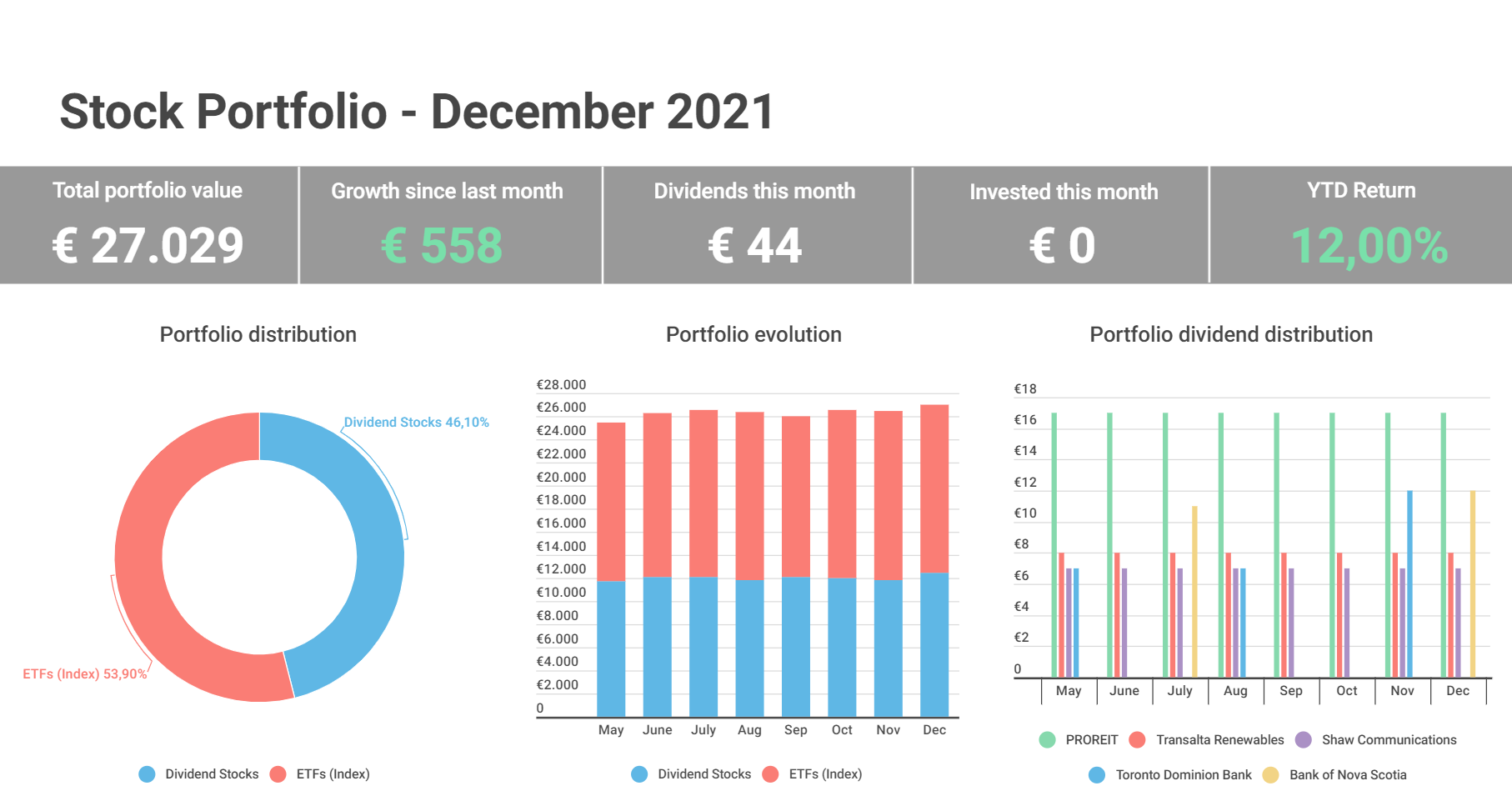 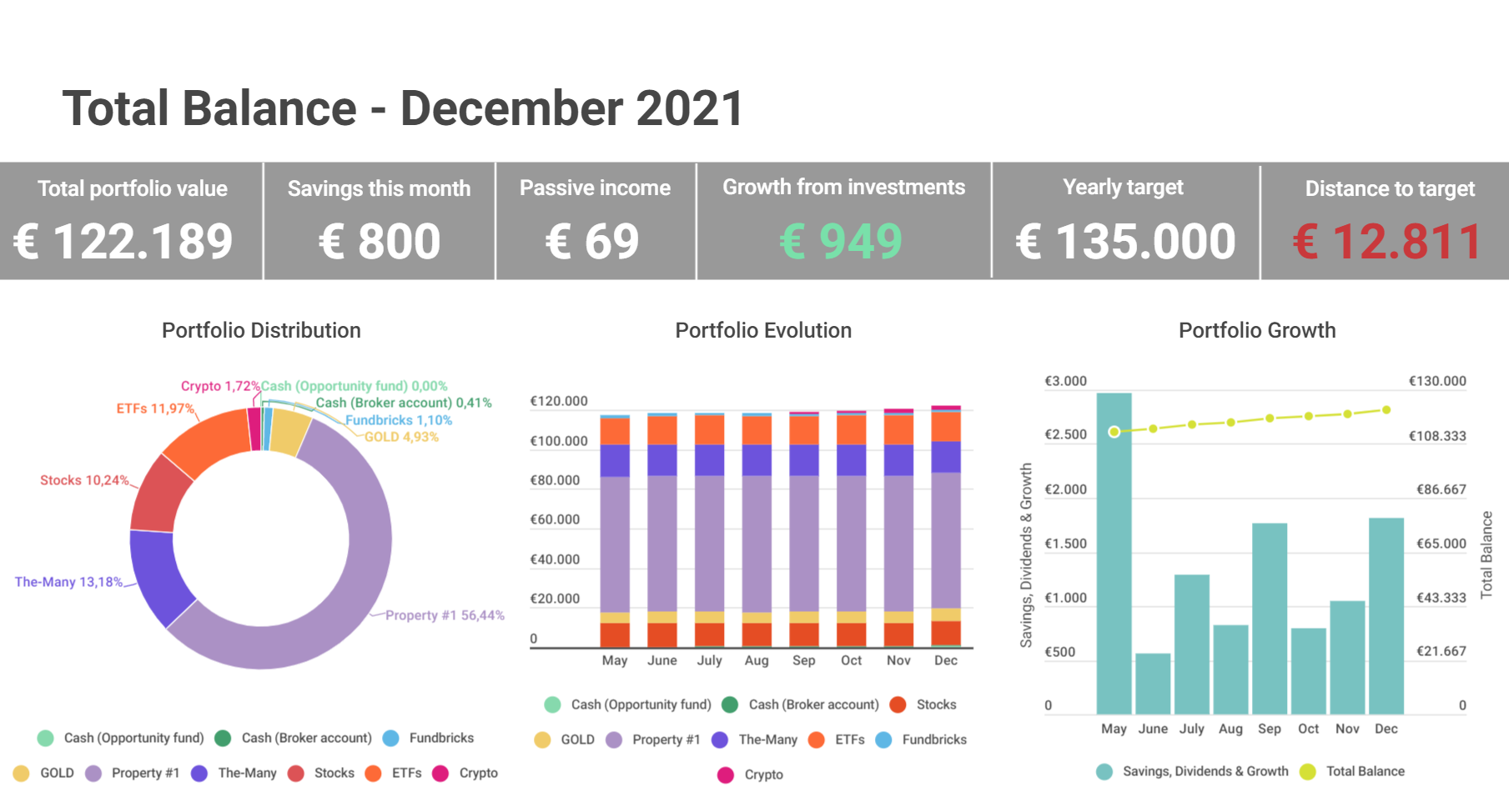 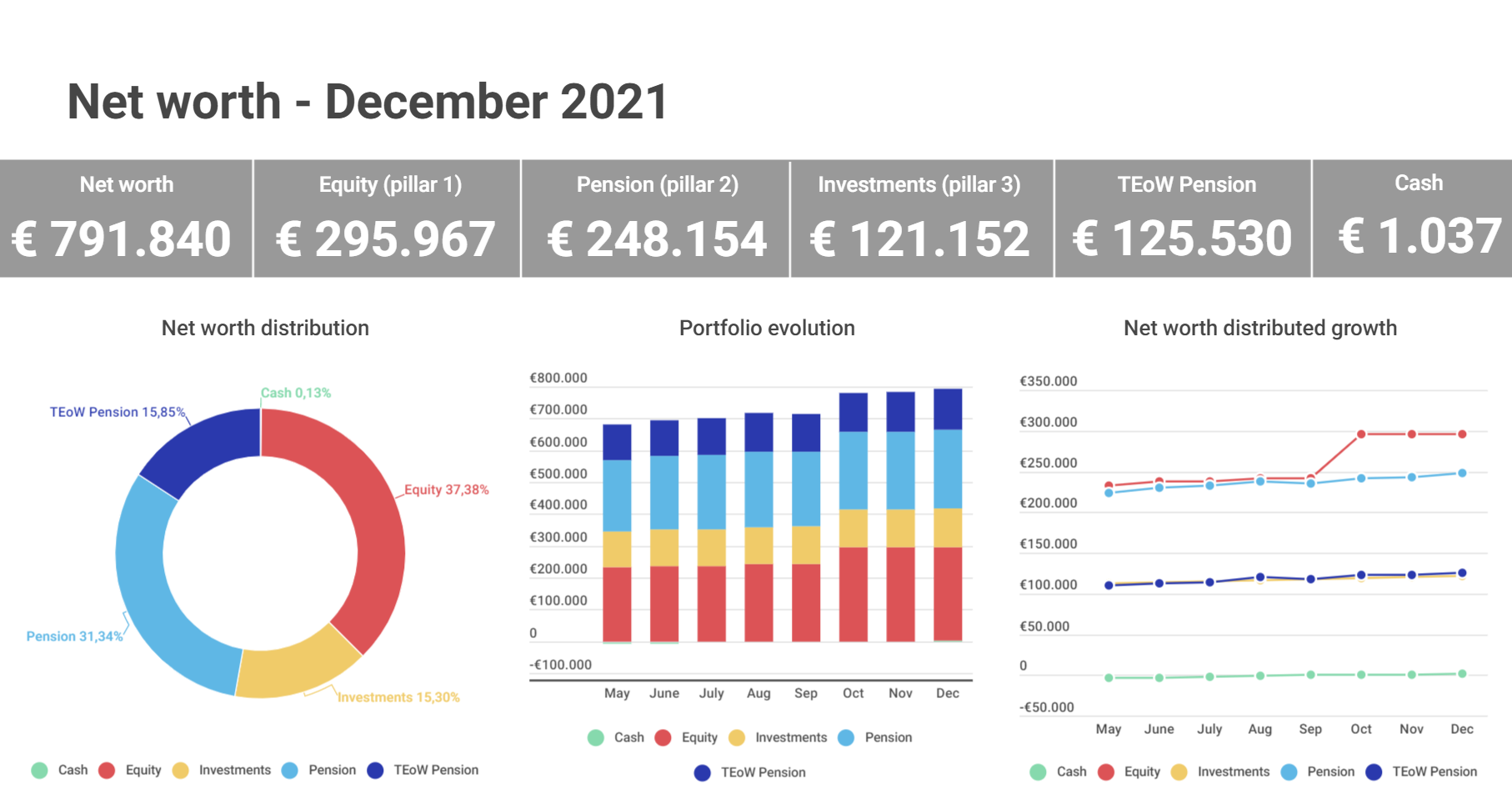 2021 turned out to be the best year ever for our Pension portfolios. My return was 2x my deposits and it was even better for the wifey. I guess that’s the magic of compounding in the works 🙂

Our NW almost breached €800K (due to good Pension returns, decent savings and a big hike in our equity due to a new valuation of our home). NW is an interesting figure to track, but in terms of FIRE it doesn’t really mean much. Most of our NW is illiquid, so the main figure of interest in terms of FI/RE is still our Total Balance (invested savings).

A decent month to close out the year. I recovered a little bit of cash from Crowdestor and Mintos, and I funneled it directly into Crypto.

I also got a $20 BTC bonus at Nexo for my first month with them. I bought some MATIC with the recovered crowdlending money. I will continue to add funds to Crypto until I reach a 5-10% total portfolio allotment.

Next month I’m hoping to see a cash-out (including interest) from both The-Many and Fundbricks. I plan to put the money back to work in Crypto and maybe add another dividend stock to the portfolio too 😛

As always I include the Classic Growth Chart for tracking purpose. 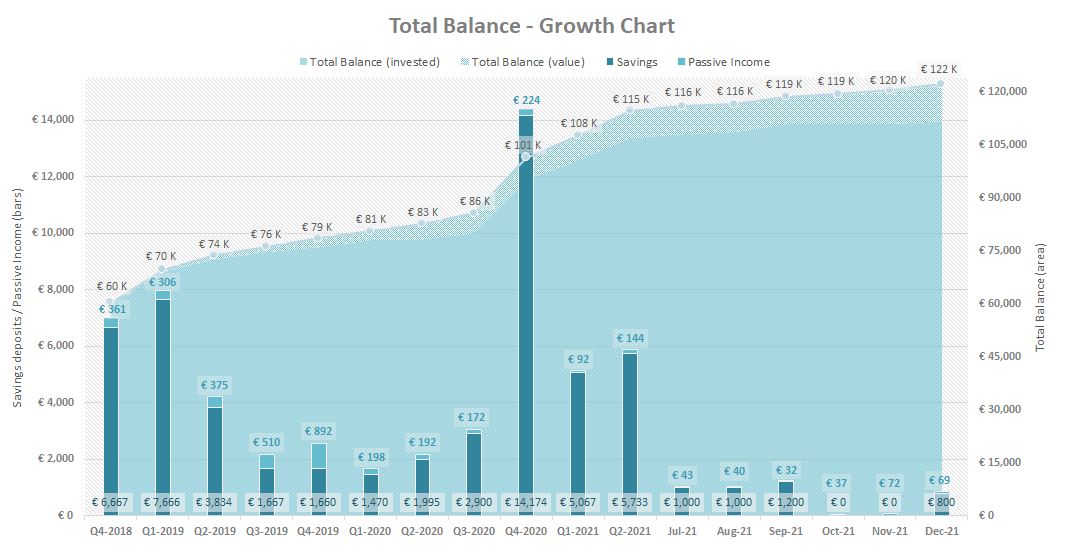 Making (and looking at) this graph is my absolute favorite task of the month. It just never gets old, and as time passes it’s becoming more and more clear that all you really need to “get rich” (eventually) is time and consistency. Consistent savings coupled with consistent returns = Financial Freedom. It’s that simple, folks! 😎

I can’t wait for those first 2022 bars to pop-up on the Classic Growth Chart! 😀

We survived the dreaded Covid virus, and had a quiet Christmas and New Years eve.

I settled in nicely in my new job, and meanwhile most of our investments had a fairly good month (except for Crypto, which had a minor dip).

Despite being in somewhat poor health on the week of Christmas, we had a productive first half of the month, and among other things I managed to spend some time buying a little Crypto (MATIC) with both Celsius and Nexo (I used some funds that I recovered from my previous crowdlending adventures). I now have two “Crypto banks” where I store some of my crypto while I earn a decent interest on my holdings.

We banked €69 in passive income and managed to save €800. Despite the effort, we did not manage to reach our yearly Total Balance target of €135.000. Far from it actually. But that’s ok – it was a pretty far fetched target anyway 😉

Hope to see you (again) next month. Thanks for reading, and Happy New Year to you all!