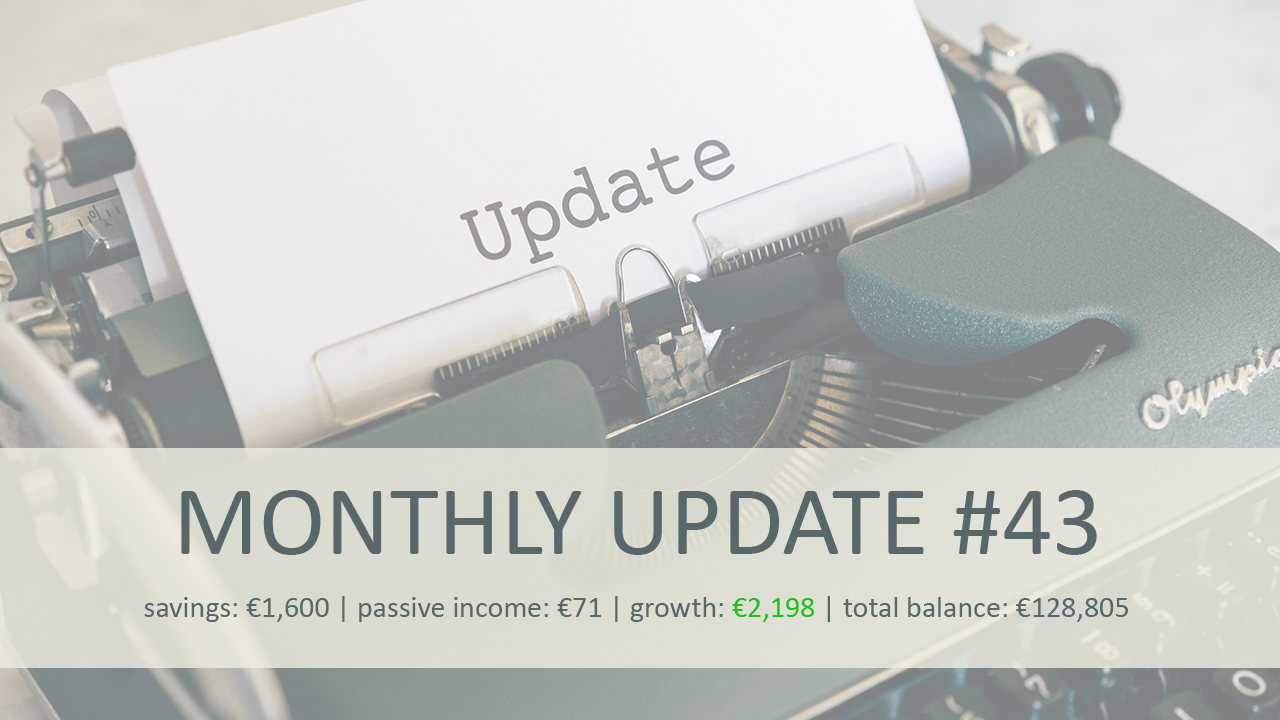 Another month has gone by and we’re now 1/4 into the new year. My oh my how time flies!

As is the norm, it’s thus time to take a look at our finances for the past month.

The end of March 2022 was an important milestone for the Total Balance household, as we’ve been preparing to remortgage our primary home for years now – and the date finally arrived. Much to my regret, the timing could (probably) not have been worse. I’ve watched in disbelief how the interest has just kept climbing and climbing and climbing for the past couple of months.

In the fall last year I’d asked my bank to “run the numbers” on how we could remortgage our primary home. Since we were now below 60% LTV (thank you Covid-19…) I wanted to move into an interest-only loan, in order to diverge cash flow from going into home equity and instead put it towards investments. At that time we were looking at an APR of 0.50%. Considering the current levels of inflation 0.50% is pretty much nothing, right?

This was how our equity was split going into the year 2022 (AKA The 3 Pillars of wealth):

Now, due to some technicalities we decided not to remortgage ahead of schedule (it was scheduled for March 31st 2022) because it would mean we would have to pay a little “get out of the loan ahead of time”-penalty (this is basically one of the major downsides of the flex-mortgages). HOWEVER, had I known that the interest would suddenly begin rapidly climbing (thanks a lot, Mr. PUTIN!) in the beginning of 2022, I would have gladly paid the “fine” for exiting our flex-loan agreement ahead of time. It felt like a big chunk of cash at the time – but it was peanuts compared to what it’s going to cost us over the next 3 years.

Anyway, there’s no reason to cry over spilt milk – what’s done is done and it can’t be undone. The only thing we can do, is try to learn from it; If you have the chance to secure a low interest at a reasonable cost (seems reasonable in hindsight – but not at the time) DO IT!

Our new APR: 1.69%. More than 3x our original offer! Now, I’m fully aware that in historical terms an interest rate of 1.69% is still extremely low. It’s just that not only have we seen the cost of energy explode – now we’re also seeing our “rent” explode. So it feels like the Universe is somehow stealing our money while we sleep!

I have to admit that we’d become somewhat “speed-blind” in terms of interest rates. Since we purchased our first home in 2009, the interest rate has basically only been going in one direction; down.

It has taken me a couple of weeks to recover from the shock I’ll admit (I’m still not fully there). I was aware that the interest rate could not stay below 0% forever of course, but to see our “rent” (this is how we view interest) triple within a timespan of 3 months has been extremely painful.

Especially since I had the chance to avoid it. Had I just taken that original deal, we would have been a lot better of for the coming years. At the end of the day, I have to view it from a pure math-perspective. If I have to pay 1.69% APR on money that I can put to work at 5%+ APY, then that’s still a good deal. It’s in situations like these that it’s important to try and turn off the emotions and turn on the financial intelligence. We’ve made our bed, now we must lie in it! 😀

So anyway, for the next 3 years we’re interest-only. The flex-mortgage will allow us to start amortizing again after those 3 years – should we so choose – or we can extend the interest-only period for another 3 years – or 1, 2, 4, 5 or whatever. At this stage we can’t really say for sure what will happen in 3 years (if the interest rate has tripled once more, we will probably start amortizing again – but I think that’s an unlikely scenario). I suppose it will all depend on whether we manage to put those saved amortizations to good use elsewhere. Time will tell!

In other news, I was happily surprised to do the monthly tally this month, as the markets has been kind to us during March. Both crypto and stocks had a good month, so we’re once again soaring towards new highs (our pensions are still a bit down for the year though).

I put last months savings into Nexo (EURx) and bought some extra Nexo tokens to get above 10% of the portfolio (this grants me access to the 10% APY on EURx). At this point I can’t really decide whether to just bet it all on Nexo (put any future savings in here), or whether to leave it where it is for now…Thoughts on this subject are welcome, but most of my readers seem to be on the conservative side, so I think I know what ya’ll are gonna say already 😛

The Many has announced that they’ve sold off all the properties that I’ve invested in. It’s really a shame, but given that the FSA as been up their ass from day 1 (and still they can’t seem to agree on the terms of running a prop-tech platform), this is probably for the better. They have not disclosed the finale sale-price yet, but they are selling at a profit. The big question is, whether the investors will see much of that profit, after they’ve paid all the stamp fees and lawyers etc. We shall see. The sale will not finalize until a couple of months, so I don’t expect to see the money back before the summer. I’m in no rush, as this leaves me with ANOTHER problem; WHERE do I place THAT money?! HAHA, this is clearly a first world problem, so I won’t complain about it 😉

Second consecutive month where we’re seeing growth rates north of €2,000. Not bad! I don’t expect it to continue though – but I’m not going to complain if it does 😛

A somewhat standard passive income month this month but a great growth month for both crypto and stocks.

Savings was a bit above average, which I’m hoping can become the norm for the next couple of months. I’m trying to save as much as possible obviously, but with an old house and a somewhat lavish lifestyle (we like the occasional takeout you know) and not to mention the insane inflation rate we’re seeing these days, you never really know what expenses might be luring right around the corner! 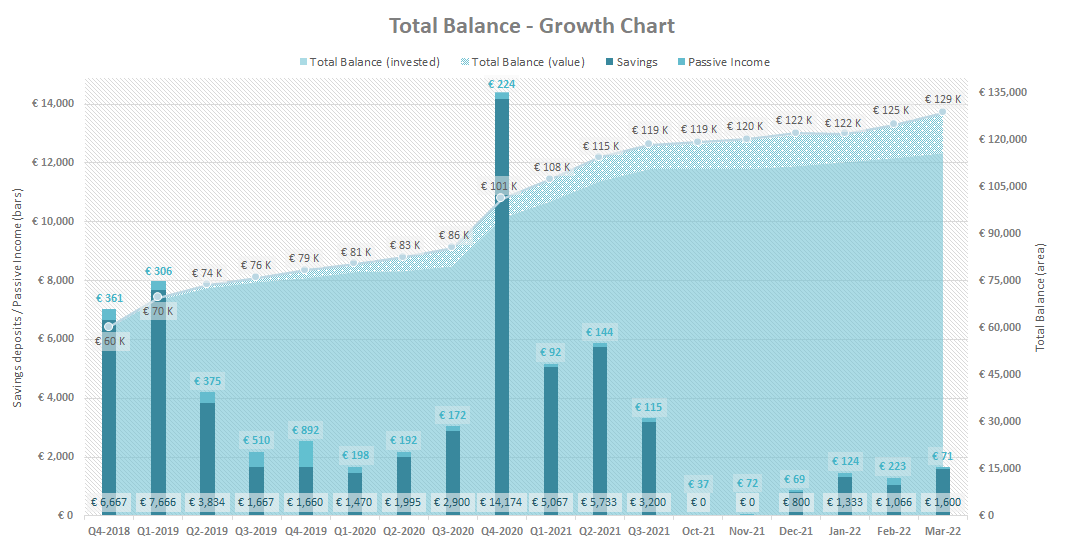 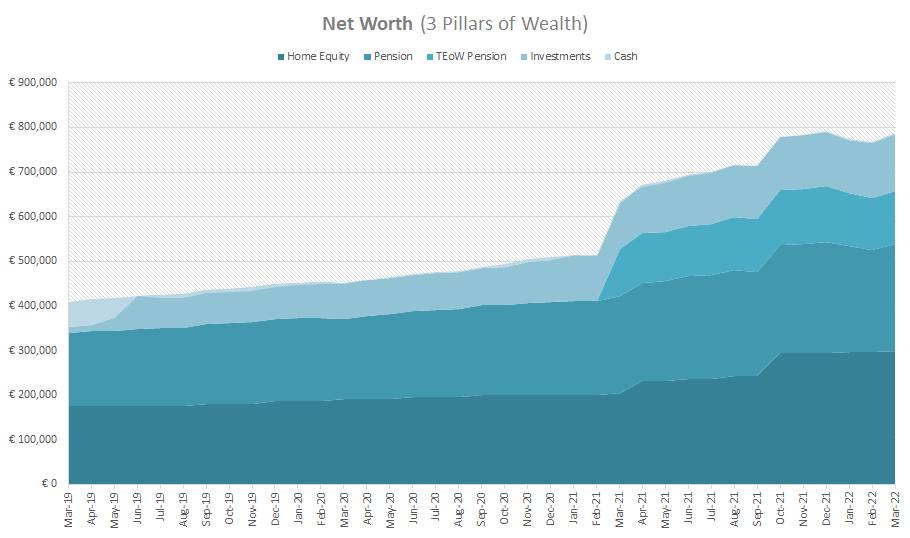 As always, I’m pretty cash lean…This has become the norm – until my investments with The Many are liquidated 😉

The total returns on our Total Balance currently stand at 9.9%. I think that’s very respectable, given the market situation for the past couple of years and the fact that our main investment class is real estate. We’re currently not writing up the equity value of the stake we have in Property #1 on an ongoing basis, but at one point we’re going to (our tenants add about €8,000/year in equity via the principal payments on the loan every year). This will mean a quite significant boost in our Total Balance.

Our primary home got remortgaged using a 3-Year fixed-rate flex mortgage at 1.69% (including bidrag/contribution). This was 3x what I had hoped – but you win some and you lose some. This was definitely a major loss and a big blow to my master plan.

Anyway, the coming years will tell whether we can invest our principal savings at a higher rate than ~2% (I have my hopes up – but you never know, right?).

Both crypto and stocks had decent months, so all in all a good month for investments. Passive income was average, but savings was above average. YAY! You have to celebrate the small wins, right? 😛

I hope to see you again next month for another update from yours truly. There might be some interesting news to share… 😉