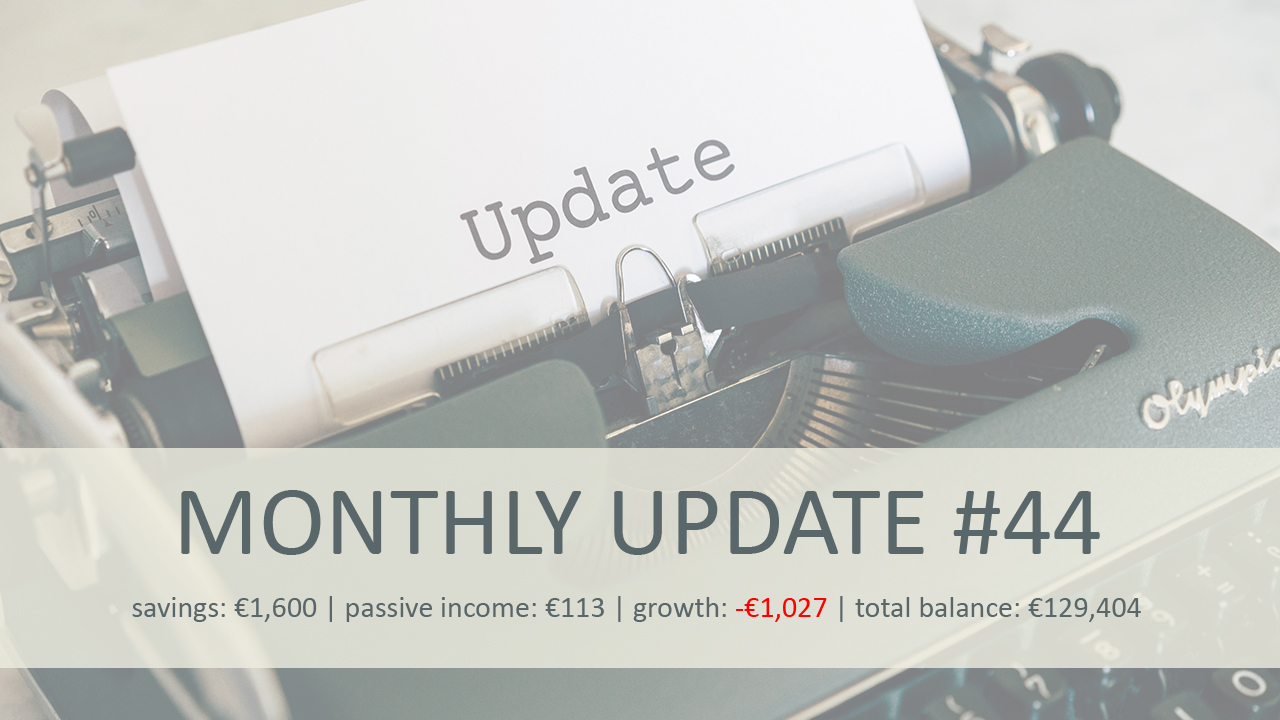 Folks, I know I’m a little late to the party this month – but it’s time for another update.

Summer is almost here! It’s crazy how fast time flies when you’re having fun (also when you’re not it seems…).

April is a thing of the past, and unlike the trees my portfolio has NOT been turning green during these past couple of weeks.

Oh my. These red months are never quite as fun as the green ones – and since we’re already well into May we can safely say that it’s unlikely for may to turn green either. But it comes with the turf, so there’s not much we can do about it, eh?! I only wish I had more cash to throw on the FIRE! m00hahaha (oh wait; I got Ca$h incoming, don’t I? 😛 )

I feel like I’ve known you guys long enough now to level with you; I’m not the most organized person in the world. In fact as I write this, I have absolutely no clue wtf happened during the month of April…It’s more than 1 week ago! It’s out of my mind by now!

I should really start writing shit down HAHA. I had to go through my account statements to track what actually happened to my savings in April. I managed to chuck away $1600 this month, and they went straight into Granite REIT. In hindsight that might not have been the best of ideas. Just like the rest of the market, it’s also down. Annoying as that may be, you can’t really time your buys perfectly every time, so I’m gonna have to just suck it up and wait for it to recover (because just like the rest of the market, it will recover – eventually…I hope! 😛 ).

Crypto also had a bit of a wobble, and obviously the May update is gonna be heavy with the latest development in the crypto-world (it’s a fu**ing bloodbath). Luckily I do not have a lot of cash in crypto, but I have enough for it to be annoying! HAHA

Anyway, we have yet to pull the trigger on our plans for a solar roof. I can’t really get the math to line up, so I’m not ready to pull the trigger at this point. Given most of my financial decision to “wait it out” has not done me well in the past months, this too could end up proving to be the wrong decision. But I suppose if you follow your gut long enough (basically chicken out enough times) you’re bound to get it right eventually, right?! HAHA

In April we also took a small holiday to go visit a small town “in the countryside”, where we were planning to (maybe) buy a small vacation home (an apartment overlooking the harbor). But yet again we were disappointed (we still like the area – just not that one apartment at that price point), so we decided to let that one go as well. Basically this entire year has so far been a year of “no-action decisions”. It’s getting a little frustrating at this point, but I’m the type of person who believe in trusting my gut. If something doesn’t feel right, I will walk away. I believe the right deal is out there, and we will add Property #2 to the roster eventually. As of right now, I don’t know what, where or when – but when I see it, I will know 😉

I received a bonus from Nexo this month ($25 in BTC) from someone signing up using my referral link (Thanks, Tony 😉 ), which is the reason why my crypto income made a nice little jump this month. At the current rate that crypto is going, I don’t expect that part of the portfolio to deliver much for the remainder of the year. But maybe it’ll surprise me with a huge Santa’s rally come December, who knows? 😛

I’m not a religious man, but this months Savings+Dividends+Growth equates to € 666…We’re all doomed! m00hahha

Despite the decline in both stocks and crypto I’ve managed to push my Total Balance to a new ATH.

€1600 in savings and $113 in passive income. All in all a respectable month in terms of savings and income 🙂 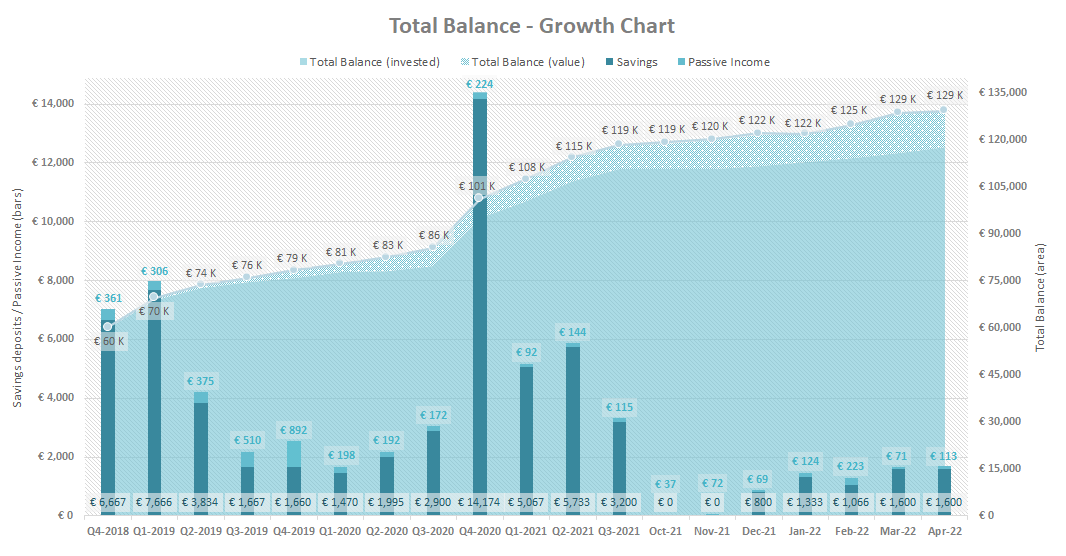 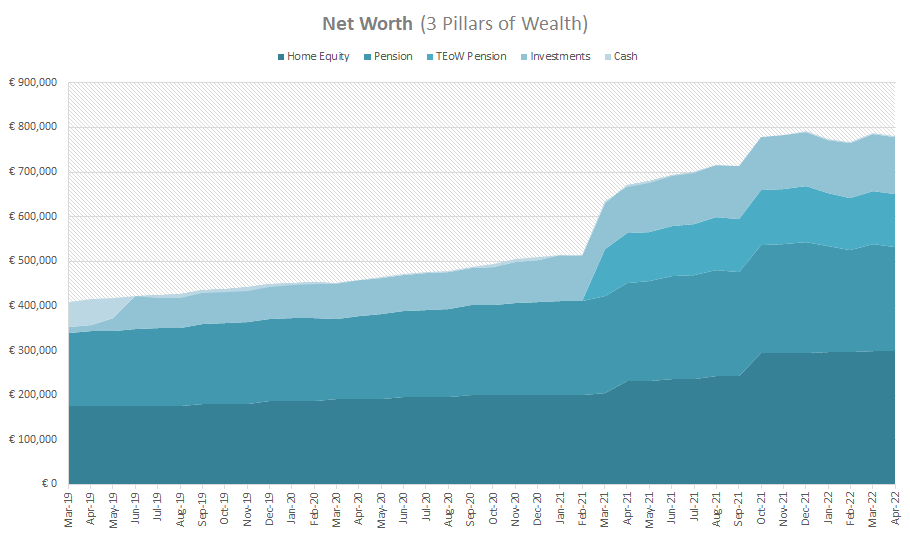 If nothing else I can at least enjoy the progress we’ve made so far. We typically see a couple of red months in the average year, so hopefully we won’t see that many more in 2022 (yeah, keep dreamin’, pal!)…

I added €1600 to my savings and instantly converted it into shares in Granite REIT. Not exactly the perfect timing, as it has tanked about 10% since. Hopefully time will heal that wound 😉

Stocks and crypto wobbled, but I managed to bring home a respectable €113 in passive income this months – of which $25 in BTW was due to Tony using my Nexo referral link. Thanks, Tony – and I do apologize for the latest development – especially in the Nexo token. We just can’t seem to catch a break, can we? 😛

We’re still searching for a potential Property #2. I know it’s out there – somewhere 😉

In the light of everything that’s going on in the world right now, I’m cool with hanging on to some cash for a while. I’m sure there will be great deals to be made, once everything calms down a bit.

That’s it for this months update! Hope to see you again for the next one 😉