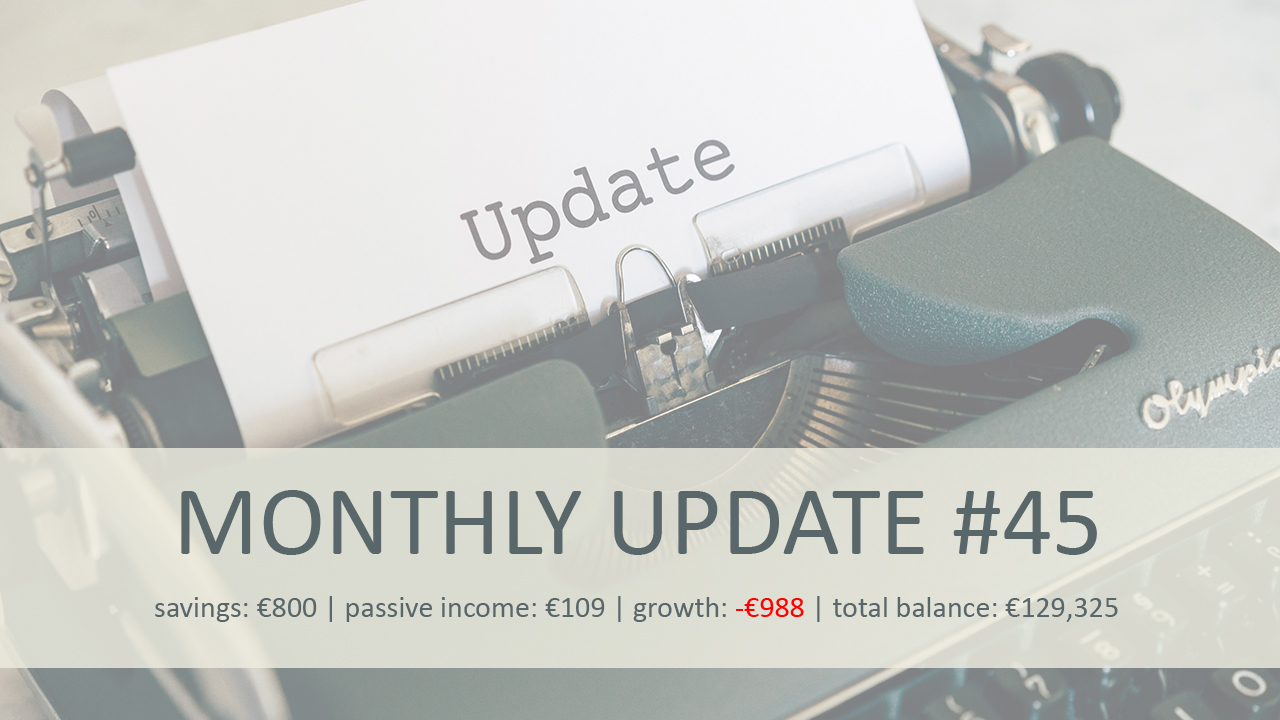 Here we are again!

It seems the months fly by faster and faster during the summer season. In the winter-time it feels like the months go on forever!

It’s summer already, and I’m already starting to dread (a little) the 21st of June. Why? Well, for two reasons:

My grandfather always used to say: “There’s no point in worrying about something that hasn’t happened yet”. I really try to live by that statement, but it somehow seems to be getting harder and harder HAHA! The older I get the more I worry about everything and anything.

Anyway, it’s another red month so lets just get on with it, shall we!?

R.I.P Terra Luna. For those of you who doesn’t follow the crypto space there was a major collapse in one of the Top-10 cryptos. I won’t bother you with the details, but it shouldn’t come as a surprise that you actually CAN loose all your money, if you put it into crypto. Unlike Gold, Silver, Wheat or Oil, there is nothing physical backing a crypto currency, so in a sense it is not real.

The funny thing is that the money I lost on LUNA I had actually already lost once before! (HAHA?). It was money that I had “recovered” from another failed adventure (Crowdlending), so in a sense both the LUNA and the money I used to buy it didn’t exist 😛 Anyway, about €500 disappeared from my Total Balance over night on that account. That kinda sucks, but such is the game! Of course it’s never fun to throw away money, but somehow it hurt less than the first time I lost it HAHA.

Anyway, is this going to deter me from continuing to invest in Crypto? Well, for now I think I have what I’m willing to gamble with “invested” in Crypto already, so I will not be adding much more cash to this asset class. I’m still playing around with Nexo a bit, so my main goal with Crypto at the moment is basically just to reap some interests – but since I’m now €500 in the hole, it’s going to take a while to recover that! (I’m still up overall though, albeit not a lot).

In other news: I finally received some good news from “The Many”, who announced in the spring that they had sold all of their properties. This came as quite a chock to many of the investors, and people has generally not been happy about this development. However, they did manage to sell them at a decent price, so all investors will get their money back + some decent returns. I’m not complaining, but will refrain from celebrating until I see the money in my account (old habits die hard 😛 ). They actually called me up yesterday to ask if I was interested in any of their new projects. They have two projects online on the platform, but unlike their previous projects there is no early exit option in the new ones, and they run for 12 years! I doubt many of the current “The Many” investors is interested in binding their money in an investment for 12 years! I’m certainly not interested, so I respectfully declined. I have not done any deep-dive analyses of their current projects, but since they are now owned by Selected Group I believe their projects are decent, and I’m sure they will generate a nice profit – but to me the main attraction of The Many was the early exit option. Without it, I really don’t foresee a bright future for The Many, but that’s just my own take on it. What do you guys think about this development?

We spent a few vacation days in May on the gorgeous Danish island of Bornholm. We love it so much there, and we typically go once or twice per year. Unlike the rest of Denmark, Bornholm is a granite-island, and it has such beautiful scenery and a special “summer” vibe. In fact, we have been playing with the idea (for years now) of owning a small vacation home there. And we actually finally found one that we liked. We even put in an offer on it…Will it become Property #2?! We don’t know yet… 😉 Time will tell! I will be sure to keep you posted 😛 haha

If any of you dear readers have any experience with vacation rentals as investments, I’d love to hear from you 🙂 – Good or bad!


Not much to say about the pretty colors – except I’m getting pretty tired of looking at those RED numbers – and so far June isn’t looking much better :S

Passive income was $109 this month, which is pretty average I guess. It seems a bit pointless to be making €100 and then having to write-off €500 in the same month…Oh well, better luck next time, right?! 😛

My Savings this month is unfortunately below average, because I’ve had to dilute some funds to pay for our summer holiday and to start saving up for a new pair of glasses. (Again! Remember this one?) 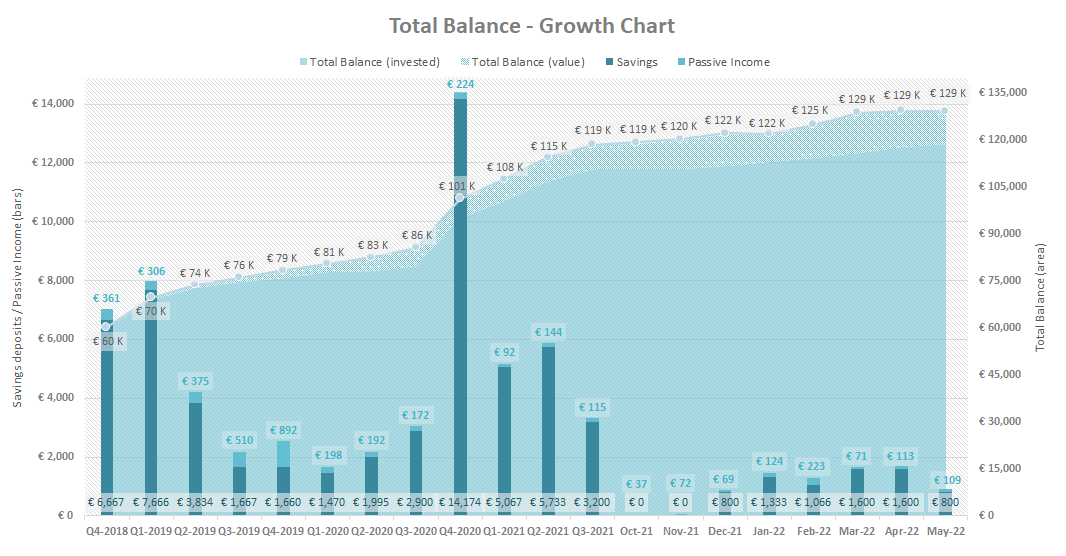 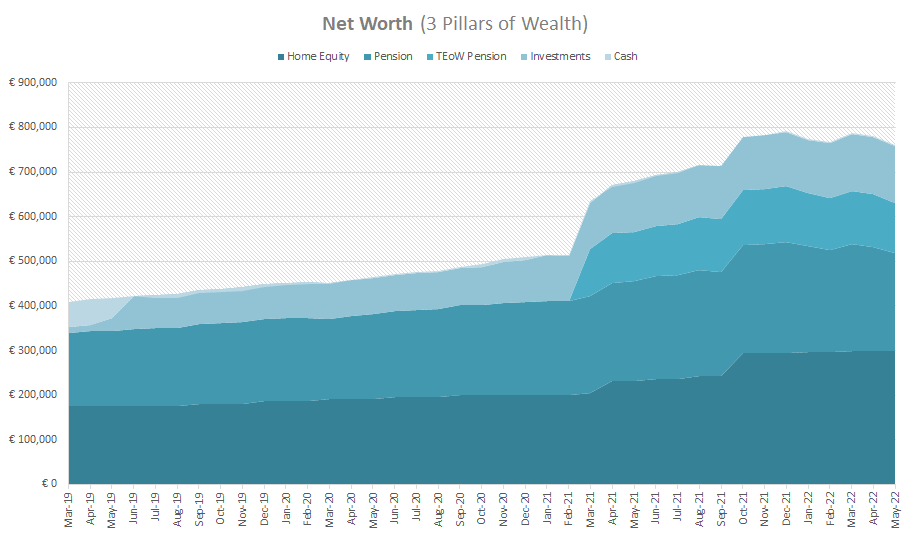 Last month I dreamed about the “red months” to end. So far there does not appear to be an end in sight! 😮

Our pensions are now back in April 2021 territory. Ouch. I’m not a religious man but I have to admit, I have been considering picking up “praying” as an investment tool as of late! HAHA 😛

Anyway, we hope for next month to look a little better. (Spoiler alert: it’s not…)

I had to write off my LUNA crypto entirely in May. I have received “Luna classic” tokens instead, but they are pretty close to worthless, so I won’t count them on next months balance sheet 😛

We received some good news from “The Many” and we’re expecting a payout of our invested funds in June (together with a 6.43% return). All in all the experience with The Many has been fairly positive in terms of return, but I’m left with a bit of a dry feeling in my mouth. I was really hoping for them to succeed, but in the end the FSA would not allow them to continue with their current business model (who many smaller investors found attractive). Their new model with closed funds (12-year projects) is of no interest to me, and I honestly do not expect it to take off – but of course I could be misjudging the other investors here.

Finally we had a little vacation time that we spent looking at possible vacation homes (for future rental income) on the amazing island of Bornholm. Nothing is set in stone yet here though. I have my doubts whether RIGHT now is the right time for vacation properties (or any property purchases really). It seems the interest hikes has yet to really affect the listing prices – but I believe they will during the next couple of years. So maybe it’s best to sit on the sidelines for another year or so, and see what happens on the housing market? What do you guys think? 😉

Passive income was average and unfortunately savings was below average due to some vacation related expenses and I’ve started saving for a new pair of glasses (I’m blind as a bat – so they are not cheap…).

That’s it for this months update!

Thanks for reading – and see you next month!