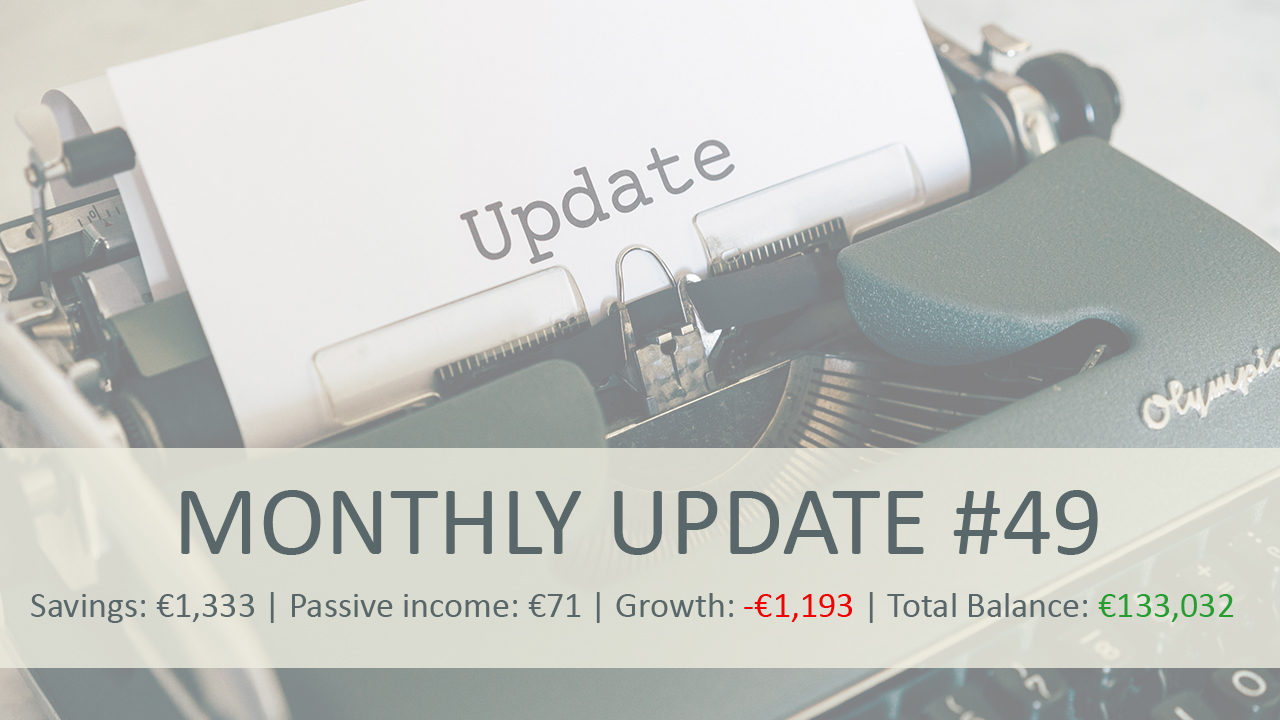 Here we are again, and this is getting a little old by now, isn’t it!?

Let’s just get it over with, shall we?

This is number 6 red month out of 9 so far. I can’t remember ever having experienced this before, and unfortunately I don’t believe that it’s over quite yet (far from it, actually…).

But in times like these (bear markets) it’s important to remember that these downturns are part of the game, and EVENTUALLY it’s going to bounce back up. It might take longer than last time though (remember the Covid-crash?!), but eventually we’re going to be reporting consecutive green months once again! 🙂

There are many different models to predict “where are we?” and “where is the market going next?” but the one that I find the most “accurate” is the so-called “Buffet Indicator” (the relationship between GDP and the Market Value).  Based on these two values, you can calculate whether the market is over- or under-valued (according to Warren Buffet – who’s renowned as one of the best investors of our time). We’ve been in over-valued turf for quite some time now, and the Covid-crash only shortly brought the market back into “fair value” – according to the Buffet Indicator. In October we once again reached levels that the Buffet Indicator deem as “Fairly valued”. However, we’re still way above the historical trend line:

I know – it sucks, but those are the facts.

Now, someone could/would/should argue that the Buffet Indicator only measures the US market. If we broaden the horizon a bit, and use the same formula to calculate the Buffet Indicator for the World, it actually looks a tad better! If we use GDP data from the worlds 25 biggest economies, the ratio of Market Value to GDP is currently ~119% (see Buffett Indicator: Global Stock Market Valuations and Forecasts (gurufocus.com).

Unfortunately, history cannot tell us much about the future 😉 We can only assume that the long-term trend of the market is eventually going to mimic the past trend. But like so many things in life, there are no guarantees…

However, if we just look at China (the 2nd largest economy in the World), their current Buffet Indicator is at 53%! Oh my! But China is irrelevant, right?

Through history, China has been a major player up until the 1800s, where the US took over – but what’s the current situation in The Changing World Order?

Anyway, I continue to hoard cash like never before, and while I’m not proud to admit it, I kind of panic-sold one of my ETFs in September…I felt like I needed to limit my exposure to this shit-show that is Mr. Market atm, so I took home a 20% profit in iShares MSCI World Minimum Volatility UCITS ETF (IQQ0) and sold the lot!

Now, I of course know very well that you’re not supposed to try and time the market! Which is why I do not plan to buy it back (haha!?). I hold my ETFs in a special account-type (danish: Aktiesparekonto), which has a lower tax bracket than our regular brokerage accounts (17%), but you pay the tax each year on any gains you’ve had compared to the year before. I dislike this taxation system, and also there is a cap on how much you can put into the account, and I’ve already reached that limit, so I cannot add any more cash to this account. This annoys me a great deal, as this force me to have different index strategies based on the account type. I never thought I would say this, but I want my investment accounts to be more simple 😛 (yes, you heard it here first, kids!)

I only have one regret: That I didn’t sell the others as well! HAHA

Anyway, for this same reason I’ve also moved the last bit of my EUR(x) that I had with Nexo, so now I only have a bit of Crypto left here.

There is continued radio silence from Celsius, so no news there on what’s going to happen to our frozen crypto in this account (they’re probably gone by now).

On a personal note, we’ve taken the first step towards a major remodel of our home (planning to add a 2nd bathroom to the house and upgrade the kitchen); we’ve bought new tiles for the floor…Next step: demolition! Since this will involve tiling, plumbing and carpenting (hmm) this will be a major cost driver for the coming year…This COULD mean that I’m going to have to pause my Total Balance contributions for some time. Originally I was planning to borrow in our equity, but since the interest rate is now 5x what it was when I made that plan, I’m not sure I’m willing to take that route. For now the tiles are just a tiny first step though (they were on sale, and this particular tile is no longer manufactured), so we’re not completely sure when we’re going to actually start the project! (we know, we’re silly that way 😛 ). All of this of course has nothing to do with FIRE, really. In fact it’s the complete opposite. Do we need new tiles? Maybe not. Do we need a new kitchen? No, not really. Do I need an extra bathroom/toilet in the house?….Yes. Yes I do! 😛

I’m optimistic that whatever we choose to build “onto” the house will come back in added value eventually…Which brings me to a small update on another project that I’ve been working on; Solar panels!

Since the energy prices went amok, I’ve been investigating adding solar panels to our outhouse (our main house has a thatched roof, so no solar panels allowed here). During my research I’ve stumbled across something very interesting; The latest and greatest in the “green energy tech world” is something called PV-T (Photovoltaic and Thermal). What is this mumbo-jumbo, Nick?!

Well, since our primary heat source is natural gas, I’ve also been looking at possible replacements for our gas furnace. The most popular alternatives are air-to-water heat pumps, or water-to-water heat pumps, using the ground as heat storage (this is a real thing, but it requires huge amount of hoses to be dug into the ground in your garden/lot). Heat pumps use electricity, so coupling this with solar panels makes sense. However, with PVT you combine a solar panel with a thermal panel (there is a heat exchanger on the back of the panel). This is quite brilliant, as PV panels becomes LESS efficient the warmer they get. So by adding the heat exchanger to the back of the solar panel, you not only get a more efficient solar panel (10-15% more efficient) you also get a FREE heating source for your house. The heat exchanger contains a liquid that transports the heat from the panels into a heat pump (same technology that are used in the ground source heat pumps) and from there into your house. Depending on how many panels you can fit on your roof, this system can provide both heating AND hot water for your home.

Needless to say, I was quite enthusiastic about this technology when I first discovered it! – Until I saw the price! As per usual, all new technology are typically more expensive – until it becomes mainstream. Unfortunately PVT has a little way to go, until it can be considered mainstream. We’re therefore still undecided whether we’re going to go for the classic solar panels, or the PVT solution.

I’ve so far found Dutch, French and Danish versions of the PVT solutions. I have preliminary pricing on the Dutch and the French solution and am still awaiting some pricing details on the Danish solution. If you’re curious about how it works, have a look here.

I just noticed that the growth this month was the EXACT same number as the one last month!? What are the odds of that!? TOO bad they’re both NEGATIVE! 🙁

As always, I include the Classic Growth Charts for tracking purpose. 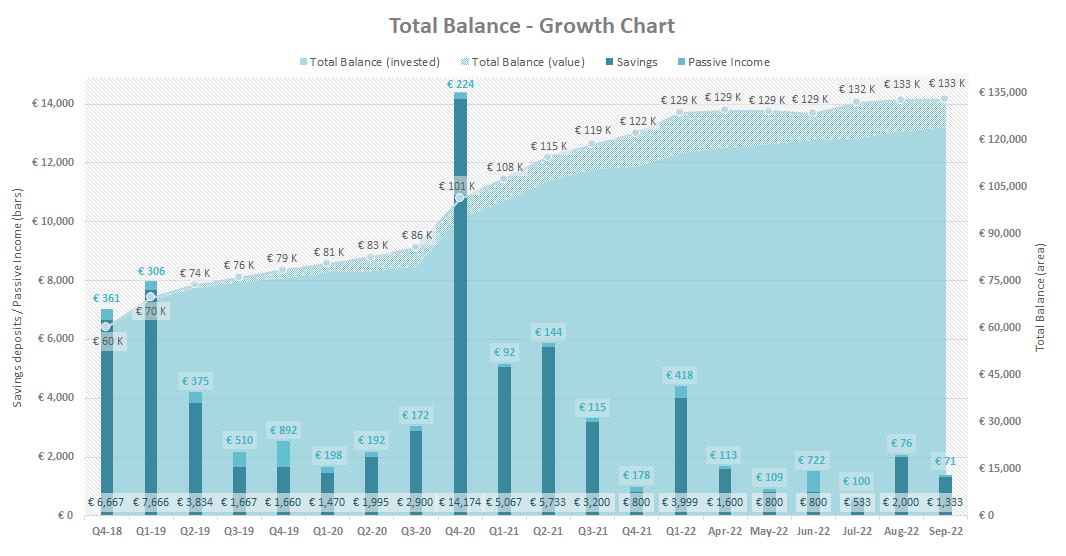 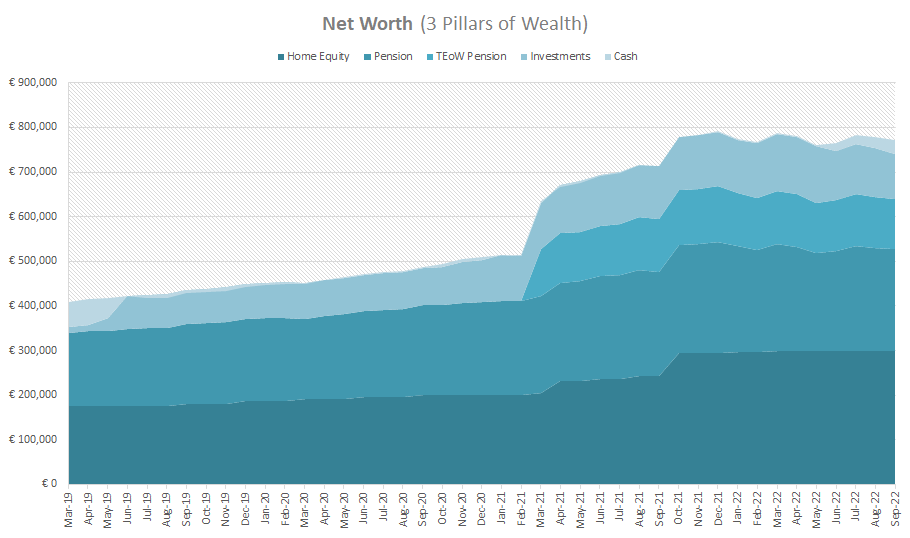 VERY, VERY slow progress this year! But progress, none the less (Total Balance wise – Net worth, not so much!) 😉

I took home a 20% profit in iShares MSCI World Minimum Volatility UCITS ETF (IQQ0) and sold all my shares, because I’m a scary-cat who prefers cash over equities atm…

I’m spending a lot of time trying to find a perfect solution for our house to become 80% self-sustainable with energy…So far I still have hopes that it will be possible, but it’s definitely not going to come cheap! I hope an investment like this is eventually going to come back in terms of added value – in case we were to ever sell our house (spoler alert: We’re going to sell it – eventually).

We’ve also taken the first steps towards a major remodel of our home (adding an extra bathroom) – so far we have bought the tiles HAHA! Next phase will be to plan the demolition (also replacing the kitchen while we’re at it). Oh my, 2023 is going to be an expensive year!

I’ve continued to move funds out of Nexo and into my main savings account (it just seems safer to save them in there atm). I’ve noticed that Norwegian and Santander have started to offer positive interest rates again! (0.8% – WOW!!!….). So might move some funds there for “safe keeping”.

Sorry for another late update! This is becoming a really bad habit – will see if I can do better on the next one 😉