Greetings and salutations, dear readers. It’s time for another monthly update (already!). Time is fun, when you’re having flies, as Kermit would say 😛

It’s been an eventful month in the Total Balance household! We spent some of our hard earned cash on some new (old) furniture, and I put some of my stash to work as well. There were no major breakthroughs or massive investments made however (still waiting on that big whale to beach!), so all in all the month of March did not deliver any major surprises. BUT WAIT! – Another massive deposit to my stash was made! Surprised?

First of all, if you’re a regular reader (hello, and thank you!) you might have noticed that the update format has changed to a “wide screen” version. If you’re a new reader (hello, welcome – thanks for stopping by!), you most likely won’t notice (or care) much about the width (pun intended) of this post.

Anyway, it’s never too late to broaden your horizon (get it?! I thought that was really clever…), so without further ado, I present to you the NEW and IMPROVED balance sheet/income statement (March 2019):

I’ve added two new platforms to the roster this month (ReInvest24 and Viventor). Some of you might remember that I actually already tried Viventor before, and decided to exit the platform, because of a big amount of cash drag. It seems there are now a lot more active loans on the primary market, and because it’s a P2P platform that offers both buyback guarantee (not all lenders provide this – I only invest in those with buyback though) and have a secondary market, I decided it was worth another shot.

ReInvest24 is another Real Estate P2B platform, which brings my total crowdlending portfolio to 10 platforms. I do not plan to enter any new platforms (I’ve said that before though…), as I’m starting to feel the “sprawl” could potentially become an issue. Maintaining 1 platform is a lot easier than 10 😉

I added PROREIT to the roster as well this month, as I felt it was time to dabble a bit in other “alternative” assets, besides crowdlending. I bought it via an account at SaxoInvestor. I was a bit surprised that it cost me €20 to purchase a REIT to be honest, but the fee will be recovered within two months, by the dividend alone (which is paid out monthly!). I’m not entirely sure if I’m going to continue to buy more REITs (I had planned to buy 3, but stopped after buying the first one because of the high entry fee). I will keep PROREIT for now and see how that pan out, before I invest any further in this asset type.

I’m glad you asked. It’s another one of those weird Danish-specific (I think?) curiosities that happens when you switch jobs. Fellow danes will know the concept of feriekonto/feriepenge (vacation money). It sounds weird, but in Denmark we have 5 weeks of paid vacation from our employer (as standard – I actually have 6). But you have to “earn” those vacation weeks, which you do by working in a company for 1 year (I’m simplifying, bare with me). So when you switch jobs, you haven’t “earned” your vacation with your new employer – so your previous employer pay  you “vacation money” that you can then spend the first year with your new employer (because they deduct you when you take time off within your first year). So what does this mean? This means that this deposit is basically an advance on my savings, because I will not be able to deposit my average €1.000 in the upcoming months where I have some planned vacation (June/July/August typically). So all in all, this will not change much for the year. – But for now, it looks pretty awesome! 😛

Anyway, a profit of €109 from investments this month. While it’s pretty decent, it doesn’t break any records 😉 Ideally I’d like to see a bigger profit next month, as a few fees made a little dent in the profits this month.

And last but not least (I almost forgot!) This week debuts some new eye-candy for you guys! Inspired by the P2P Millionaire, I’ve done a bit of doodling in a new fancy tool called infogram.

Since I recently started taking an interest in my Net worth, I figured I might as well add it as a metric worth tracking. So there’s 3 different “slides”. The first one depicts my crowdlending portfolio, the second one depicts my Total Balance (my FIRE pot) and the last one depicts my Net worth. Take it for a spin! (Protip: You can fullscreen it, if you click the little 3 dots in the upper right corner, and then hit the screen icon). EDIT: Infogram removed due to deprecation (I can only have 10 live infograms, so the oldest ones are going to be replaced by static images). 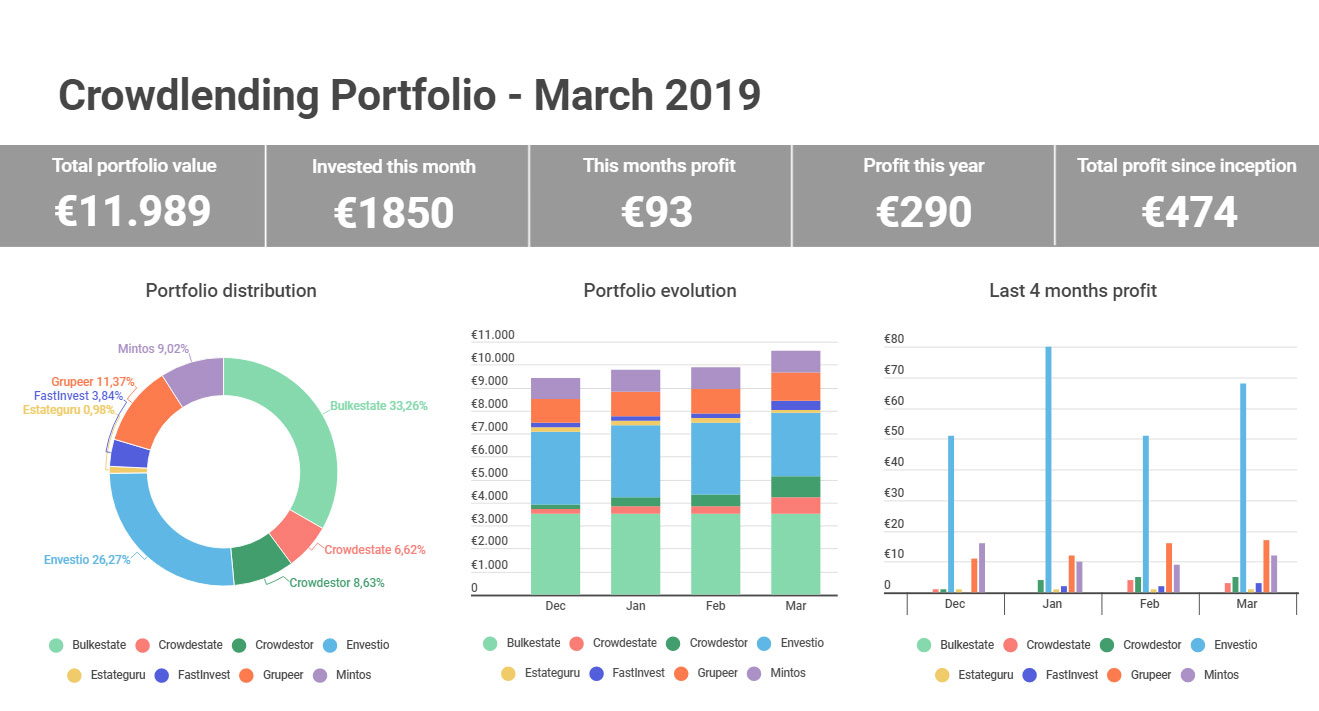 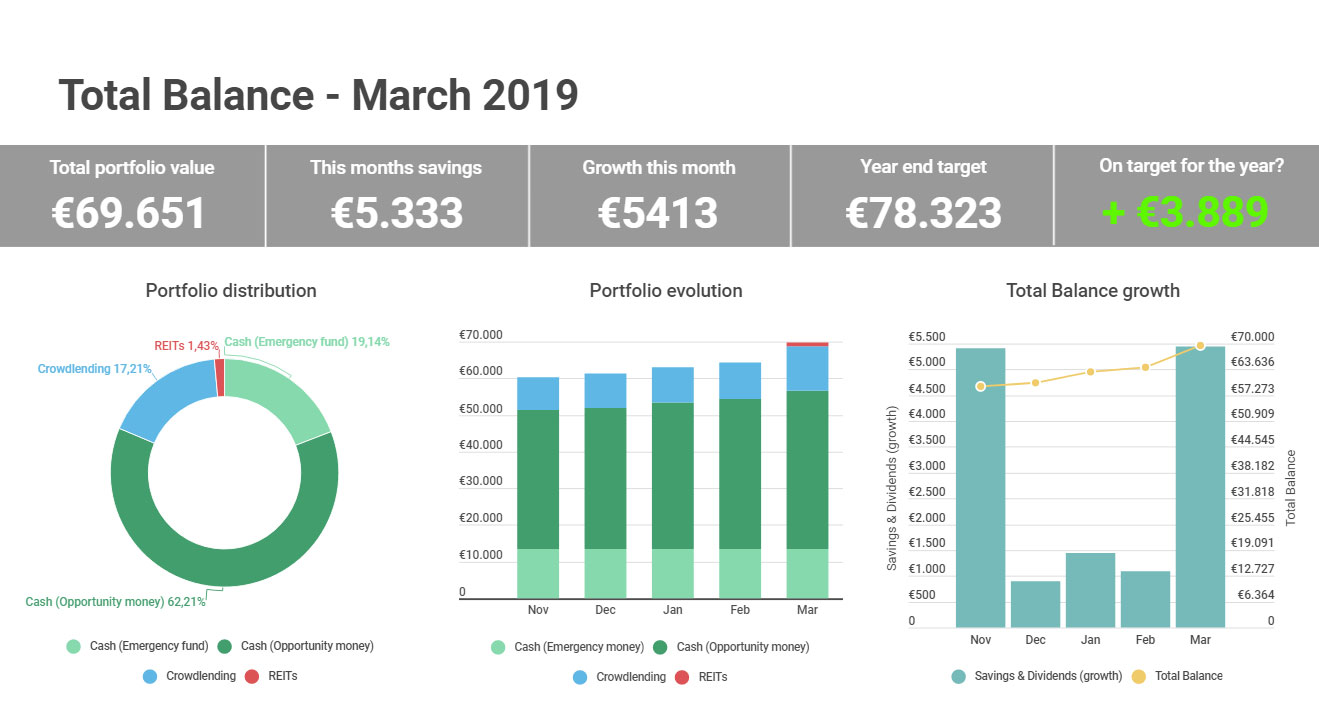 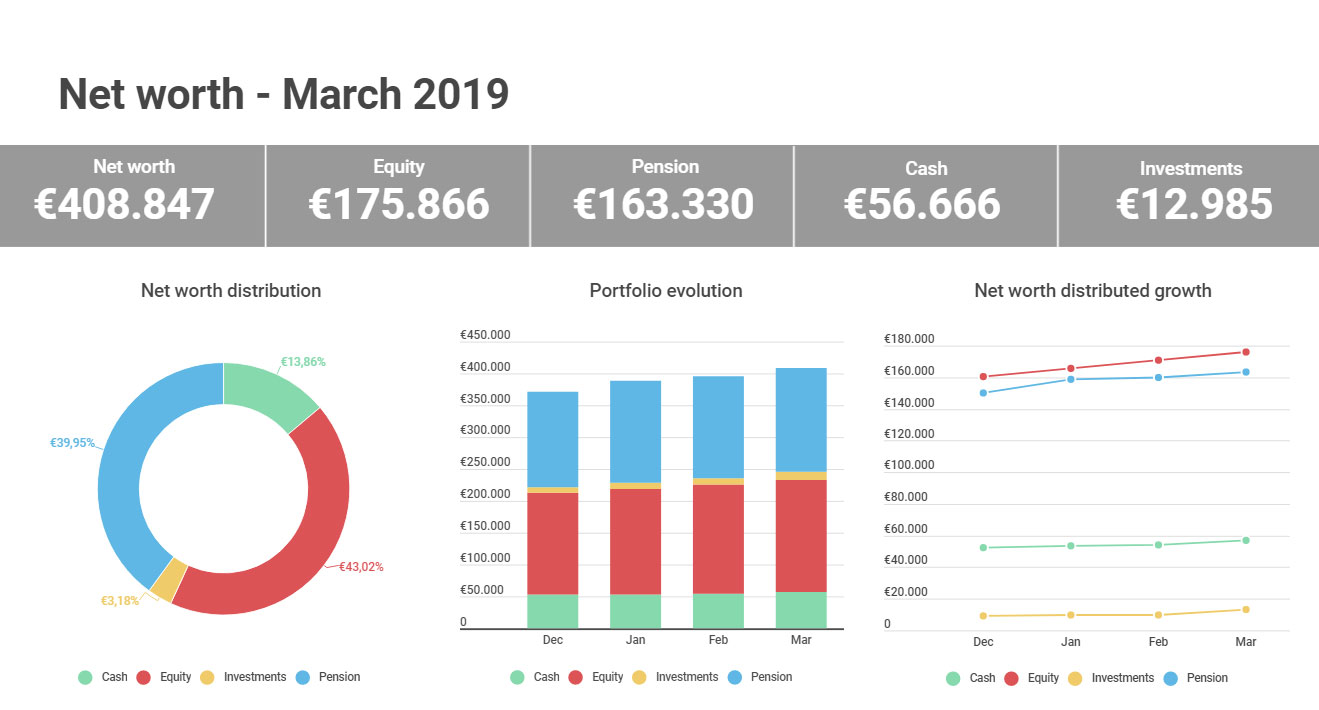 Since this is the free version, there are a few limitations (isn’t there always?), and I will thus still be including my “Classic Chart” of my portfolio growth for future tracking purposes 😉 It pales a little next to the Infogram, but such is life! 😛 (please note that this update is a “special edition”, only to present the Infograms. In the future, you can always see the LIVE INFOGRAM charts on The Portfolio page. Future monthly updates will only contain static images of the infogram – this is for ease of management and future tracking abilities 😉 )

Last month I also started tracking my blog statistics. I’m not quite sure if I want to continue doing this, as it’s unclear whether this is providing any sort of value (both to myself and you, dear readers). But here goes anyway 😉

Again, no records were set this month, and it seems the number of visitors have peaked around 350/month. Not bad. A number that I’m quite proud of, actually! Without any form of active marketing or advertising, I guess it’ll be tough to bring in a bigger crowd. Again, I’m happy with the amount of readers that I have, but I am a competitive person, so I find myself often debating (with myself), whether I should start some active marketing campaigns, to bring in more visitors. But then again, just as more money (probably) won’t make me happier, I don’t think more visitors will either 😉 I’m sticking to my guns! It’s interesting to see the geographic spread of my visitors though! It’s dominated by Denmark, but the 2nd and 3rd place is pretty close between the UK and the USA 😛 I guess it all depends how active I am in the community. I’ve not been that active this month, so I will try to pick up my game in April! Gonna try to find some new friends out there (perhaps in Asia!).

To Tony from OneMillionJourney keep up the good work, my friend! You’re doing great 😉

To The Monk for writing some real original and inspiring content. I particularly like your “Become an investor” series, and your “recession” graphs are real food for thought 😉

To The Saving Ninja for writing about the hard stuff in life! I think it’s important to remind ourselves to live while we can, which can sometimes be difficult when you’re pursuing FIRE.

Last, but not least – to one of the originals, Loui Lam who is embarking on a new adventure soon! Goodspeed my friend!

Thanks for reading! See you next month (hopefully!).

Oh, one last thing: I got a good lead from an old friend on a possible (big!) real estate investment. I’m now hoping to land the big one in April! STAY TUNED! (consider yourself teased!)…

Oh, one more thing: After my post about Brickshare and their new (upcoming) project, they reached out to me and promised that they would release the latest house pricing figures on their website, before the new project would go live. Kudos for reading and reacting! (I intentionally did not link to them, as I didn’t want to draw too much attention – but they found it anyway! 😉 ). This just tells me that they are serious about what they do. I’m hoping for the new project to go live this month! I plan to invest a little chunk, just to get some skin in the game 😉