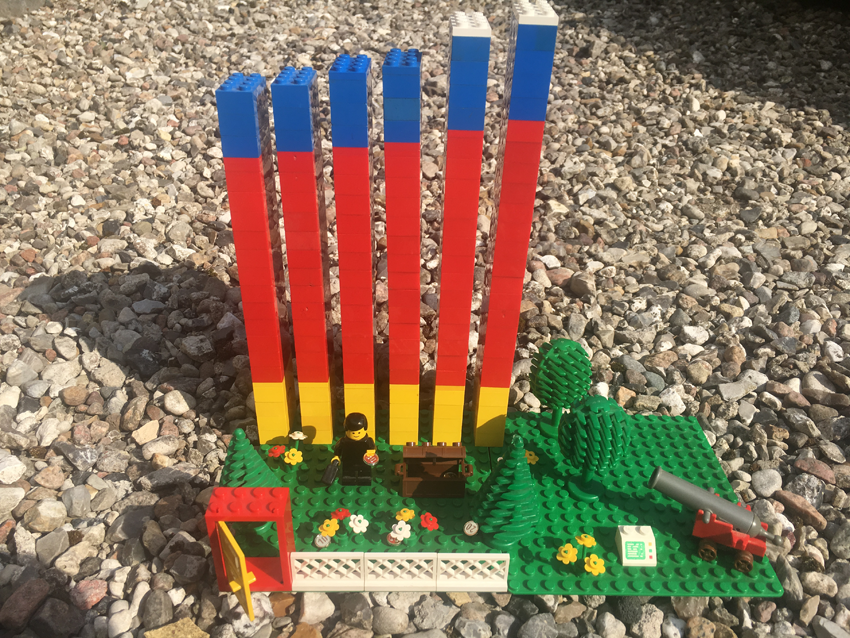 Guess what?! – You guessed it 😉 Another month has gone by, and it’s thus time for the obligatory monthly update that we all love so much (I personally love both writing them and reading them).

As you might have already noticed, this month debuts a whole new character to the Total Balance universe! Inspired by Marc from financeyourfire.com (thanks, Marc!), I decided to build a physical representation of my Total Balance progress (together with my 4 year old of course). Being Danish, I could not think of anything more befitting, than to build it out of: LEGO!

Give a warm welcome to Russel – the new mascot of the Total Balance blog! I’m sure we will do great things together! Be sure to follow his shenanigans every month going forward 😉

Anyway, enough mumbo-jumbo – let’s look at the numbers for April 2019!

(EDIT: Infogram removed due to license restrictions on the free version of Infogram. Only the latest 10 months will be live Inforgrams.) 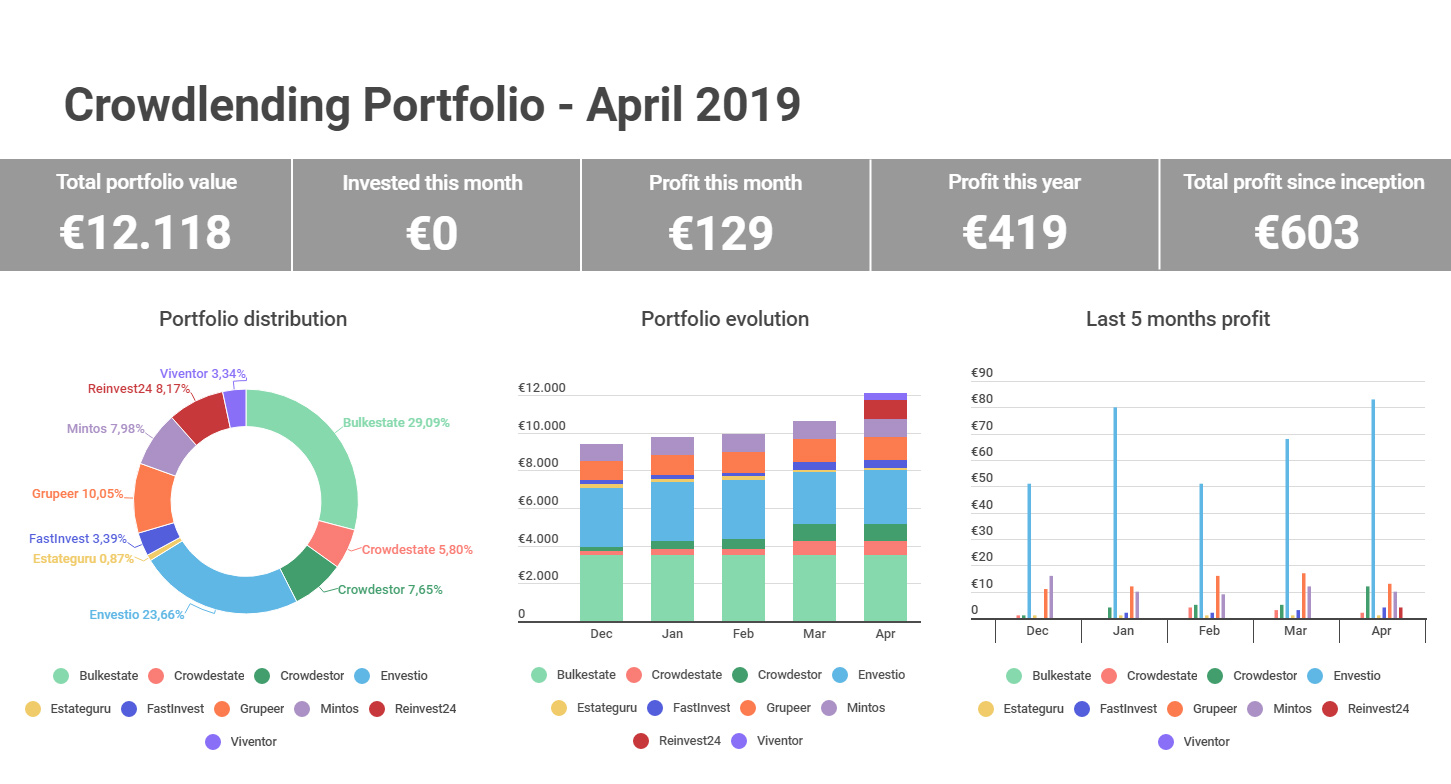 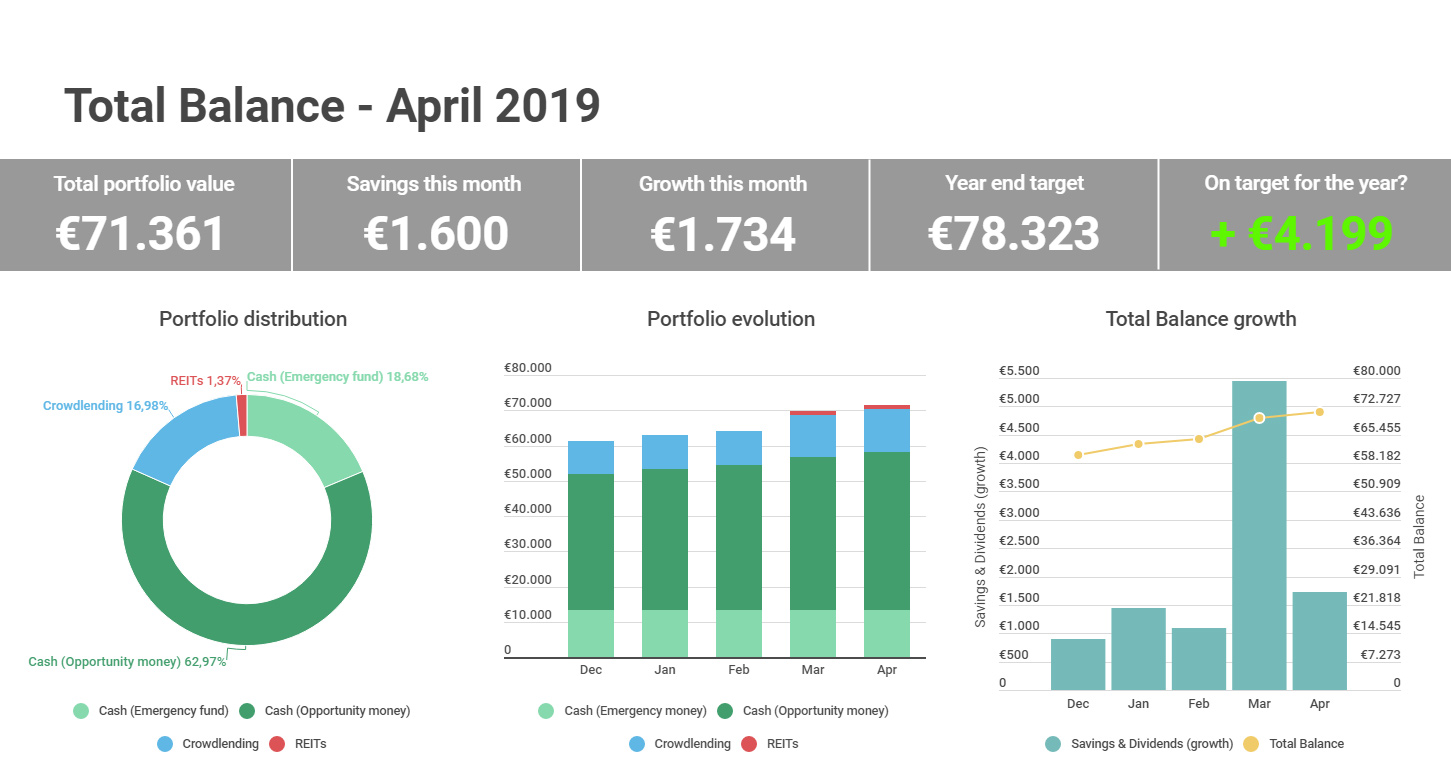 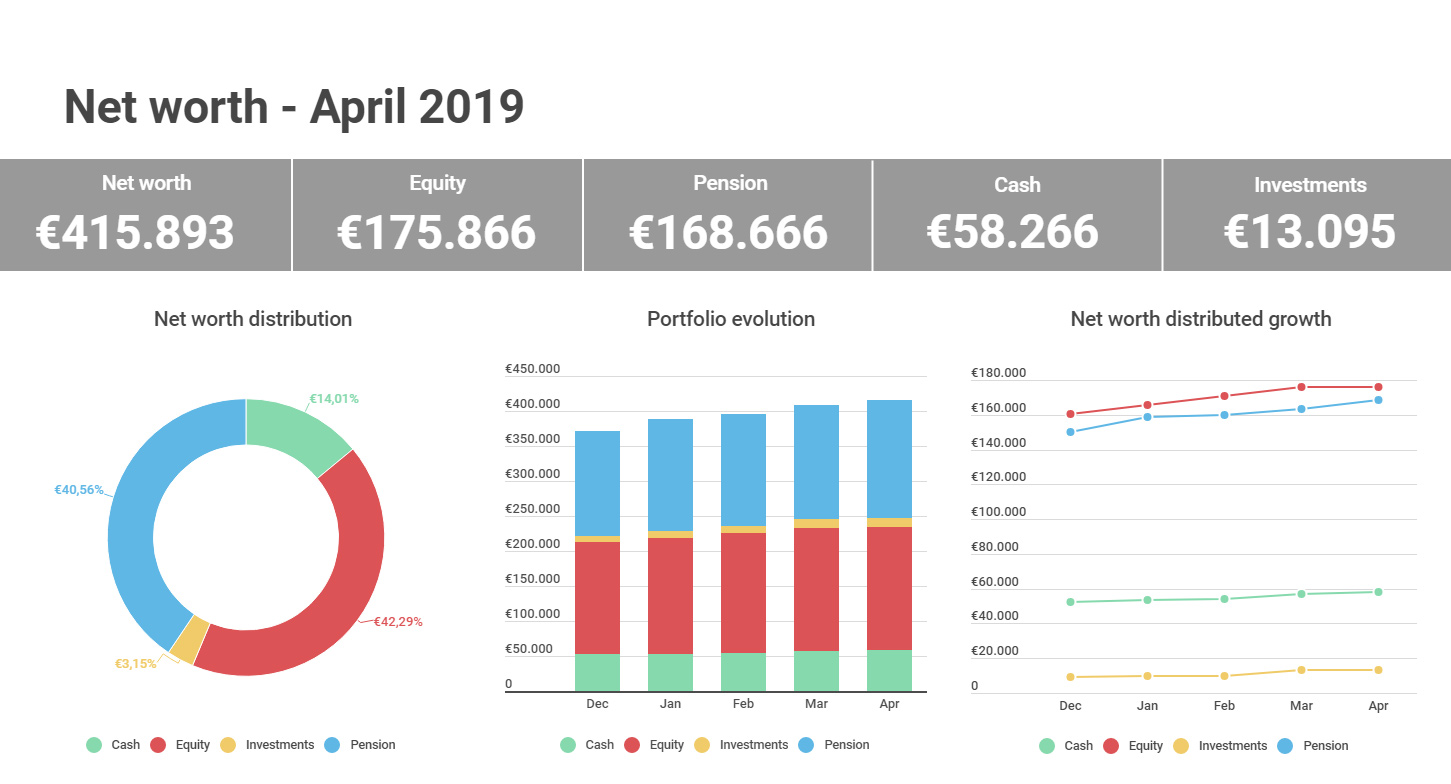 I just noticed that I had forgot to add the two new platforms in the Infogram in the March update, so they have been added now in the April update (even though they technically arrived in March). I know I said future updates wouldn’t contain Live infograms, but I changed my mind (for now). Since I use the free version there’s a limit to how many “projects” I can have, so eventually I will transform the live Infograms to static images (will probably keep 3-6 months live, and anything older will become static images).

I didn’t make any deposits or withdrawals from my crowdlending platforms this month, so nothing major happened here. The returns were thus pretty average (which is a good thing!), and together with a few bonuses I managed to squeeze out a new record return on my crowdlending investments of € 129. I have a few loans maturing at Envestio in May and June, so I’m going to continue “operation diversify” in the coming months. I’d like to see a fairly even spread of around € 1.000 on each platform (maybe I will even add a few new platforms to the roster, who knows?! 😛 ).

I’ve been teasing about Property #1 for a few weeks now, and unfortunately it didn’t make it into the books in April. I’m expecting the deal to close by the end of this week, so I will keep you posted on the progress 😉 I can already reveal that it’s going to make a serious dent in my cash reserves; as in I will have to pretty much empty the bank (and then some), to get Property #1 on the roster. More info coming, as soon as the deal is finalized 😉

Before Property #1 appeared on the horizon, I had pretty much decided to invest a little cash in another REIT, but since I’m gonna have to break the bank to secure Property #1, I decided to hold off on that investment. I did have a little cash on my SaxoInvestor account, so I decided to purchase a single share of Realty Income Corp. Yes, I’m weird, I know. This will allow me to track it closely, and I do plan to buy a few more shares of that particular REIT in the future (I’ll wait for another drop in the price though, which seems to happen occasionally) 😉 It doesn’t pay anywhere near as good as REIT #1, but it’s considered a fairly safe long term investment.

Then there was also the little matter of Brickshare, which I was also planning to invest in. This plan has also fallen victim of the before mentioned Property #1 deal 😉 – So, I didn’t invest with Brickshare this month, but I am still planning to at one point. For now though, I feel that residential real estate (especially in Copenhagen) is very overpriced, so I’m not in a rush to invest in Copenhagen at this point in time. I prefer the “smaller” growth cities, which Brickshare unfortunately doesn’t have any plans to go into (I asked them).

My contribution to my savings this month was a bit above average, which keeps me way above my target for the year. I have planned vacation in June and July, so those months will be expensive (on many levels), so I doubt I will be able to contribute anything significant to my savings in those summer months – so it’s good that I’m 3 months ahead of my target right now! 😛

I’ve been blogging for more than 8 months now, and I have to say it’s quite satisfying to look at the progress that I’ve made so far. My Total Balance has grown more than €18.000 in 8 months, and I’m now almost 18% of the way, towards my level 1 FIRE goal (lean FIRE).

Since I started tracking my Total Net worth that has also grown significantly, this month seeing a growth of more than €7.000. The big leap is mainly due to my Pension having a good month in the stock market. I’ve now changed my Pension portfolio to a more defensive strategy, so I do not expect the same kind of growth going forward. I do however expect a slow but steady growth during the next couple of years. We shall see what happens there, whether I made the right choice or not. I’m currently feeling pretty good about it, but I’ll admit: I will be the first person to whine, if the stock market continues to grow at the same pace, which it’s been going since the beginning of 2019 😉

That’s it for this months update, folks! Hope to see you again next month!

Erhm…No 😛 I’ve been busy, so I haven’t really had the time to read a whole lot of posts this month.
OK OK, maybe just one then!

This post from M @ Radical Fire really made me think about “making good decisions”.
I’m awful at spending a lot of my precious “compute power” (brain power), worrying about stuff that I really have no influence over, so I often cite this mantra to myself: Don’t worry about stuff that doesn’t worry about you. The post also kind of inspired me to write about my relationship with a scale. This is really why we all do this, isn’t it? – To inspire others.
So thank you for that, Radical Fire 😀

Well, now you’ve got me started!
I did read a couple of other posts that really had my wheels spinning. There’s this one from Cheesy Finance, about enjoying your journey, and not regretting the time you’ve spent (wasted) not knowing about the FIRE. If FIRE is your destiny, you will discover it in due time (these are my words, not theirs). I sometimes regret that I didn’t discover the FIRE movement 10 years ago, but then again; I’ve enjoyed my life for those 10 years, so there’s really nothing to regret! 😉 This post also introduced me to a new acronym that I hadn’t seen before: H.O.T (Happy – Opportunity rich – Time rich). I like it! So now we can strive to be HOT and on FIRE! 😛

That then leads me to this post from Miss FF (Fretful Finance) AKA The Sanguine Saver 😛 About being jealous of others (primarily their financials), which I can definitely relate to.
Congrats on finally making that flat purchase, Miss FF! I hope you enjoy it 😉

About the blog statistics: Aprils traffic was very similar to March, so unless something major changes (for better or worse) I’m not going to report about it on a monthly basis 😉

So, that was my monthly update! How did you do this past month?