The crowdlending portfolio continues to drag its feet, and I now have multiple projects on multiple platforms that are late/defaulted. Even on Mintos I have €150 in defaulted loans. At this point I’ll be glad if I can recover 60-70% of my money from this adventure, but for now I’ll just let it play out, and slowly withdraw my money as it’s being repaid from the successful projects. Those projects still exist, and I feel like I kinda have to give TFGCrowd some props. – Not one delayed payment or one defaulted project so far. My last project is scheduled to exit in October, so I will be able to leave the platform with €0 in lost funds (hopefully). I’ve been tempted to re-invest a few times, as they now have projects with interest as high as 24%, and they’ve started doing Invoice Financing, most likely to increase their cash flow. I still don’t trust them, even though I actually do not have a reason not to. Withdrawals (still) happen almost instantaneously like a clockwork (often I receive the funds in my Revolut account within minutes!). Still, I recommend you think long and hard before you consider investing with TFGCrowd. Interest rates on projects at 24% should tell you a thing or two about the risk here…Invest at your own discretion 😉

My Net worth is now slowly creeping towards €500.000. I don’t think I will hit that target this year, but it will be very close. Maybe Q1-2021, if the markets remain relatively stable. My home equity and my pension continue to race neck and neck. I swear I’m not making up these numbers, They are within a €20 margin! It’s uncanny! I was hoping my pension would eventually take off, but due to the relative flat market development the last couple of months, it hasn’t moved much (besides my own monthly contributions, which pretty much equates to my mortgage contributions – again, purely coincidental, but a bit uncanny none the less).

Brickshare announced a rebranding this month, so they’re now called “The Many“. Not sure if I like it, but I see where they are going with it. They are moving into “other areas”, like eg. solar and wind, so BRICKshare might be a bit misleading, so I fully understand the need for a name-change. They’ve also updated the investor dashboard to include more details. All in all a very positive progress. I might consider investing in their new renewable energy projects, and I’m hoping that they will continue to bring interesting real estate projects to the platform, as I like the simplicity.

They’ve also introduced a secondary market function in your dashboard, where you can sell your shares in a project. It comes at a 1% fee, which is actually not bad, because the buyer is The-Many themselves, so you don’t have to wait for somebody to pick it up. You’ll be credited within 30 days.

The new kid on the block is TransAlta Renewables, and it would appear to be a beginning of a new (small) dividend stock portfolio…Not quite sure how that happened (haha), but I’ll be hanging on to it for now – maybe even add some more at one point, who knows?! 😛

I finally managed to add a decent chunk of cash to my savings again, and I’m hoping to continue the trend in the coming months (spoiler alert: October is going to be off the charts 😉 ). 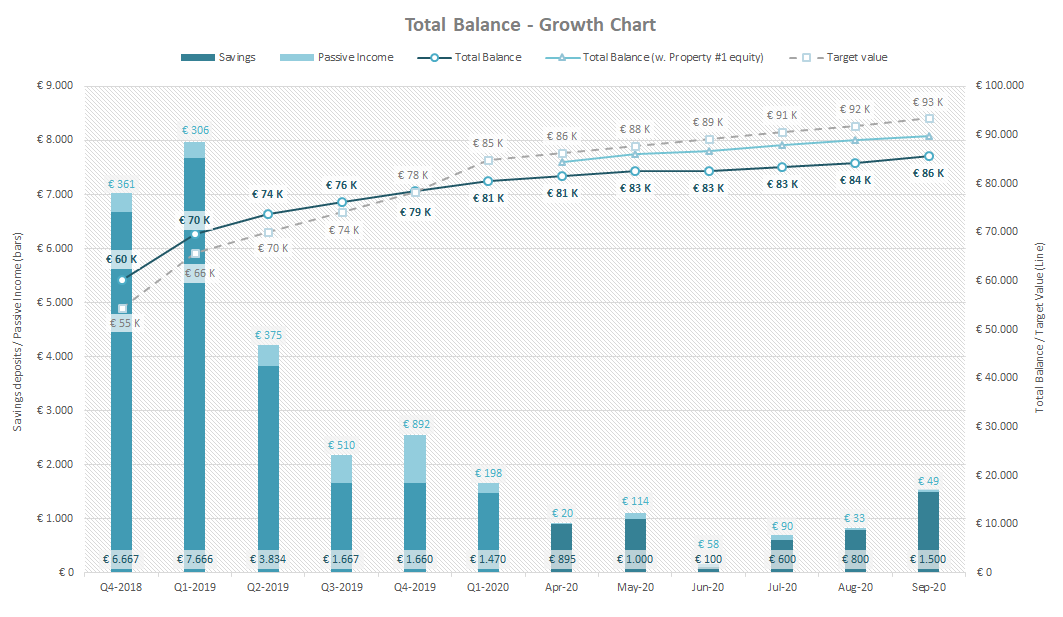 Still currently trailing far behind my target atm, but October is going to be a massive savings month, as our government has decided to payout our frozen “vacation money” from last year, which wasn’t intended to be released until you retire. Due to the Covid-19 situation, the government has decided to release them now, in hopes that people will go out and spend them in our local stores. Well, the joke is on them, because we all know that I’m not going to spend them 😉

A pretty low-key month on the income front, but I managed to squeeze in some decent savings.

I also managed to procure myself a new car (lease for 3 years), which I’m very excited about. It’s cheaper to run than our old car and it feels great to be driving an EV!

I became a Twitter Twat, and I’m still unsure where that is going to take me/the blog. We shall see 😉

I also purchased a new dividend stock in the form of TransAlta Renewables, which I’m quite happy with for now. Perhaps my two dividend stocks constitute the beginning of a whole new era for me. Time will tell! 🙂

My Net worth is slowly approaching the magic halfway mark of €500.000. That’ll be a major milestone to celebrate once that happens (maybe not until Q1 next year though).

To read about my goals (for the year, and onwards) go here.