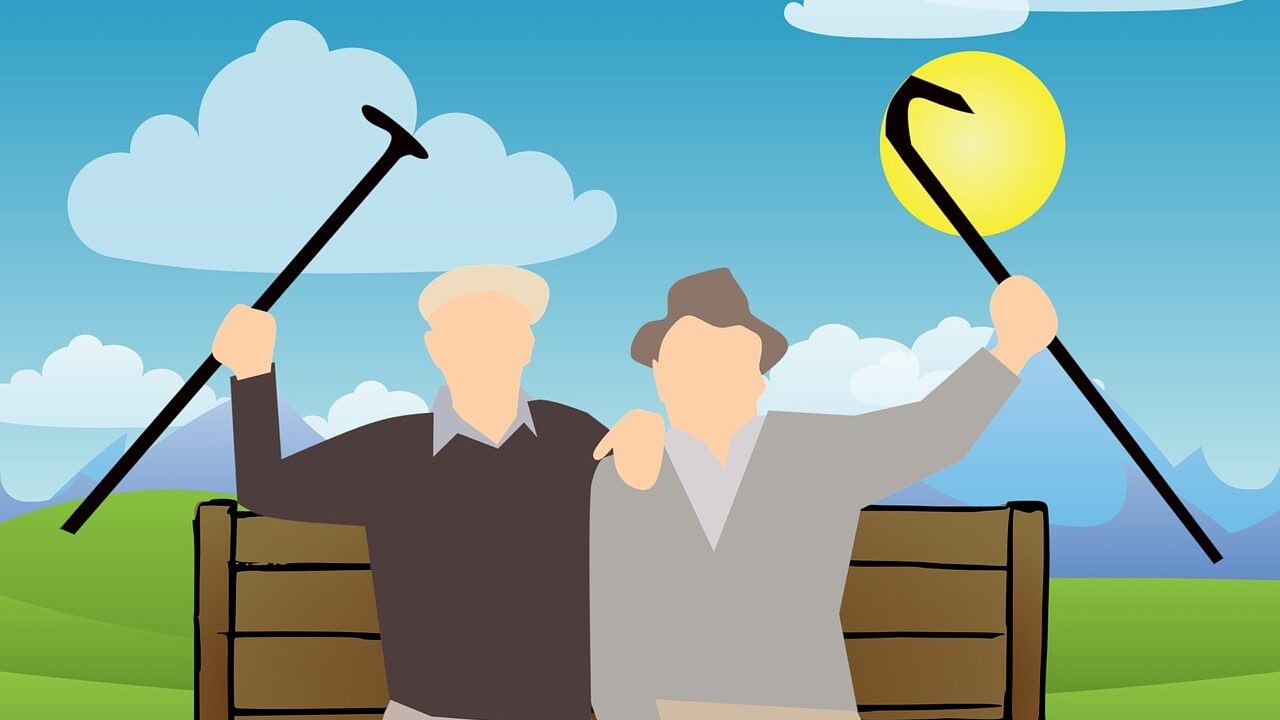 As is the norm when we enter a new year, I like to look back at the returns of my (Pension) portfolio from the previous year(s).

Is it time to change my AA (again)? I was quite conservative with my AA last year when I opted to move a great portion of my portfolio OUT of the stock market. And Boy was I wrong to do that! The stock market hit an all-time high (again), gaining close to 30% in 2019, which ultimately left my portfolio returns in the dust in comparison.

You win some, and you lose some – I’m not regretting my decision to change my AA, but the events of last year has made me reconsider my overall strategy for my Pension portfolio (which is part of my 3 Pillars of Wealth).

I’ve actually said it many times before on this blog, but allow me to repeat myself: Don’t do what I do, kids! 😛

I’m no financial advisor that should be pretty clear by now 😉 So should you choose to follow any of my “advice” on this blog, clearly you’re on your own (and maybe a little out of your mind?).

Still! Allow me to explain the craziness! You see, my young followers, to truly understand my aversion towards the stock market, we must go back in time to when it all began (oh geez, here he goes again – is there any way we can get the SHORT version this time?!). Long story, coming up!

In 2007 I got my first “real job”. By real job, I mean a full-time job that I had earned via my merits from the many years I spent on the school bench. I had jobs prior to this one – even full-time jobs – but this was a special job, in that it came with a company provided pension scheme. And thus, I had now truly become a real adult (yeah, right).

Young as I was, I knew little about investing, and as far as I can remember, I didn’t really care that much about it either. I suppose this is pretty common for young people – retirement seems like a lifetime away (it is!).

Then came the year 2008. We all know what happened that year. The financial crisis hit the world like Thors hammer, and many people lost their jobs, their homes and a big chunk of their pensions as a result. The MSCI World index declined more than 40% in 2008.

As you recall, I didn’t care much about investing back then, and thus paid very little attention to my pension at all. In early 2009 I remember speaking to a couple of older co-workers, who was pretty devastated by the development in their pension portfolios. They were not on the brink of retirement, so they had faith that it would eventually recover, given enough time. It would take them almost 6 years to recover what was lost. The rest is history, as they say.

I think we’ve reached a point in this story, where it’s time for some charts! – Just to provide a little perspective, this is the returns of the MSCI World Index during the years 2007-2019:

I was actually a little surprised when I saw this chart. I distinctly remember it, as if the downturn lasted for several years. In fact, it was all lost in 2008 (and then a little bump again in 2011), but the next handful of years following the 2008 crash was actually pretty decent, in terms of returns (maybe it was the Mandela Effect!?).

Anyway, if we look at how the Index developed in the years after the financial crisis, it becomes clear that it actually took almost 6 years to breach the (then) all-time high which was set in September 2007, and thus recover from the great loss of 2008. It  didn’t happen until July 2013 (approx. 6 years after the peak in 2007):

The bar-chart above shows double-digit returns in the years after 2008. – But because of the exponential nature of the Loss:Recover ratio, recovering from a 40% loss actually requires a subsequent gain of 67% in order to regain what was lost. Yes, 67%!

I am sure. Just ask the Internet (it knows everything!) 😉

In the case of our pensions, there are extenuating circumstances though, as continuing to make deposits to your portfolio, will ultimately speed up the recovery in a bull market, because of the effects of compounding. So “Stay calm and keep depositing” should clearly be a mantra, when the shit hits the fan.

But how much does compounding actually help us, when recovering from a loss? Let’s have a look at a model portfolio of 100K during the years 2007-2019: 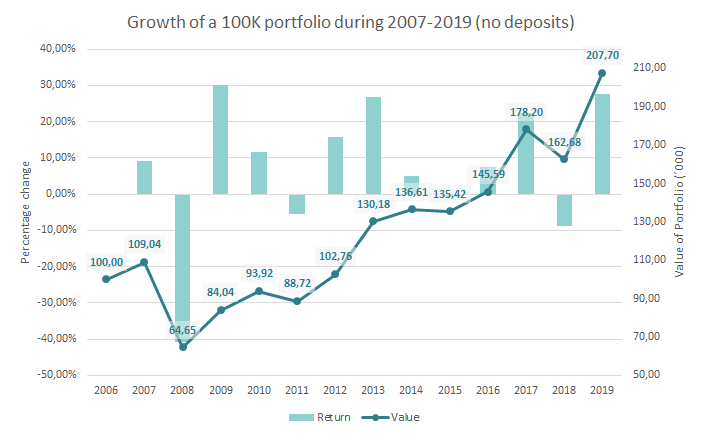 Like the example with my co-workers that I mentioned earlier, this model shows that it would take just shy of 6 years to recover a 100K portfolio from the 2008 crash – but this is an example, where we don’t make any contributions to the portfolio in the years leading up to – and after – the crash. In the case of my co-workers Pension, it’s (highly) likely that they would have simply continued to deposit the same amount of money to their Pension portfolio, as they had the previous years (at least that’s typically how employer-provided pension schemes work).

So let’s imagine that we add 10K to the portfolio, every year during this interval. The picture changes dramatically: 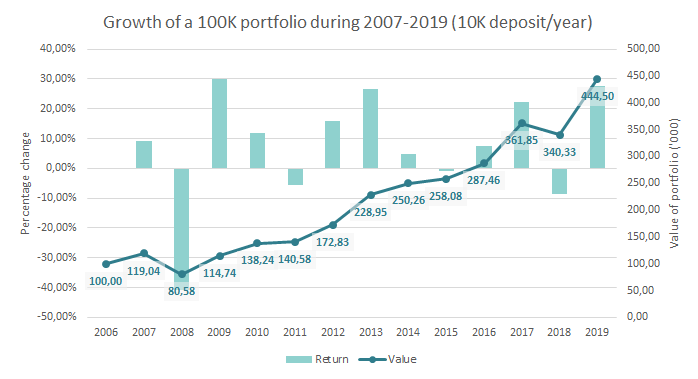 In this example, it now takes less than 5 years to recover from the loss in 2008 (remember to subtract the yearly contributions to match the value from 2007). We’re thus “back on track” 1 year quicker than before. While it does take a 67% gain to recover from a 40% loss, you can speed up the recovery, simply by continuing to contribute funds to the portfolio. All because of the magic effect of compounding!

Of course, the bigger the portfolio, the harder it will become to speed up the recovery (it will require larger and larger deposits).

None the less, I was actually surprised just how powerful the compounding effect really was, so I started to model my own Pension portfolio, to discover how it actually managed during those years (this is actually the first time I tried to look back, and create a complete picture of how my pension developed during its infancy, and the years after the financial crisis).

This is how my Pension portfolio developed during those years:

Now keep in mind that I’ve never been a huge risk-taker with my Pension. In fact, I managed to dodge the 2008 crash completely – not because I was smart, but because I wasn’t paying any attention to my Pension back then. My portfolio was not invested at all – it was parked in a “market interest” product with a yield of around 3-4%. Remember this was the time before those 0% interest rates became the norm 😉

I didn’t begin investing my Pension until around 2010-2011. And at that time, it was parked in an expensive actively managed product, with a low-medium risk (eg. not yielding a whole lot, and costing me a shit ton in fees!). Notice that the year 2009 had no deposits (I got a new job in late 2008 that didn’t come with a pension scheme). This was the year that had close to 30% returns, if you remember correctly! BUGGER!

Luckily, I returned to my old job in 2010 and started contributing considerably to my Pension again. Every time you see a major change (up or down) in my contributions (the dark bars), is because I switched employer. So I started taking an interest in investing my pension just as the market took a dip. Typical 😉

The average yield (based on the MSCI World Index) in 2007-2019 was 7,69%. Keep in mind that this is pre-tax. We pay 15,3% in tax on our gains when you invest via a Pension fund in Denmark. The chart above that depict my Pension growth is depicted AFTER tax. I managed an average return of just over 4% (after tax and fees) on my Pension portfolio in the years 2007-2019. It’s not bad, actually. It’s not awesome either, but it’s not bad, I think 🙂

Keep in mind that I started from 0 in 2007. So even if I had been invested in 2008 and lost 40% of my portfolio, it would have had very little impact, because I was at the beginning of my accumulation. Thus the value of my portfolio was very small (compared to today).

So, now is when you have to ask yourself one question: Do I feel lucky?

I’ve asked myself this question many times (recently). To tell you the truth, I’ve always felt lucky (even despite not getting on the train in 2009 😛 )! I felt pretty lucky to dodge that 2008 crash completely, but it also meant that I forfeited the gains of 2009 (and the years to come). So, maybe I wasn’t lucky after all?

Knowing what I know now, would I have done anything differently? Perhaps – perhaps not. Ultimately, I need to decide on a strategy for the next decade (give or take).

As illogical as it is, I know myself well enough to realize that should an event similar to what happened in 2008 occur again (say in 1-2 years time), I will flee from the stock market, like a dog owner flees from his dog who has just taken a giant dump on the sidewalk. EVEN knowing what I know now! (I know, I’m a dork).

My goal for the next decade is thus not to try to achieve those 12% returns (because I know this will require me to ride the roller coaster – and I don’t like roller coasters). It’s simply to try to improve on those 4% 😉

Because I’m not starting from 0 now – I’ve actually managed to accumulate a sizeable nestegg, I don’t feel like going “all in”, as I still believe we’re currently closer to a/the top than the bottom of this cycle 😉

Is he finally gonna come to the point of this post!?

AND thus, dear readers: We finally come to the conclusion of this long rant. I give to you, my Pension AA for 2020: 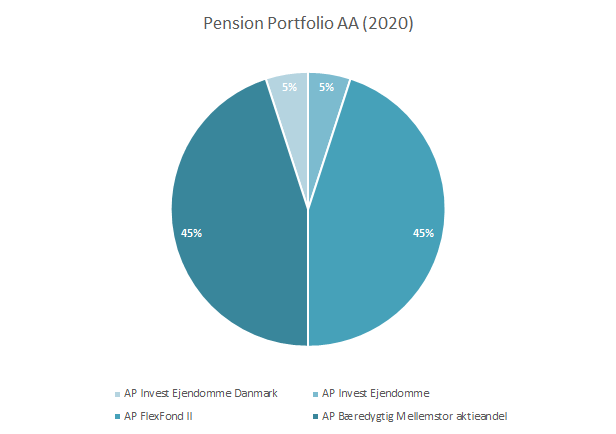 I apologize to my foreign readers for the “foul language” of this chart 😉 Let me break it down to something a little more tangible:

So, 10% Properties, 45% Flexfond (fixed interest/cash reserve returning 2,0%) and an actively managed Sustainability fund containing about 50% stocks, 25% bonds and 25% equities. The AA has a combined APR of 0,89% – not ideal, but not crazy high either.

The idea of this allocation is to have a large “cash reserve” that can be mobilized in the event of a(nother) market crash. Let’s imagine that the market crashes (again) like it did in 2008. Yes, dad – I know you’re not supposed to attempt to try and time the market, but I just can’t help myself! 😛 (this is one of the reasons – one of many – why you shouldn’t be doing what I’m doing). In the event of such a crash, I would re-allocate those 45% towards a broad world index (unfortunately we don’t have access to the MSCI index with my current Pension provider, but they have some DK ones that are similar). And hopefully THIS time manage to ride the tsunami wave after the crash that I missed in 2009 😛 We shall see how that goes…

In the end, whatever AA you choose, the important thing is that you’re able to sleep well at night.

For tracking purposes (and because I already made it, and because I like to look at it) I will leave you with one last chart:

2019 was the first year in the history of my Pension portfolio that my return out-performed my deposits (after tax, even). That’s the power of compounding for you! Now, lets hope 2020 can repeat that success. I have my doubts, but I remain optimistic for the future of my Pension fund anyway 😉

What do you think? Another mad move from yours truly? 😉

Hit me up in the comments below (and maybe share your own AA for the coming years)!