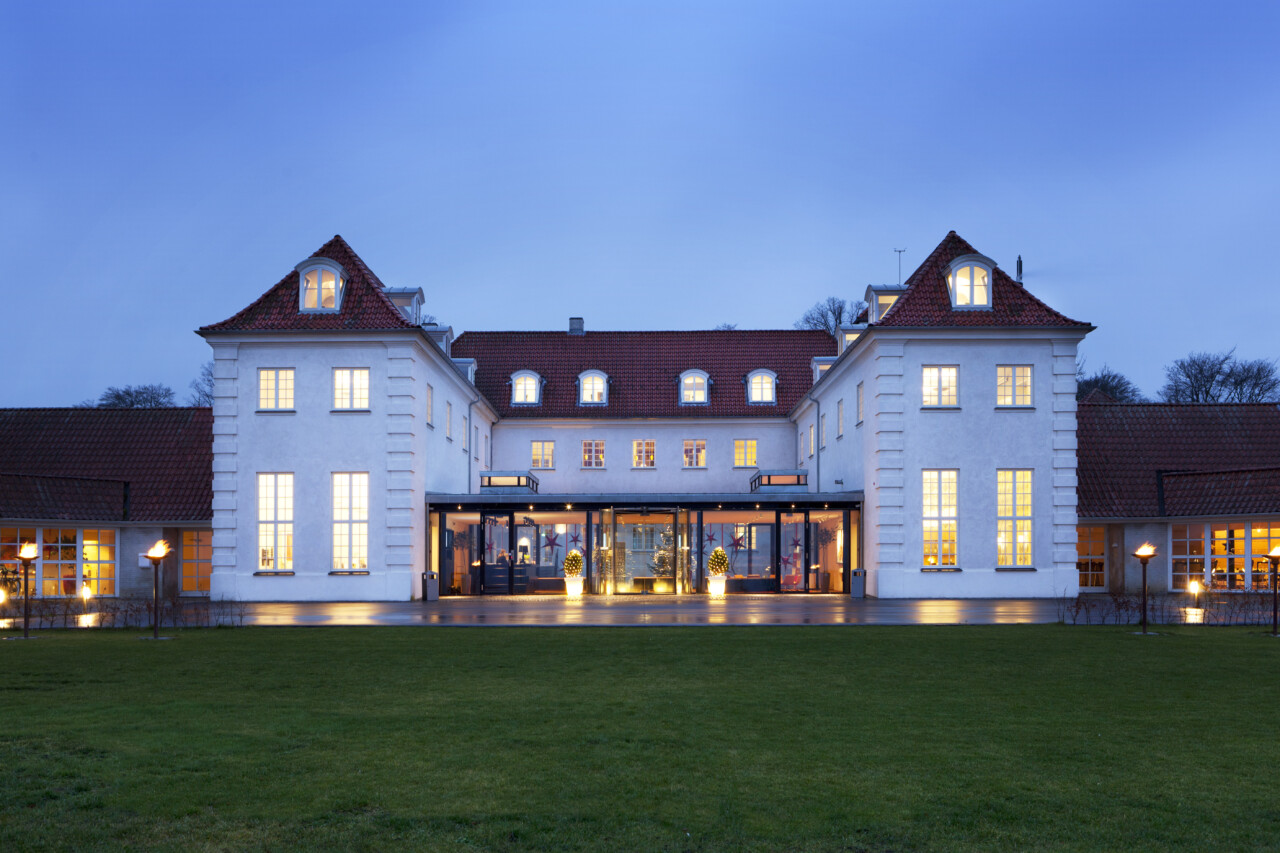 As promised, I spent another evening out, learning about real estate investment opportunities – this time, with the company Koncenton.

This event was a little special though, in that I got to bring the wife…

I had arranged for a baby-sitter (the grannies)! Needless to say, TEoW was not really that thrilled, about spending a night out with “budget geeks”, and “sleek salesmen types”. However, having endured more than 2 hours of powerpoint slides, I looked anxiously over at her – and to my big surprise, she seemed like she was entertained. As a frugalist, a FREE night of “entertainment” AND food AND wine is almost too good to be true. This could develop into a monthly thing for us!

Anywho, this event was about 4 times bigger than the Imbro event. 40-50 people were there, and it was a very mixed crowd, although I would say there was an overweight of middle-aged people. I recognized a few of the attendees from the Imbro night, so I wasn’t the only one “shopping” for new opportunies 😉

The Chief of Investments of Koncenton (John) presented the team and their take on the real estate investment landscape as a whole, before diving deeper into specific Koncenton projects. Koncenton is a much bigger shop than Imbro, so their projects are much larger – and unfortunately the minimum buy-in on their projects is 750.000 DKK. So that concludes this review!

John and the other guys from Koncenton all seemed like nice and trustworthy people. They didn’t strike me as slick salesmen types, as TEoW had feared. Most of them have a long background in the financial industry. Koncenton was founded in 2015 (so a bit older than Imbro). However, much like Imbro, Koncenton has a sister company (called Obton), which has existed since 2009. They sell renewable energy projects to investors (much like Imbros sister company). So the guys behind Koncenton are seasoned people indeed, and they have a lot of other people to fill all sorts of support functions (they are around 50 employees in total).

Because Koncenton deal in much larger projects than Imbro, they actually have status as a Trustee and is registered as a FAIF (Forvaltere af Alternative InvesteringsFonde). This actually means that their prospects are audited/approved by the Danish SEC (Finanstilsynet). This is the big leagues. – Hence the minimum buy-in of 750.000 DKK.

John makes quite a big deal out of emphasizing that they believe that real estate should be a part of any investors portfolio – as long as they have assets in excess of €500.000 (3.750.000 DKK), which mean that they recommend real estate should account for about 25% of a balanced portfolio. It’s of course up to the individual investor, whether he wants real estate to be 80% of his portfolio – but they actually don’t recommend it. This is obviously interesting (since I plan to be heavily invested in real estate short term), but it also says something about their sales tactics. They are not trying to push real estate on people, as the only proper asset in your portfolio. This was one of my favorite slides (headline: It has become increasingly difficult to be an investor):

He also emphasize that the obvious downside to real estate investments, is that your assets are very illiquid. Each project is estimated to run for at least 5-10 years. They do facilitate selling individual investor shares, if you want out of a project before the structured exit – but you pay a premium for their service! – 5% actually, so it’s not cheap getting your money out ahead of time.

Why is real estate investment a good idea? (John asks). Well, this slide kind of says it all:

You’ll remember that these kind of investments is NOT speculating in the equity increase – it’s merely an investment in the cash flow operations on the building(s). The avg. yield of just shy of 10% that Koncentons projects are typically budgetted at, is calculated based on a 0% increase in the building equity. Even dividends from the first year of operation in excess of 5% (on some projects) are typical for their projects. All of Koncentons projects (which have been running for more than 1 year) has had their budgets revised – in the investors favor. Some projects actually yield close to 12%. The point is, they all perform better than expected, which means that the budgets are conservative on all their projects.

The next slide underlines the fact that housing in Denmark is actually cheap these days – compared to Norway and Sweden:

Koncenton has two different concepts in their portfolio that you can invest in. The first is the classic single-building project, but they also have major funds, where they bundle multiple buildings (across different cities) in one project. This is an interesting concept, as that obviously spreads your risk, but it also means that you become a small-time investor in a huge pool of investors. To me, this concept is interesting, but I have a tough time wrapping my head around the potential caveats and pitfalls in these kind of projects, so I think I would prefer to stick with the single-building projects. – If only I had 750.000 DKK…

All in all, I certainly recommend considering investing with Koncenton, if you have a pile of cash laying around 😉 They seem like they know what they are doing, and I like that their projects are financed on non-recourse terms (which means that the investors are only liable for their initial buy-in. The Imbro projects are recourse, so there’s an extra risk there, as an investor – albeit it’s small, it’s still an extra risk that you take upon you as an investor).

You can checkout the projects that are currently open for investors at koncenton.com and they typical have investor (prospects) meetings every month.

Wait, don’t we need a food pick, to round this off?

*If you’re interested in the full presentation from Koncenton, shoot me an email and I’ll forward it to you.

2 thoughts on “A night out – with Koncenton”