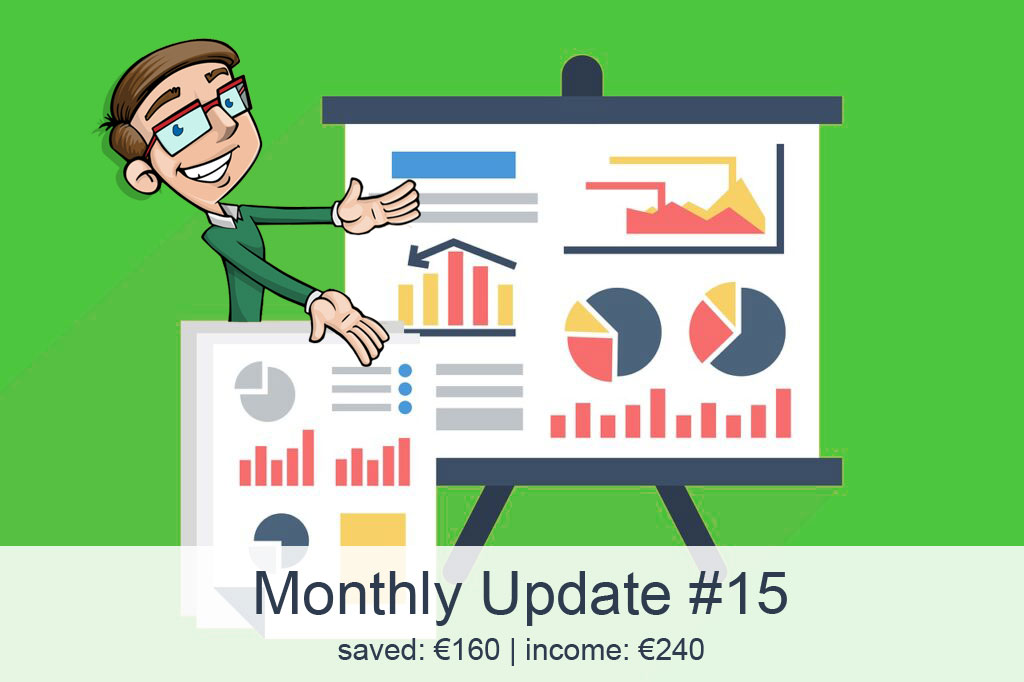 It’s December already! And this means it’s time to look at some numbers from the great month of November!

This monthly update is a bit delayed, as I’ve been on “Pause” since the end of November, where we went on a holiday to Egypt (again!?) to catch some sun and some much needed Vitamin D. Since we returned from our holiday, I’ve been a bit busy at work, and the Christmas month is always a busy month, right?! So I haven’t really had the time to work on the blog.

Anyway, the good thing about passive investments, is that they continue to earn money, even though you’re on a pause 😛

I received my last payout from Bulkestate, and are now contemplating whether to keep investing with them. Jørgen from financiallyfree has been trying to convince them to switch to monthly interest payments, and it seems they’ve had a few projects that pays monthly, but the majority are still full bullet loans. Like Jørgen, I prefer the monthly payouts!

Unless a really attractive project with monthly interest payments show up on Bulkestate, I’m not going to invest with them again. I’ll keep my account open, so I can keep an eye on them though 😉

Meanwhile, I’m planning to exit a couple of other platforms too, and are now on the look-out for new platforms in the likes of Crowdestor, Envestio and Kuetzal. Ideally I’d like to have about 10 different platforms with an average yield around 15%. I realize that the interests are going to continue to decrease, as the platforms gets more and more investors, and become solid businesses, so my Crowdlending roster is most likely going to be in a constant flux-state.  I’ve chosen to keep Mintos in the roster, however it’s becoming increasingly difficult for me to justify that, as the interest rate is now approaching 10%. As long as I don’t have another option, I will keep my money with Mintos, but I wouldn’t mind replacing it with another higher-yielding platform, even though the risk will subsequently also be higher on such platforms.

ReInvest24 has yet to exit a project that was promised to repay on Sep 30th! I wrote Tanel (the CEO) and he said they are close to be able to sell the project, and thus repay their investors. Fingers crossed that they close the deal in December 😉 I’m not worried, but it annoys me that they promise something that they are not able to uphold – then don’t promise a certain repayment date to begin with (make it like Q4-2019 or something, instead of a certain date)!

Another Real Estate investment annoyance this month: My investment with Brickshare fell through, as they were unable to complete their due-diligence process on the property (they did not disclose the reason – they merely said they found some stuff that they couldn’t agree with the owner about). The property is still listed as a “Fully funded” project on their project site though, which is a little odd. Their latests (big) project is now 97% funded, and I plan to get a little stake in that (provided that the due-diligence doesn’t fail again!).

November was an expensive month, due to the holiday, so I was not able to add any significant funds to my Total Balance, and it looks as though December is going to be similarly expensive. It will thus be difficult to reach my goal of €78.323 by the end of the year. If I were religious, I would start praying for miracles – but I’m not. So I will merely move on with my life, like I just don’t care 😛 If I manage to breach €78.000 by the end of the year, I think that will be close enough to call it a win! We shall see! 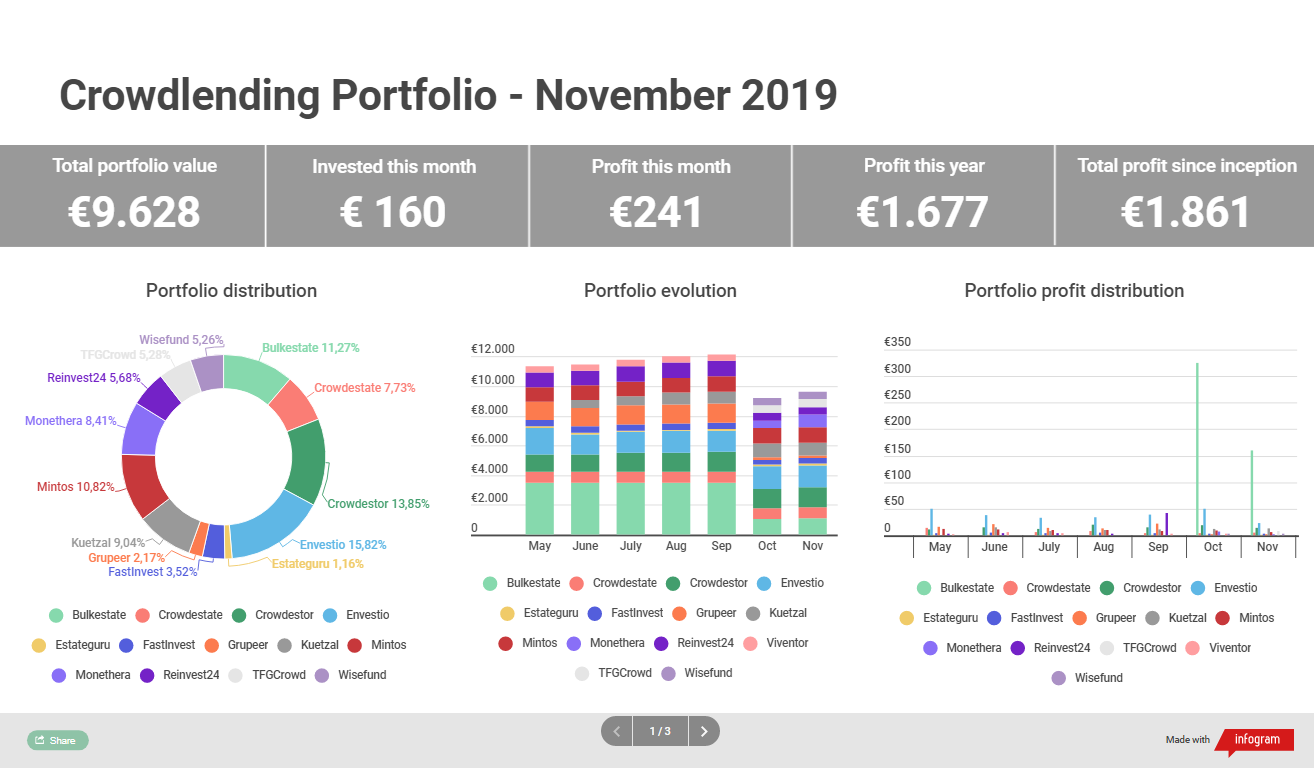 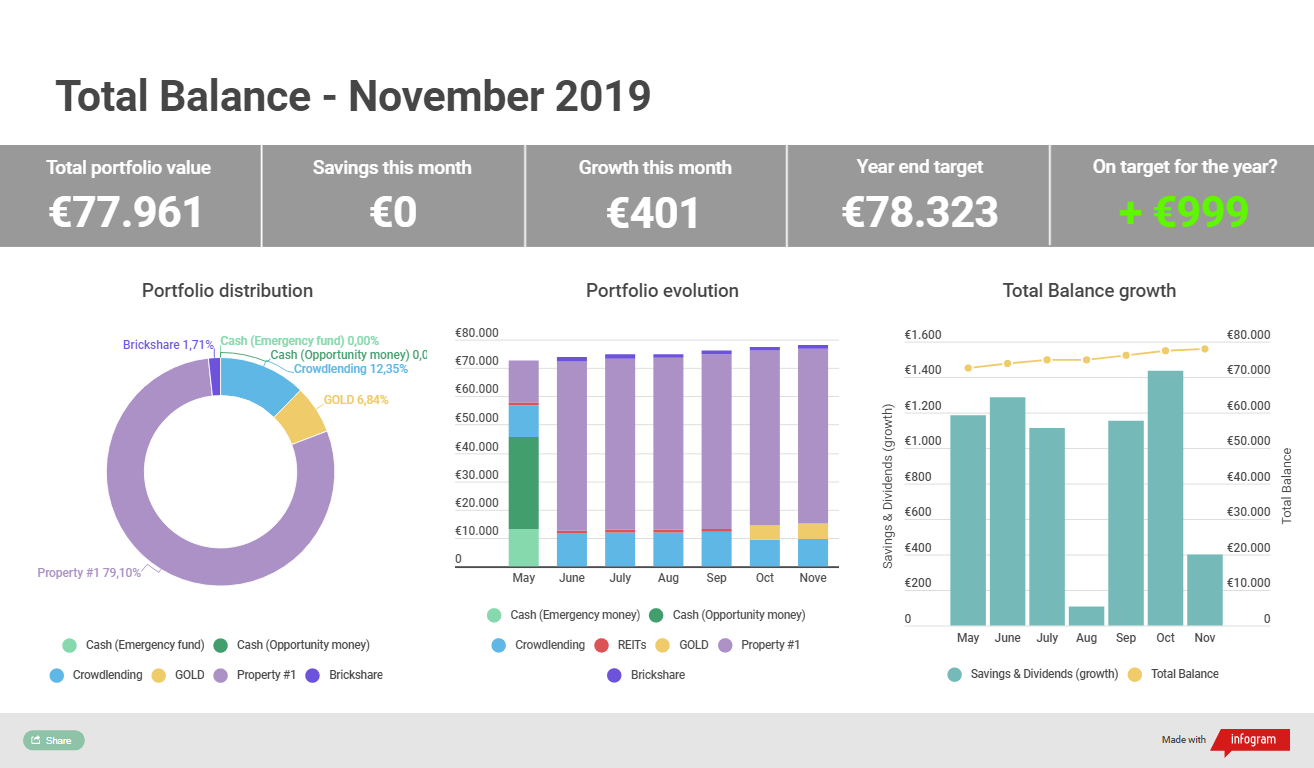 The massive payouts from Bulkestate distorts the crowdlending picture a bit, but who am I to complain? 😛

I think I have a pretty good distribution across the different platforms now, but i will continue to work towards that perfect 10/10 split, which will probably never happen 😛 But a guy can dream, right?

The final slide (Net worth) continue to be among one of my favorite pages. It’s interesting how our Equity and my Pension continue to follow hand-in-hand, and I say this every month: Eventually, I expect my Pension to leave our Equity in the dust, but so far they remain steady side-by-side. Spoiler alert: Our loan is up for remortgage in April 2020, and I currently plan to “convert” it to an interest-only loan, meaning we will not see our Equity grow at all during the next couple of years. Instead we will use the money towards getting Property #2 in the bag. That’s the plan right now anyway – our plans tend to change a lot (on a weekly – sometimes even daily basis) 😉 (EDIT: So did this one!)

I’m still not fully invested on the new platforms (Monethera, TFGCrowd and Wisefund), so I hope to see the income from those platforms go up a bit in the comings months. I plan to exit Bulkestate and spread the cash out on some of the other platforms. Envestio remains the top earner, delivering a steady €20+ every month for the last year. I hope all my platforms eventually contribute something similar to my earnings (at least €10+ would be nice for every platform!).

The “Classic growth chart” never gets old, and I can’t believe we’re almost at the end of 2019! I can’t wait to do the New Years update. Seems almost like it was yesterday I did the last one, but more than €15.000 has been added to my Total Balance since my last New Years update, so the year has simply just flown by!

All in all the month of November has been a below-average month in terms of savings. Also it’s now clear that without any major payouts awaiting from Bulkestate, the coming months will be rather “lame” in terms of crowdlending income. Also, I don’t expect to be able to add any significant funds to my Total Balance in the coming months, because I have Christmas vacation, and because I need some extra funds to replenish some of our other saving accounts (like the vacation savings account). The new year will thus get off to a rough start, unless something amazing happens (you never know – Christmas is the season of miracles…) 😉

See you in the new year!