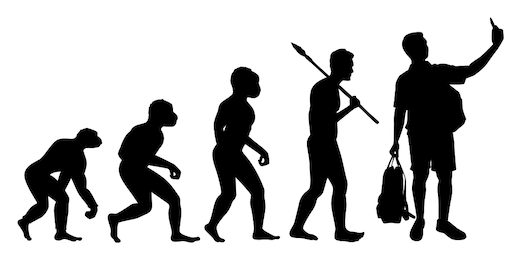 Lets face it, as a species we are highly controlled by our stone-age brain. Since the dawn of time, man have been battling their instincts. At first, it was kill or be killed. Hunt, or die of hunger. Build fires, or die of cold. Build buildings, or die of cold. Snap/Insta or be irrelevant!…

You get the idea! Today more than ever, we are challenged by our stone-age brain on a daily basis. The need to survive is still there, but the means of which we have to survive has drastically changed. We no longer need to fight to survive (at least not in the developed part of the world, red.). Somehow, this makes for an in-balance in the balance of man.

Meh, I can’t be bothered. What’s the point? Tomorrow, I have to do it all over again!? And then you ask yourself that question that everybody eventually end up asking themselves: Is this it? Is this the meaning of life?…

I’m feeling down. I better go on eBay and find a little something to cheer me up with! Ooooh, a 1080p all-weather welcome-home IP WiFi- and POE enabled camera – Click *bought*. Damn you, who invented the 1-click-buy button! Damn you!

Obviously the above is a poor example (I would never buy a 1080p WiFi camera. – 4K is the shit now! Never mind!) of how we tend to react, when we’re out of balance. Some people eat chocolate, some people drink wine, some people buy clothes. The point is, we’ve all been there. Not all of us recognize that we’ve been there, or that we ARE there. But the first step to admitting you have a problem, is to recognize that there is one.

In general, I suck at delayed gratification, and I excel in procrastination (Wait, what does that have to do with anything? – Nothing really, I just thought I would bring it up in the interest of full disclosure!). When it comes to cake I have no spine at all. If it’s available, I will eat it. The same goes for ice cream, chocolate, licorice and gummy bears!

On the other hand, I do like going to the gym, which is lucky because if I didn’t, I would probably be overweight. Now remember, I’m also a master procrastinator, so I’ll go to the gym – tomorrow! 😛

Sometimes, I will go today! Sometimes, I won’t have cake (that’s a lie. If there’s cake, I’m having some!). It’s about finding that balance (unless there’s cake). You noticed again, how The Name again here has a dual purpose? Beautiful, isn’t it? 😉

Aaaanyway, you have to nourish your good habits, and starve the bad, if you want to change anything.

One of my good habits (I don’t happen to have that many actually), is saving money. You already know this, if you’ve read The Story. But, as good as my saving habit is, I have just as avid a spending habit as well, so I try not to feed that beast too often! Every now and then, I do get that little voice in the back of the head saying “It’s OK! You should spoil yourself. You deserve it! Live a little! Screw early retirement!”.

It’s all about the balance. Sometimes I question, whether putting off living NOW, is worth it, in order to be able to “live later”. If one spend ones entire life, saving up to “live later”, will one ever be able to truly live?

The most memorable moments of life often comes from spontaneous decisions. I’ve come to realize this, so for me, it’s very important to leave room to be spontaneous (when you have a 4-year old, spontaneity isn’t really truly possible – but still, you can plan to be spontaneous!). This kind of conflicts with the FIRE idea (be frugal and control your spending at all cost!), so I’m constantly trying to find the balance between the future and the present. It’s not easy, I must say. But I believe it’s worth it in the long run.

Our stone-age brain will keep yelling: FUCK IT, LIVE NOW! – YOU NEVER KNOW WHAT’S GOING TO EAT YOU TOMORROW! Which is why it is so difficult to keep your spending low and your savings high. If it was easy, everyone would be doing it 😉

If you want to FIRE, try not to feed the instant gratification beast too often (it will become a Gremlin if you feed it after midnight!). If you think FIRE is stupid, you’re entitled to that opinion. – Then you can simply continue to go about your day, like there was no tomorrow. It’s everyone’s free choice to make (still), how they choose to live their life. But I truly believe:

So yes, saving money for the future does come with certain sacrifices.

The question that I most often get, when I tell people about The Plan is something like this:

But what if you die tomorrow?! You would have saved all that money in vain! I would much rather live now!

If I die tomorrow, my wife and my daughter will be able to continue the life that they have become accustomed to. They wouldn’t have to sell the house, or get extra jobs to provide for their future. Their future has been taken care of.