October has been a pretty eventful month for me. I made my first crowdlending investments, I found new investment opportunities, and I landed myself a new job.

Technically, I landed the new job already back in September – actually on the same week that I decided to start this blog! – but since we typically have 1 months notice in Denmark, I just started in my new job on November 1st. It doesn’t change a whole lot on the financials (unfortunately), but I get paid in advance in my new job (typical for the financial sector), so I got two paychecks this month! (It’s not fun going the other way – I did that a couple of times).

So my savings are booming this month! I managed to tuck away a whopping 40.000 DKK (€5.333/$6.154). Obviously, this is due to the double-paycheck situation primarily, so lets not dwell too much on that number. Lets look at my investments instead!

Being new to the whole crowdlending scene, it was a major step for me to transfer the first funds to an elect few of my chosen platforms. As you already know, I have a clear preference for real estate, so I’ve chosen to focus my crowdlending investments on real estate, which is why I chose Bulkestate, Envestio and Grupeer as my first 3 platforms to transfer funds to. I’m still considering crowdestate, crowdestor and estateguru, but they don’t really have any projects that peak my interest at the moment. I also chose to enter Mintos, at it seemed to be the most popular platform among newbies.

After that, I panicked a little, and figured that I should have another P2P lending platform in my portfolio, and I then chose poorly. I chose Viventor, which seems to me like a dyeing platform really. After two weeks, I was only 15% invested via the autoinvest, and at that point I kind of decided not to invest further in the classic P2P lending sphere, and just focus on the platforms that offer real estate projects. – So I pulled my funds out of Viventor again (I still have about €150 invested, which I’m just going to keep there for now), and upped my funds on Bulkestate and Envestio instead. I’m considering FastInvest to replace Viventor, but for now I’m happy with the remaining 4 in my portfolio.

So without further ado, here are the stats from my first month of crowdlending investing!

A pretty solid take home of €57, corresponding to a 0,66% increase on the investment. All things considered, I think that is pretty decent.

Of the 5 platforms I have to say that my absolute favorite at the moment, is Envestio. I’m going to be re-investing the dividends, as soon as I reach €100 ( EDIT: I stand corrected. You can actually invest all the way down to €1 – thanks, Christian 😉 ). I can already see that I have more than €50 in interest payments awaiting for November, on Envestio. That’s pretty cool. I should reach €100 in December then!

Bulkestate don’t do monthly interest payments, so it’ll be a while before I see any further income on that account. That kind of sucks! – All I can do is hope that in about 1 year or so, I will get my money back – plus interest. My current account statement at Bulkestate reads:

I’ve invested in two projects, which has (bullet) repayment in October 2019 and November 2019. It’s gonna be pretty dull to follow those investments for the next year or so, when there’s no monthly interest payments! 😛 I got a €25 incentive from my first investment with Bulkestate, and I re-invested that in my second investment.

I’ve invested in one project on Grupeer, and the first interest payment is due in mid November, so hopefully we should be able to see some movement on that account in my next monthly update.

For now, I’ve decided not to put any further funds in crowdlending, as I need about 400.000 DKK in cash to pay for my BIG real estate investment (a development project in Denmark). I believe I have found the project that I want to invest in – but allegedly, there’s a queue to get in on it! The prospect is due by the end of the month, so hopefully I will be able to include my first major real estate investment, in my next monthly update! – So stay tuned!

In my last monthly update I announced my plan to add stocks, crowdlending and real estate to my portfolio. Today, I feel the need to redact a part of that plan, as I’ve decided to leave out stocks from my portfolio altogether for now.

The reason for that, is mainly because I realized that I already have a huge exposure in the stock market, due to the fact that my pension is invested in stocks. This actually annoy me a little bit. I currently have 1.200.000 DKK (€160.000/$185.000) in my pension scheme. When the stock market tanked in October, I “lost” about 5%  in no time, so my yield was suddenly negative. Obviously this is going to be evened out over time, and I’m sure my pension provider know what they are doing. – However, I’ve actually decided to try to channel some of my pension money into real estate. – It’s complicated, but it should be doable.

I’ll keep you posted on that process 😉

So in terms of portfolio diversification, it’s still looking a little heavy on the cash side 😛 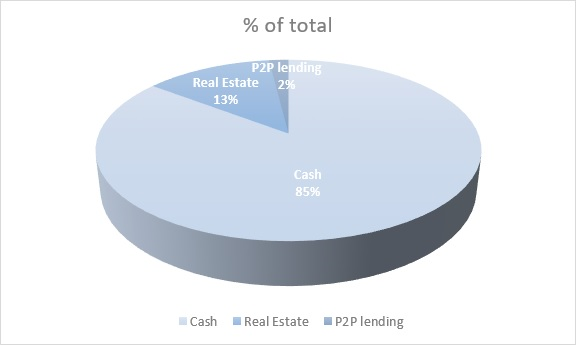 I’ve decided to split my crowdlending investments in two categories; namely P2P and Real Estate. The P2P lending market (Mintos, Viventor, Fastinvest etc.) doesn’t really appeal to me, so I’m unsure if I’m going to continue investing in that category. My Mintos investments is currently yielding just around 10%, so it’s not bad. When you account for the interest tax, it’s just not enough as I see it (my goal is ~8.5% after tax). In comparison, my investments at Envestio currently average at 15%, which after tax is approximately 9%. – So that’s right on the money! 😉

Anyway, my total asset values now looks like this: 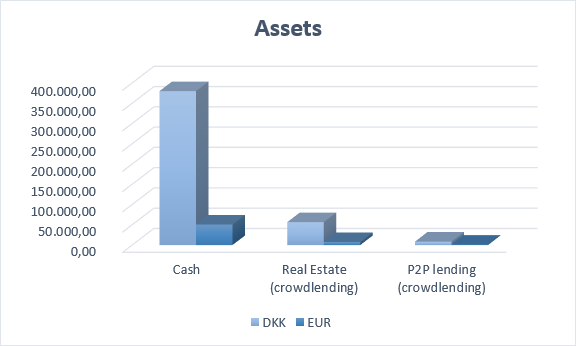