You’ve decided that you no longer want to save any of your income toward FIRE each month. Instead, you’re going to spend it.

How would you use your new disposable income?

TheSavingNinja propose a thought experiment each month (ok, it’s been in hiatus for a while now). I’ve read some of the previous thought experiments (and even participated in one myself – and also one “unofficial” one), and after the good TSN posed a new Thought experiment (#11) for this new year, I decided to re-join this fun little venture!

The end of an era

Ok, so my fling with the FIRE movement lasted for about 3 years before I grew tired of it – just like all of my other previous “projects” before this. I’m a restless soul, what can I say?

I “joined” the movement, because I thought it could help me re-take my freedom. A freedom, which I felt had been stolen from me. The question is: who – or rather, what – stole it?

I’ve been pondering this question a lot lately, and so far I’ve only come up with one plausible answer: Adulthood.

Looking at my daughter growing up with all her naiveté and worriless child play, has made me realize that the feeling of “freedom” is a state of mind. One that gets harder and harder to hold on to as we age. First we get married, then we have children, a big house, expensive holidays and expensive toys and a job to pay for all our expenses.

When I look at my friends, my coworkers and my family, I realize that I’m the only one who doesn’t seem to enjoy “living free”. They live to live (as they say), and I (apparently) live to save.

We live in a 1st World country, and I have few wants. I have a pretty decent well-paying job – in an office, with a pretty nice view of the suburbs. It’s fairly stress less, compared to other occupations. Why shouldn’t I “enjoy life” like my peers?

I remember a time when I used to live like my friends. Back then I didn’t give much thought into my purchases. I’ve always been good at saving money, which enabled me to make larger purchases a couple of times per year. A nice holiday with the wifey, a nice new stereo, a projector or a new laptop. A car, even. Cars have always been somewhat of a passion of mine. Somehow that time seemed more simple. Hell, I even felt a lot more free back then…

The other day I overheard a couple of colleagues talking about what car they would buy, once they had saved up enough cash for it.

Leasing is for losers. You’ve got to own that shit outright – that’s the gangsta’ way. If you buy that car, you’ll be the king of your town!

(These are younger colleagues – and this exchange of words actually happened to me in real life!).

Delayed gratification is for losers (apparently?).

I’ve grown tired of feeling like the outsider. I’m done “holding back”. The time for living is NOW. Screw it, I’m done chasing FIRE! 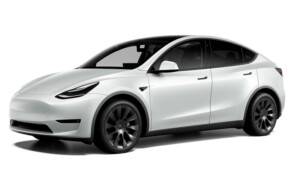 Oh, you sweet, sweet dream of an electric transportation vehicle! I’ve dreamt about you since the first time Elon Musk tweeted about you!

FINALLY, I get to call you mine!

Finally, I get to rub it in my neighbors face that he could only afford a Model 3! HA, what a loser! 😛

“What’s that, honey? You want to go to Thailand for two weeks during Christmas and New year?!” – DONE!

Being a saver of nature, I think I’ll keep that in the bank for a rainy day. I know the wife certainly has many projects she’d like to see done around the house.

“What’s that honey, you want an extra bathroom?”. Ah yes, maybe it is a little “old school” to just have one toilet in the house – I mean, we are 3 people after all. I certainly would love to have my own bathroom! Let the girls share one, and I can have my own!? – DONE!

“What’s that honey, you want a new kitchen too?!”. Hmm, it does look a little dated, doesn’t it? I think our house could do with an update to the main kitchen area, yes. – DONE!

So, I’ve spent my entire Total Balance on stuff that is considered fairly normal in todays society. It took me (us) almost 4 years to accumulate that much money. It took 5 minutes to spend it all.

The above mentioned “items” are actually something that we DO want. The Tesla Model Y is undoubtedly my dream car, and while I could easily afford it on my salary, I (we) have made a conscious decision to not WASTE money on transportation. I drive my little Renault Zoe to work every day knowing that one day I won’t have to. One day, my investments will grant me access to my dream vehicle. I can live with that – it’s not always easy, but I’ve gotten used to it by now.

What is however not easy though, is continuing to save on “everyday luxury”. Food is our households great passion, and we do get occasional takeout, but I’d like to be able to “go out” more (STUPID pandemic) and enjoy a nice restaurant meal. This is actually something that we want to prioritize. I have absolutely no quarrels sporting a 5 year old iPhone, and I do not need fancy clothes (I never have), but being able to go out to eat (or take mini trips) whenever we don’t feel like cooking – this is something I would definitely spend my increased cash flow on (since my new FIRE-less life saves me about €1200/month that I can now channel into my new frivolous spending habits!).

For me it always has been, and always will be about finding the right balance between spending and saving. Going extreme in either direction is not in my nature. I was once a mindless spender, and I do not want to go back to that – but sometimes I do want to be able to make a purchase without having to think about the consequences for my Total Balance.

I’m Neo and I’ve (somehow) opted to take the red pill. There’s no going back now…

These are some of the other bloggers that I follow, who also participated in this thought experiment: