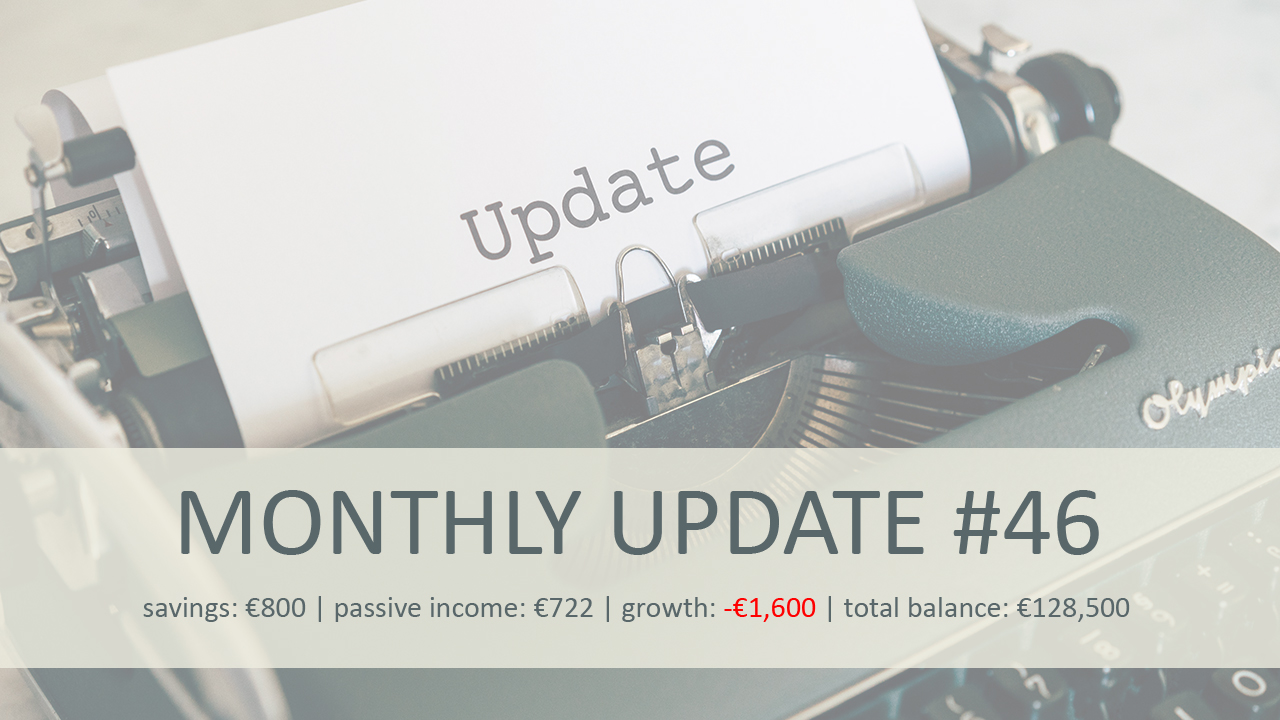 Another month – another update from yours truly!

It’s summer holidays, and thus I’ve spent quite some time in the proverbial hammock, as is the norm 😉

I’ve thus not had a lot of time (read: I’ve honestly just tried to forget the past couple of months – from a financial perspective at least) to blog.

But these updates are important to me, as I feel like it keeps the FIRE going (get it?! 😛 ) so I’m doing my best to continue to write them!

At this point it should come to no-ones surprise that it seems I’ve managed to lose another couple of hundred € on a failed (Crypto) adventure. I shall spare you the details, but it seems the crypto lending platform Celsius got them selves into trouble by speculating in LUNA. And remember what happened to LUNA?

That’s right. It pretty much vanished over night. As a result (this is not the official reason though – but I believe it was the finale nail in their coffin) they’ve filed for a Chapter-11 bankruptcy. The platform is still up though, so I have slither of hope that at least a few of my €/$ will be recovered. As of June 2022 my main holdings on Celsius was (is) about €500 worth of ETH. I will be sad to see it go (if it does, which seems highly likely at this point), but on the other hand I will not be losing much sleep over it. It was a(nother) gamble that did not pay off.

Meanwhile my other Crypto lending platform (Nexo) seem to still be going strong (I hope I’m not jinxing it by saying this 😛 ), so I am at least satisfied that I chose Nexo for my main holdings and not Celsius.

However, I have been getting the feeling lately with all the general market turmoil (crypto, stocks, hiking interest rates and runaway inflation) that cash might not be that bad after all. So I will be looking to bolster my pockets with good old fashioned CASH for the next couple of months/years. I’ve been spending a little too much time on endeavors that has not brought me ANY closer to my targets as of late, so I’m trying to refocus and regroup. My number #1 target IS still – and always has been – to land another property. It seems I will need to find those ~€100,000 to land a proper(ty) deal, so that will be my main goal for the coming years. No more messing about! Eye on the ball, Nick!

On another more positive note though: I’ve made some money this month!

I had invested about €14,000 with The Many (formerly known as “Brickshare”), and after they sold all their properties all investors were cashed out. The deal finalized in June and I received a nice payout of around €15,333 (a total return of around 8.5% – after tax). It’s been a couple of years since I first invested with The Many, and while I’ve often complained about their lack of communication and transparency, I don’t think I can really complain about the outcome.

I would have preferred the money to stay invested though, as the properties were yielding a pretty good dividend. Now that I’ve been cashed out I already feel the money burning in my pocket! Given the current market situation, I don’t think I should be complaining though 🙂

The Many now only has so-called “closed funds”, which means that there is no longer an early-exit option from their projects. I’m not crazy about leaving my money with The Many for up to 10 years, although I do believe their projects are still fairly well structured and interesting. For now I have left The Many completely, and I’m not sure that I’m going to return. Never say never though, right? 😉

Despite this inflow of cash, it was not enough to keep my Total Balance in the green! Another month of horrible market conditions. Hopefully July will see some of it return, cause I’m getting sick and tired of reporting red numbers! HAHA

On a completely different note: My mother turned 60 in June, and had invited the whole family to Spain for a week! So we went on vacation outside of Denmark for the first time in 2 years. That was pretty exciting (especially since it was free! 😛 ). It was a little too hot for my taste, but looking back it was a great getaway for all of us. It seems the days of the lockdowns are getting further and further away, and life is now truly starting to go back to normal (Not counting the insane levels of inflation! HAHA! Lets not open that can of worms now!).

This is only the 2nd month in history of this blog where I have to report a negative growth in the Total Balance. It sucks! But I know that the money that has been “lost” over the last couple of months will eventually return 🙂 (I had to wait 3 weeks to write this update before my mind was ready to accept this HAHA!).

Anyway, when I began this blog I had €53,000 in cash and I eventually sunk it all into Property #1. I remember how hard it was to just sit and WAIT for the right opportunity with the money burning a hole in my pocket. I think it might be a tad easier the 2nd time around – but it seems my mentality around this can shift from day-2-day haha. Last week I spent CAR hunting (our family car is aging, and it needs some repairs – so naturally I instantly go car hunting). I think I’ve cooled off now though, so I will keep the old beast alive for another year or two (at least until we land the next big property! – Maybe…I think! HAHA).

Despite an influx of cash from The Many selloff and my savings of €800 (it’s summer – we always spend a little extra during the summer holidays) and a little passive income, it was not enough to prevent my Total Balance from moving south. Better luck next month, Nick!

My stock holdings have taken a pretty massive beating for the last couple of months, and Crypto has only added even more fuel to the fire (no pun intended!). At least it looks like July is going to be a bit better on this front! (if we don’t count a potential Celsius write-off!).

The only thing positive I can say for this month, is that USD is now almost on par with the EUR. This is crazy! I don’t remember ever seeing USD:EUR being 1:1, but it’s pretty darn close right now. I’m not sure this is to my advantage (long term) though, as this is typically bad news for Europe overall. 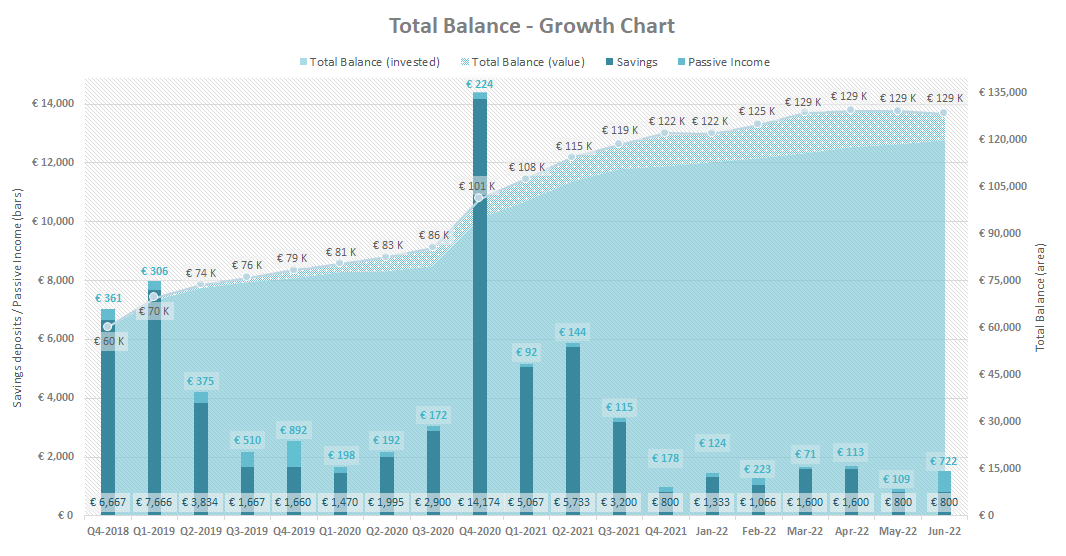 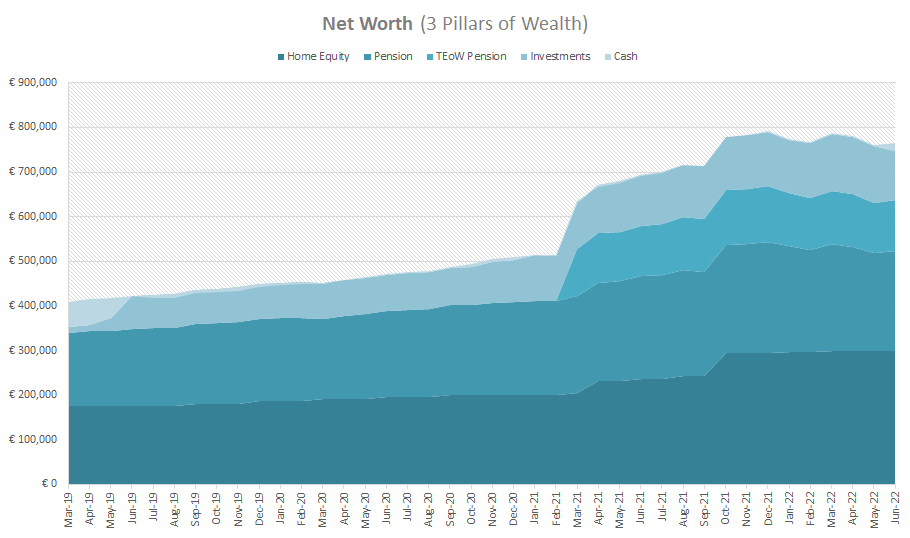 For the first time in a very long time, we’re now pretty cash heavy. Historically that has been difficult to me, as there is a psychological aspect to having cash that I sometimes struggle with. One part is the opportunity cost of not having it invested, the other is the simple “I have money – then I must spend it”-mode that I’ve often found myself in in the past. It must be something that’s deeply rooted in our societal education. Everywhere we look there’s ads and commercials that urge us to spend our money. The only way I’ve found to combat this, is to simply “hide” the money from myself. So I don’t have it in my normal bank account, I currently have the majority with my broker. Which is also not great, because here I also find myself inclined to spend them! Albeit this would be on stocks or ETFs, so I would be buying future income 😉

However, I’m waiting on the perfect property deal to present itself, so until then I (we) will be very cash heavy. I can live with that for now 🙂

I finally received a nice payout from The Many, and I’m now pretty cash heavy!

Celsius announced that they’ve filed for a chapter-11, so I’m mentally preparing myself for another write-off here (about €500).

The markets have not been kind to us this June. We cross our fingers that July will be a bit more gentle, as the last couple of months has been rough on our finances 😉