When I started this blog back in September 2018, and wrote my first post I really didn’t have a clue what I was doing or where I was going (this is the honest truth!). I had read a lot of other FIRE blogs, and thought it would be a good idea, to create my own blog, so I could follow (and allow others to follow) my progress towards FI.

A little over 3 months later, here we are! I wrote 16 blog posts since, and I grew my Total Balance by more than 15%! Granted, the main reason for the nice growth, was due to a double-salary payment back in November. None the less, keeping my eye on the ball, and writing the monthly updates really helps me kind of “keep myself in check”.

Historically, I’ve not been a huge fan of New Years resolutions, and I’m thus not going to set any major new goals for myself, for 2019. I see a lot of FIRE bloggers set a whole list of goals for themselves, which they then often fail miserably at achieving. Since this is a FIRE blog, I will focus on my FIRE goal alone 😉

I know that the “thumb rule” of FIRE is: Accumulate 25x your yearly expenses, and with a 4% SWR (Safe Withdrawel Rate) – you’re home free!

I follow bloggers who manage to save upwards of 60-70% of their net income (savings rate). I’m currently at just around 15% (25% if you count my mortgage payments)…Not very impressive. However, my goal of having a Total Balance of €400.000 was never a goal that would make me FI for life. It was a goal I set, based on the assumption that I would “bridge finance” my early retirement from my 50’s into my 60’s. When I’m 60, my pension will kick in. Obviously, it would be nice if a Total Balance of €400.000 would make me FI for life, but given inflation and all (and our exorbitant spending habits), that is not likely to be the case. I would most likely have to double it (to €800.000) at least, to be FI for life…

Well that’s kind of upsetting! No, not really. I still think my goal of €400.000 is a nice target (for now), and it would certainly give me options (to work part-time for example), if I had that much cash in my stash. I don’t include my house equity in my Total Balance (which at the time of writing is more than €150.000), which is obviously also only going to increase over time (provided that I keep paying off my mortgage – which I might not continue to do). It might come in play later, but for now I will leave it out of the picture…

So, I’m not going to change my ultimate target just yet (although I probably should – maybe next year? 😛 ). I am however going to up the ante a little!

So, not only do I get to “retire” 2 years prior to my original calculations, now I can also cut 1.23% off of my avg interest rate goal. Given the taxes on dividends/interests, this actually means that an average of 12% interest rate on my investments is enough (it was 14% before). If you’ve noticed, I currently average 13% on my crowdlending investments. Of course, reaching pre-FI 2 years earlier than anticipated now means that I need 12 years worth of expenses in my stash, instead of only 10 (to bridge my expenses from my 50’s to my 60’s)! Let’s not dwell too much on that fact for now 😛 (It kind of ruins the mood!). That’s going to be a problem for future me to deal with (future me says: damn you, past me!).

Or for the more visually inclined (I do love me some graphs!): 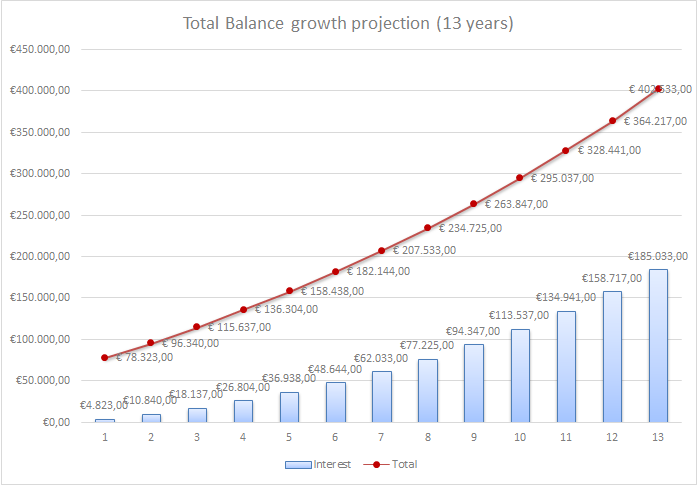 Isn’t it awesome!? A picture says more than a thousand words (from a bloggers perspective, this is interesting – I’m closing in on 1000 words in this post already. Should I just stop typing now?… 😛 ).
13 years to reach my Total Balance goal! Away we go! Onward and upwards!

Oh boy. €400 (after tax!?) is far from my average of €80 (pre-tax) in 2018…How will I ever achieve this?! Let’s be honest, it’s highly unlikely that I am going to achieve this – especially given the nature of a lot of my investments (which only pay dividends once per year), and the fact that I have yet to invest in that real estate project that I’ve been japping about for the last couple of months. Let’s imagine that I finally find a project worthy of my money in March 2019 (this is just an example). This means that the dividends from this project wouldn’t arrive until March/April 2020! And in the meantime, I wouldn’t get any interest at all, on my invested money (at least not interests that will actually hit my bank account – and remember, I only count realized earnings!).

Well, aggressive goals require aggressive measures/actions to be met! I could set my goal to €200/month, which I believe is within reach/reason for me. – But what’s the fun in that!? 😉

*The calculations above are provided courtesy of TheCalculatorSite