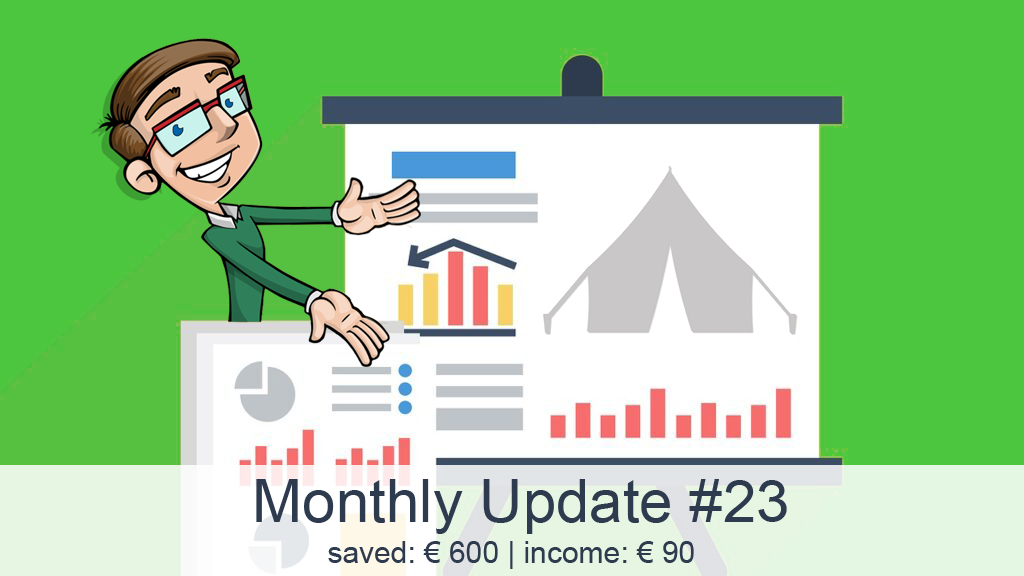 July 2020 is now in the past, and it’s thus time to take a look at the financials!

We’ve been on summer holiday for 3/4 weeks of July, so I haven’t spent a whole lot of time “in the community” this month, which clearly reflect in my blog views, as they’re at an all-time low (perhaps also because all you readers are also taking a little break from the FIRE blogs 😉 ).

Summer holiday aside, I actually managed to make a few new investments in July (before we went on holiday).

Also, August 1st marks the 1-year anniversary of owning Property #1! YAY! This is big news, as I’ve decided to now write-up the value of this asset, corresponding to the amount of debt that we have repaid during the year (give or take). A little spoiler alert: This amounts to a decent chunk of cash! 😛

As the title of this months update alludes to, we went on a little retreat. As the true FIRE enthusiasts that we are, naturally we opted for the only true FIRE-style vacation form; camping.

However, those of you who know me knows that the classic form of camping (in a tent) is not really my style. So we opted for the luxurious version and rented a cabin (actually we stayed at 3 different places, so 3 different cabins – all with running water and a bathroom though 😉 ). I like vacationing in Denmark (the wife not so much), but you always worry about the weather. All in all I think we had a pretty good vacation, and my daughter had a blast at various playgrounds, indoor water parks and roasting marshmallows (and other roast-able stuff) on the campfire.

In other (related news) I’ve also decided that it’s time for another retreat. Most of you have probably already seen the writing on the wall, but it’s taken a bit of time for me to acknowledge the fact that it’s time to retreat from crowdlending (see what I did there? 😛 ). I’ve been withdrawing funds from this asset class for more than 6 months now, and this month something happened that made me take the final decision; I found a potential Property #2.

So I decided that it was time to stop fooling around, and gather all the pennies I could scrape together, to prepare for the massive down payment that Property #2 will require. Unfortunately, I didn’t come to this realization before I actually managed to make a new crowdlending investment in a danish real estate (development – non equity based) crowdlending platform called Fundbricks.com. Oh well, hopefully it will pay off a few dimes in about 8-12 months.

Meanwhile, I will continue to withdraw from the baltic crowdlending platforms as my money are repaid from finished projects. Hopefully I will be able to recover the majority of what I’ve currently invested. I haven’t made any new investments in 2020 on any of my current platforms, so funds should slowly return to my account for the rest of the year (hopefully).

The time-frame for Property #2 is somewhere in the 3-6 months time span, so I have time to accumulate some more funds before it’ll be time to deploy some serious amount of leverage.

Lars Tvede (the danish Investor/Entrepreneur) has been very vocal about his dealings lately, and in early July he said that he had just bought a big position in Silver.

So just for fun, I figured I’d try out the new commodities trader in Revolut. I had €245 in my Revolut account, and decided to exchange it into Silver. Shortly after (a week or so) Silver started moving upwards. I’m not completely sold on the Revolut App trading though – it’s very basic, and seems a bit beta-ish. It doesn’t show the percentage change of your holdings, only the current value, so you have to do your own calculations to see if you’ve actually gained or lost anything. Seems a bit silly really, because it can’t be THAT hard to implement this functionality?

Revolut has changed their terms of use for standard (free) users, so it’s becoming less and less interesting for me to continue to use their service (you’re now limited to exchanging €1000/month – above that comes with a fee). So I decided to open up an account with N26, just to check it out! I will keep you updated about my choice of Virtual/Online Bank 😉

Besides that, FundBricks.com was added to the roster. I’d been eyeing them for a while, and they were just about to close a big funding round for a project in the center of Copenhagen that I think looks really promising. They’re promising an 8% interest, and the loan is 9-12 months. Again, it’s not going to make me rich, but I figured I’d give it a spin, just to experience how their platform works. 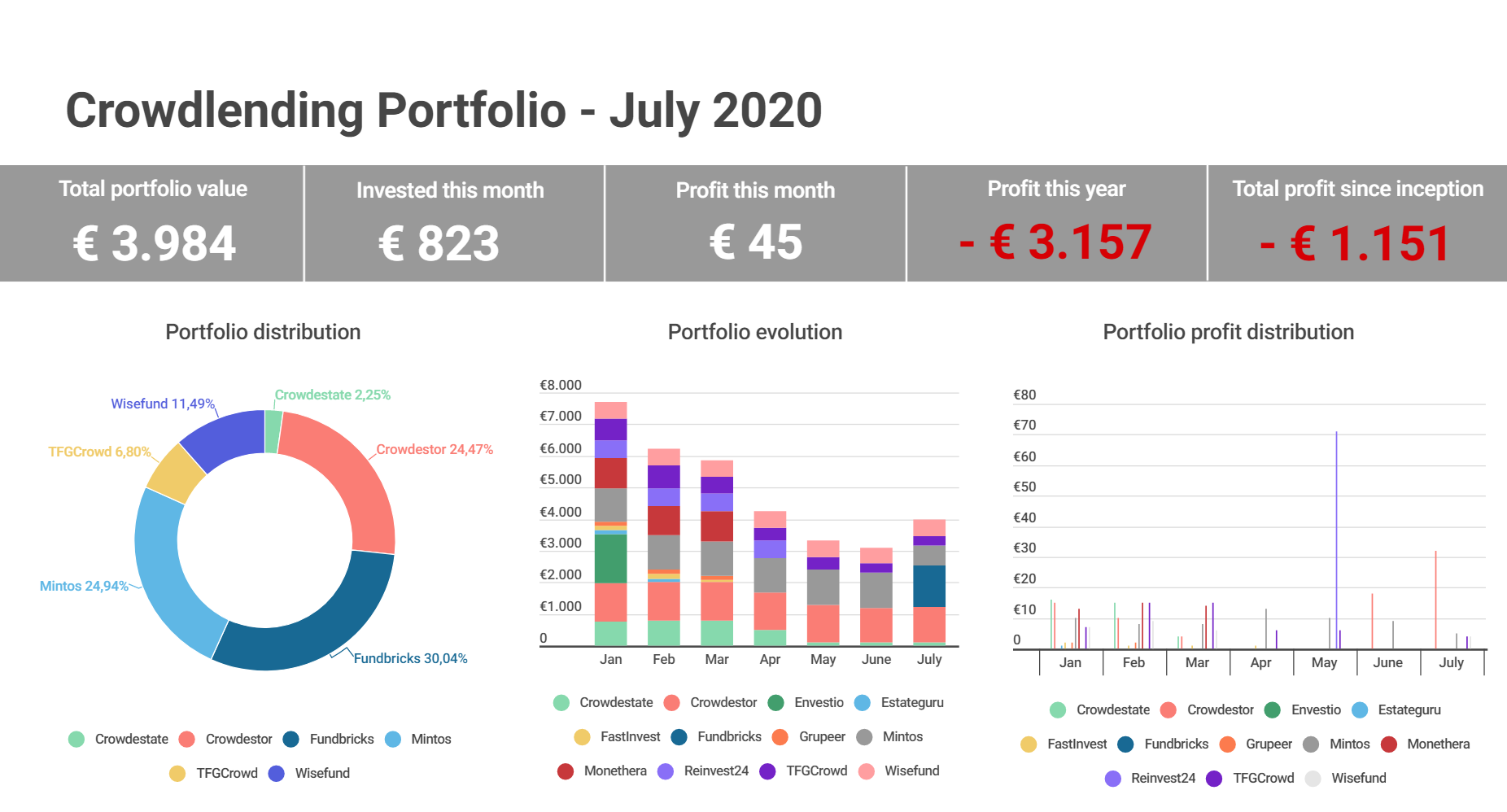 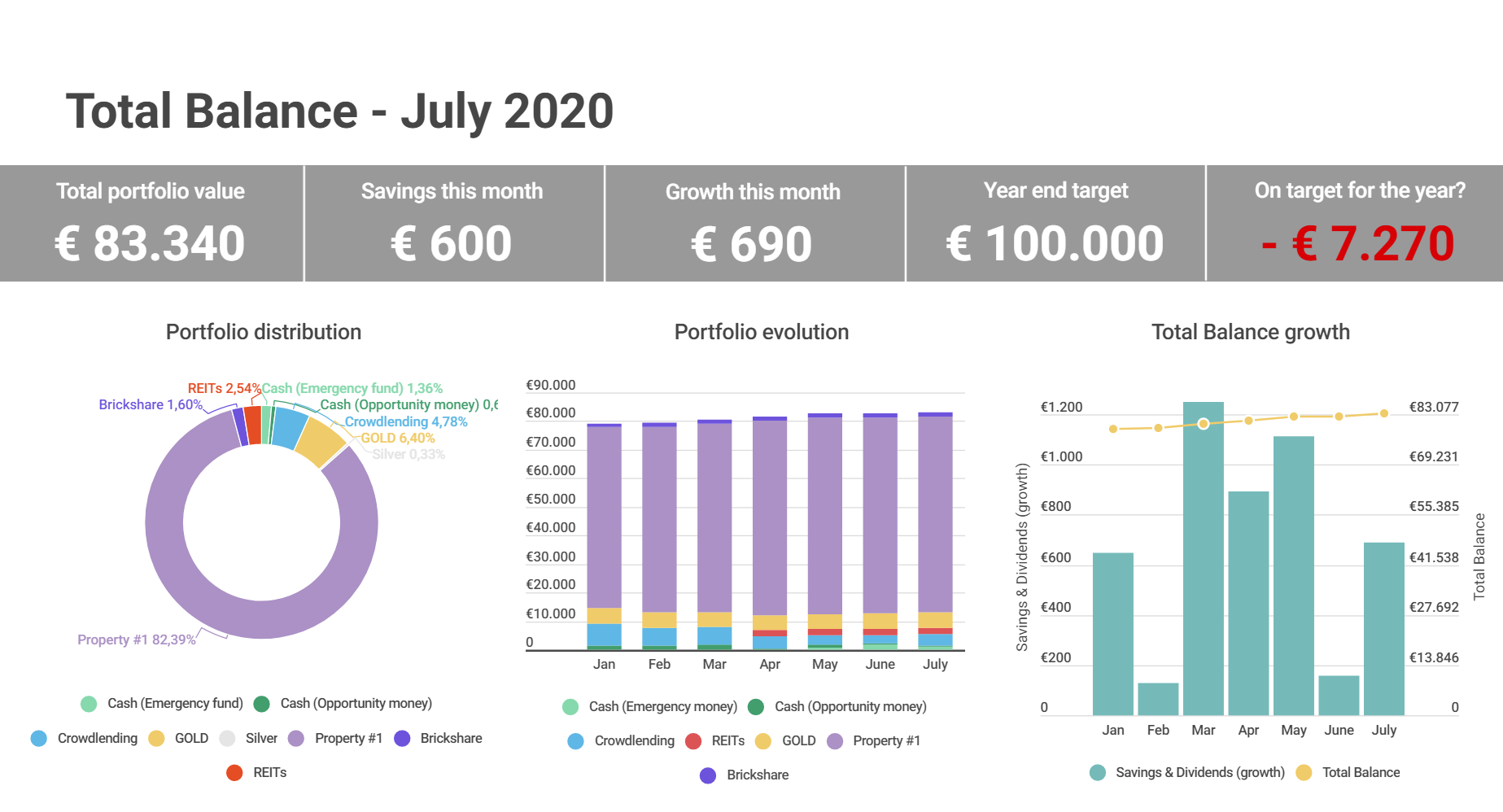 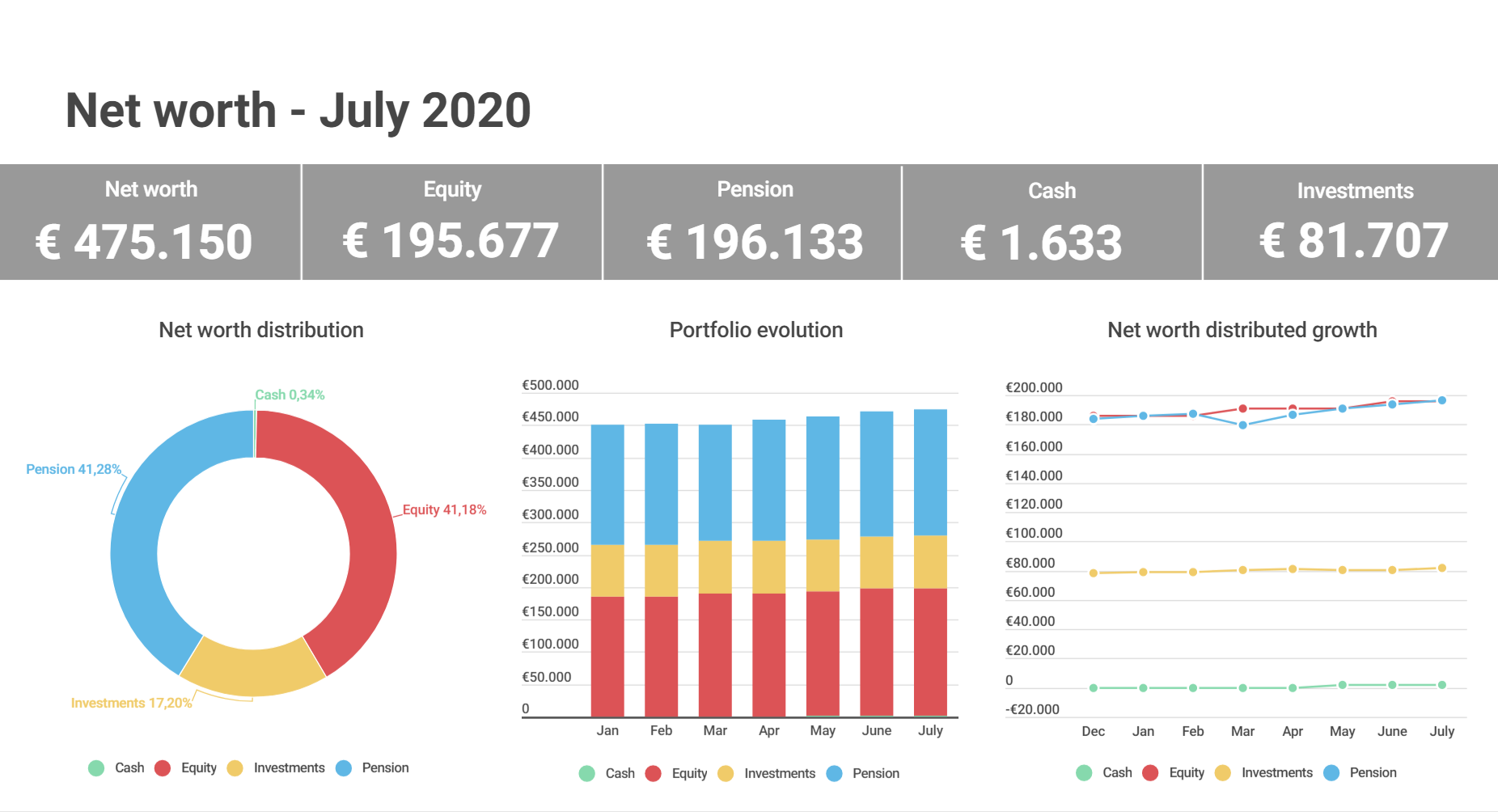 For the first time in a while I’ve added cash to the crowdlending pile. However, this doesn’t change the overall trend for this asset. I don’t plan on adding anymore money to this bucket. In fact I’ll slowly be withdrawing it, as projects are repaid. I just don’t feel comfortable re-investing at this time, and I need the money to finance the purchase of Property #2.

I mainly continue to do the infograms for the stuff on Page-3, really 😛 I’m still awaiting the day where my equity and pension go their separate way, but for now they continue as two lovebirds hand-in-hand. My Pension is currently up about 2% for the year, which in today’s market is pretty respectable I think. I have no idea where the market is going to go from here, but I still hold a decent chunk of cash (at 2% interest) on my pension account, so should the market take another drastic dip, I’ll be ready to move some more cash into the market (like I did in April). But for now, I’m pretty happy with my allocation.

Crowdestor brought in a decent income this month, and together with a few dimes from various other platforms, crowdlending netted a total of €45 this month. Adding my REIT dividend and my new silver holdings adds another €45 to the passive income this month. Which then gives a total of €90. It’s pretty clear that my passive income is not going to change a lot short term, so I remain focused on adding as much as possible to my savings. Due to the summer holidays (always expensive vacationing in Denmark) that only amounted to €600 this month. Next month should hopefully be a tad better.

But the big news this month is obviously my Property #1 book value. I decided after 1 year of ownership that it was time to write up the value (added by paying off debt in the project).

Even though I believe the value is there, I feel it would be cheating, so I’m not going to do that 😛

Instead, I will add a new line to the classic growth chart, showing my Total Balance including the (adjusted) value of Property #1. 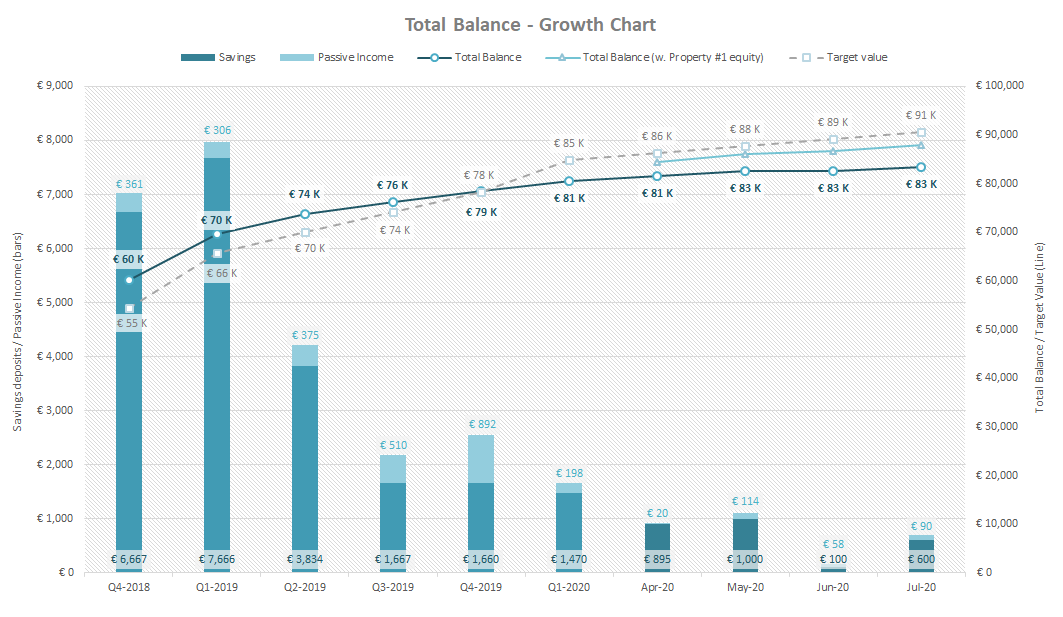 The chart had reached a point where it was impossible to add anymore monthly columns, so it’s now been converted into a Quarterly view, with the last 6 (give or take) months still visible in monthly increments. Eventually I guess it will move from a quarterly to a yearly view even – but it will be a while before I have to convert it again, so I’m quite happy with the result for now.

From the chart it’s clear that Q4-2018 and Q1-2019 was exceptionally good in terms of savings. This was due to a double-salary and the payment of “vacation money” (something we get in Denmark when we switch jobs). Since Q2-2019 it’s been going downhill! I’m gonna attempt a turnaround of that trend in Q3/Q4-2020 but so far it’s not looking that strong 😛

As always though, I see light at the end of the tunnel, and I’m positive that Q4-2020 is going to be showing a phenomenal savings rate (hint: more vacation money coming our way! – No I didn’t switch jobs, but the government has decided that the Danes need some “spending money”, so they’re paying out 3/5 weeks of our vacation money to get the wheels spinning again after this whole Covid-19 ordeal).

I thus remain positive that I will be able to reach my yearly target of €100.000. I know it doesn’t look like that right now, but none the less I remain positive 😉 (uncle Nick always has some tricks up his sleeve, remember? 😛 ).

A below average month that didn’t break any records in terms of passive income or savings. Better luck next month, Nick!

I revamped the Classic growth chart to a quarterly view, and I decided to finally let go of Crowdlending. It’s not completely gone yet though, as I put some coins in a danish platform called Fundbricks.com early in the month.

I also traded some Silver (via Revolut), but ultimately decided that I’d better stick with Properties for now 😉

I dropped a little teaser about a potential prospect for Property #2, and this property will demand a big loan (leverage) on my part, which I’m slowly coming to terms with, if I want to add another property to my portfolio – and I do 🙂

From my previous leveraged adventure (Property #1), I learned that having RED numbers in my account statement acts as a really good motivation for me, to save more than usual. We shall see how this plays out, but it probably won’t materialize for another couple of months – maybe not even this year. We shall see!

Anyway that was it for the update this month! See you next month, people! 😉