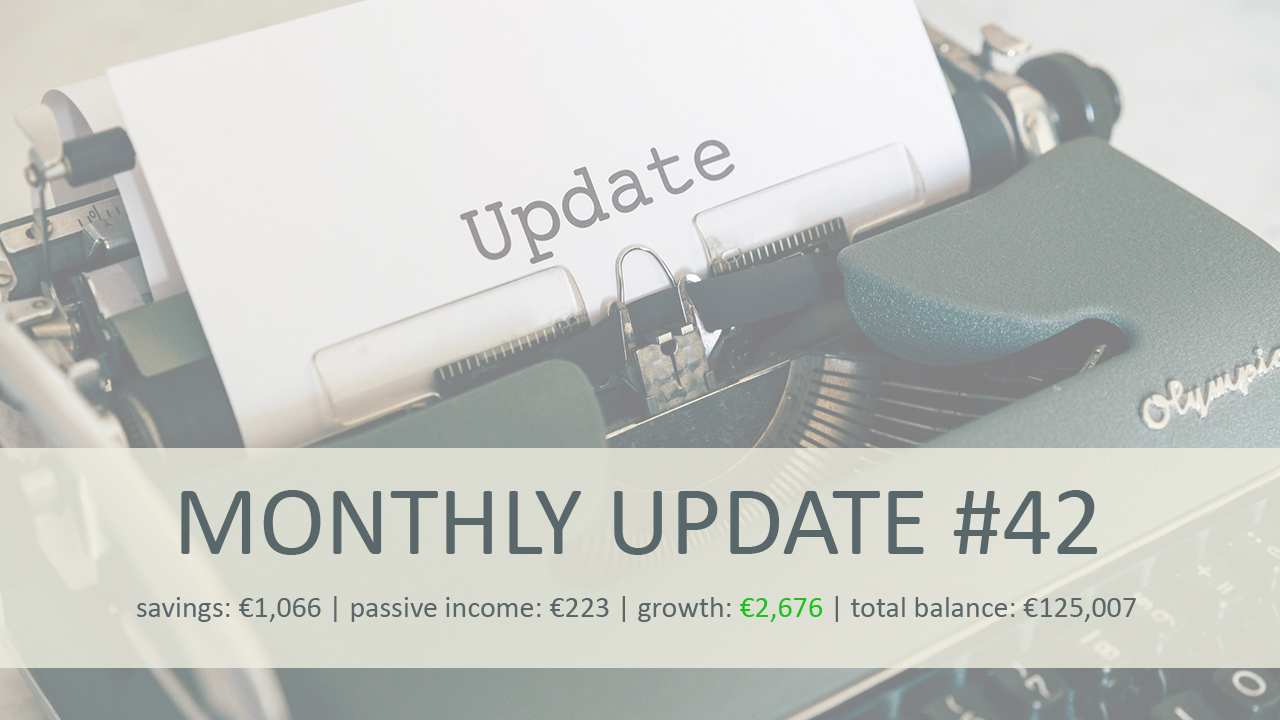 Just when we thought there was light at the end of the tunnel a certain Mr. Putin sticks a giant branch in our wheel.

One crisis replaces another.

War is at our doorstep.

Given what the Ukrainians are currently facing, it seems somewhat insensitive and inappropriate to be discussing our investment returns.

The only comfort being history; good always triumph over evil. Eventually…

Crisis or not, time still goes by relentlessly. One day replaces another – and then another. Before we realize it summer will be here, and hopefully so will peace.

I’ve been busy at work and at home (still helping out my sister in law remodeling her new home). I’ve not had much spare time to write or be active in the community, so I’ll keep this update short (really – are you actually capable of that, Nick?!).

It’s somewhat bitter sweet – given the current situation – that February 2022 was one of my best months in more than 2 years in terms of investments.

I finally received my principal (with interests) from my last remaining crowdlending adventure with the Danish platform, Fundbricks. Together with my Canadian dividend stock portfolio, and my crypto interest I netted a passive income of €223 in February.

While dividends are not the most tax efficient way of earning passive income, it certainly is motivating to see those € drop into your account without you having to do ANY (real) work for it 🙂

The payout from Fundbricks suddenly left me with €1,493 un-invested in my account, and I decided to put it back to work right away. – So I bought ANOTHER Canadian REIT, Granite REIT (GRT.UN). It’s got a somewhat lower (some would say healthier) payout ratio than my current REITs, so it will not add a huge amount of dividends to the portfolio, but I believe it’s currently great value and also expect some capital growth from this investment.

I put all of my February savings into the Nexo platform and locked it for 3 months for that nice 10% APY on EURx. I was reluctant at first to put more money with Nexo until I experienced their live chat feature, which convinced me that support was indeed very attentive, and I plan to top up the account until I reach €4000, as this would net me €30/month on those funds. I think that’s a nice little supplement to my other dividends.

The only problem with this approach is that those 10% interest comes at a price: I have to hold 10% of my portfolio in the platforms native NEXO coin. The last couple of months this coin has moved between $1.70-$2.50 (ish), and I noticed that it was quite often above $2 at the beginning of a month, and then dipped under during the month. So I postponed my Nexo coin purchase this month – and finally bought some at $1.97. Shortly after it soared to $2.30. So what does a gambler do? He sells them – and buys again at $2.05 HAHA! I do not recommend this – but I had to try it just this once 😛

Anyway, all of my passive income this month was basically COMPLETELY EATEN up by the energy price hikes. Geez. We’re dependent on both electricity, gasoline and natural gas (heating), and all of them has seen insane price increases for the past couple of months.

I remind myself that it would only be much worse, if I didn’t invest at all, so I try to “forget” about the crazy inflation that we’re currently seeing on all consumer goods (and especially energy). The inflation (at least in DK) has been record low for the past decade (<1%), so I suppose we were due for a (giant) hike.

Since I’m now working for a company who build wind- and solar farms (and make gangstah money from it), my interest in these technologies has of course increased dramatically. I’ve started to investigate the possibility of adding a solar roof (the built-in-the-tiles kind) to our outhouse (our main house has thatched roof, so no solar here unfortunately). There’s a Danish company who specialize in this, and I’ve seen some of their installations, and they look quite nice (you can’t really tell that the tiles have solar panels embedded in them). It’s of course quite costly, so it’ll take many years to recoup such an investment, but it just makes sense to me – especially when we have an EV – to use clean self-generated power in the household. It will unfortunately not be possible to become 100% self-sufficient with clean energy (we simply do not have enough sun in Denmark), but 30-40% should be possible.

I have decided to retire the NET WORTH page of the Infogram (I will create a “Classic Chart” for this instead). This is primarily to shorten the amount of time it takes me to create these updates.

GOLD has been a good investment for the past couple of months, but I only write-up the value of my gold coins once per year, so the value will not be in the books until the end of the year (and at that time who knows what has happened?!). Also the dollar continues to strengthen against the euro (which is also good for my Gold holdings), but I still expect the dollar to weaken against the euro during the coming years (that stupid Putin has foiled it for now though). This is one of the reasons why I prefer CAD over USD, because unlike the USD I expect the CAD to strengthen against the EUR in the coming years (this movement has been ongoing for the past couple of years).

Next month should see a decent dividend income from my dividend portfolio (as some pays quarterly).

As always, I include the Classic growth charts for tracking purposes: 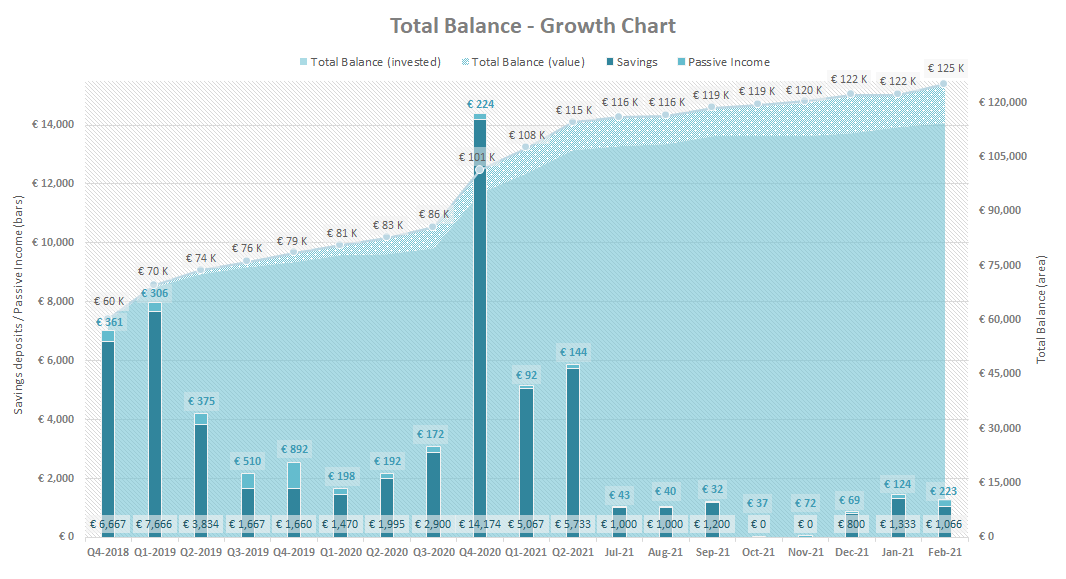 As something new this month, I’ve moved the Net worth graph from the Infogram into a “Classic chart”. I like to include it, because it provides perspective on what I call “The 3 pillars of wealth”, where our Total Balance is 1 pillar, and the others are our home equity and our pension (Cash is in this context part of the “Investments / Total Balance” pillar, as it’s awaiting to be invested 😛 ). 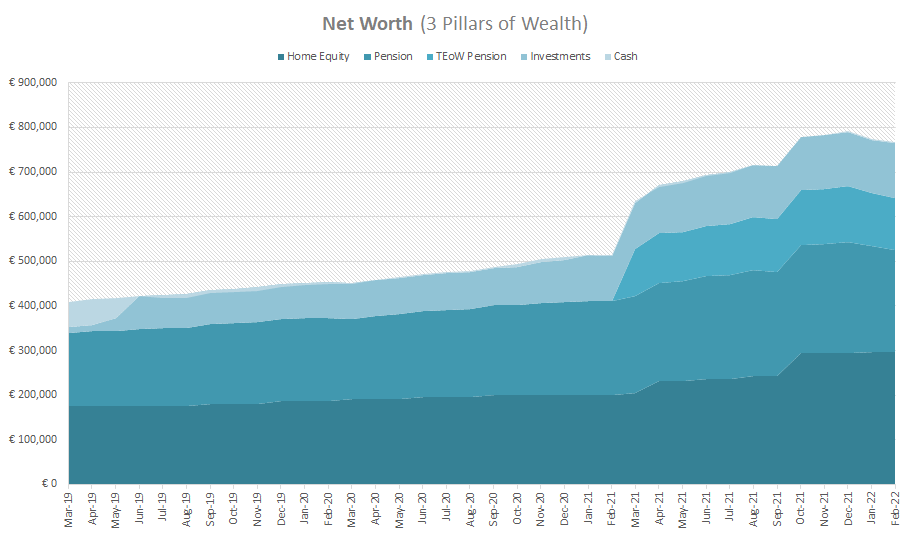 I hate Putin, and I made good money from investments this month.

Thanks for reading! Hope to see you (again) next month.