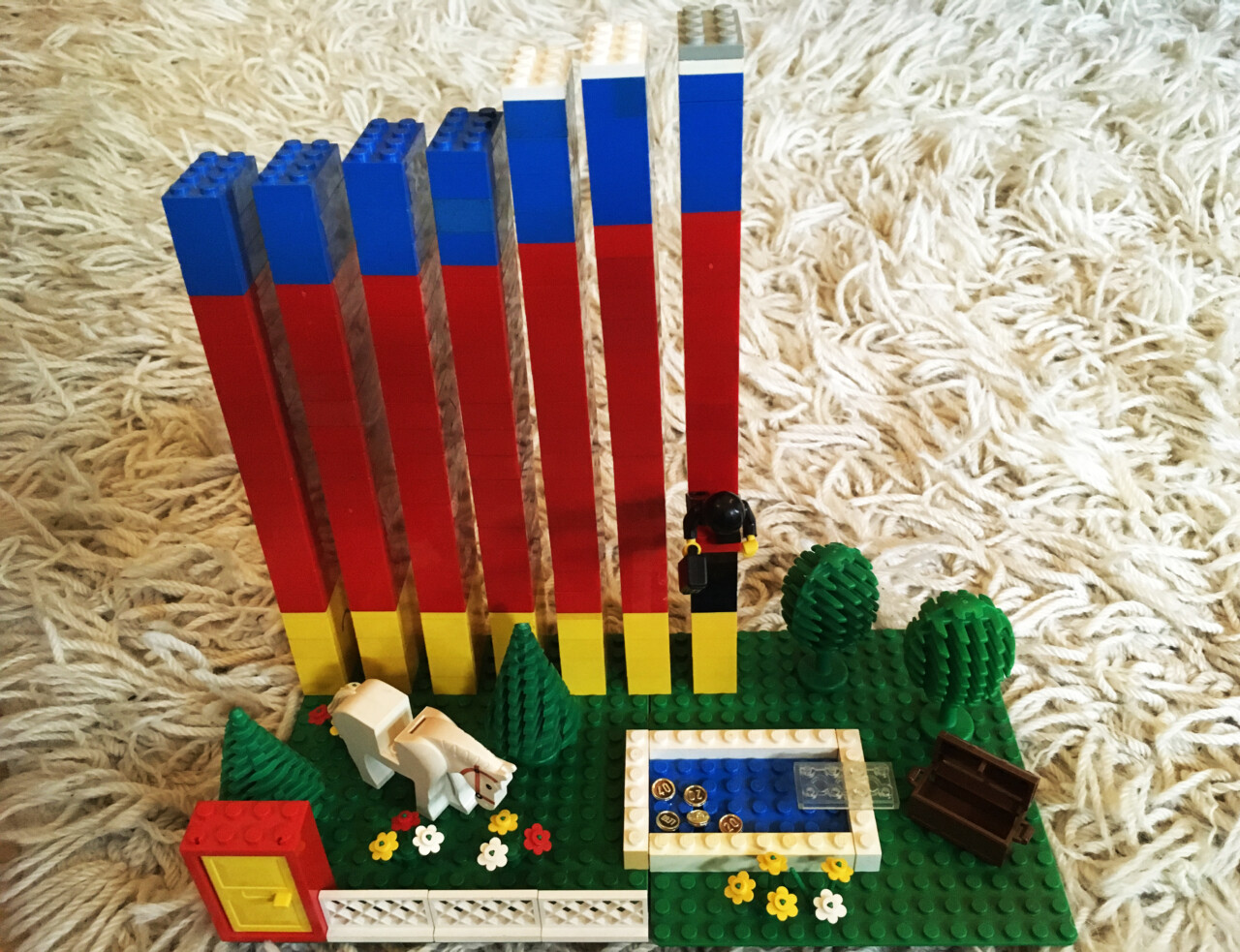 Another month in the Total Balance household has flown by!

As per the standard; it’s thus time for another riveting update, on my quest towards Financial Independence.

I’m joined today by my trustworthy friend, Russel the Total Balance mascot, who in the spirit of this months headline is Taking the plunge (into a pool! – Of Money!). I apologize for the poor picture quality, but I was in a hurry – and 2 seconds after this picture was taken, Catzilla dropped by and destroyed the whole scene – so a re-take was rendered mute! HAHA!

Anyway, Catzilla and Russels shenanigans a side, this month was a pretty eventful month – so let’s get to it, shall we?!

Two new colors made it into the Russel-gram this month!

Avid readers would know that I (finally) spent a chunk of my cash stash, on the down payment for Property #1 this month (this is represented by the black part of the latest pillar in the Russel-gram). – But WHAT is that?! A little GREY brick also made it to the top of the pillar this month (the tiny bricks represent a value of €1000).

I had vowed (to myself) that I would refrain from investing any further, until I had paid the full amount for Property #1 (it’s €68.666, of which I have now paid €13.333 as a down payment). – And yet, about 1 week ago, I found myself buying a little piece of an apartment building in Copenhaven (North West), offered via brickshare.dk. I previously wrote about this opportunity, and at that time I was undecided, whether I wanted to invest in this particular property.

I followed the progress on the rental units, and by the time they had all been rented out (23 units), I decided to get a little piece. I’m still very annoyed by the fact that Brickshare now seem to have deliberately held back the latest price statistics for Copenhagen (Q1 2019 stats are available – but they have chosen not to publish them – I assume…). I come to this conclusion, as I was ensured by their CMO that they would be publicized, as soon as they were available (he emailed me). I wrote him again this month, asking when they would be published, but never got a reply. Shame on you, Brickshare 😉 I know you are reading this! Get your shit together! This is clearly a deliberate attempt to paint a brighter picture of the future for the real estate market in Copenhagen, and I find it rather uncool to be honest.

I trust their platform and the work they are doing, which is why I ultimately chose to invest – but this “experience” has made me question the information (or the lack thereof) that the crowdfunding/crowdlending platforms offer on their projects. I “gladly” invest in the baltics based on a lot less information – but since Denmark is my home turf, I expect more (apparently). It should be the opposite way around, really… 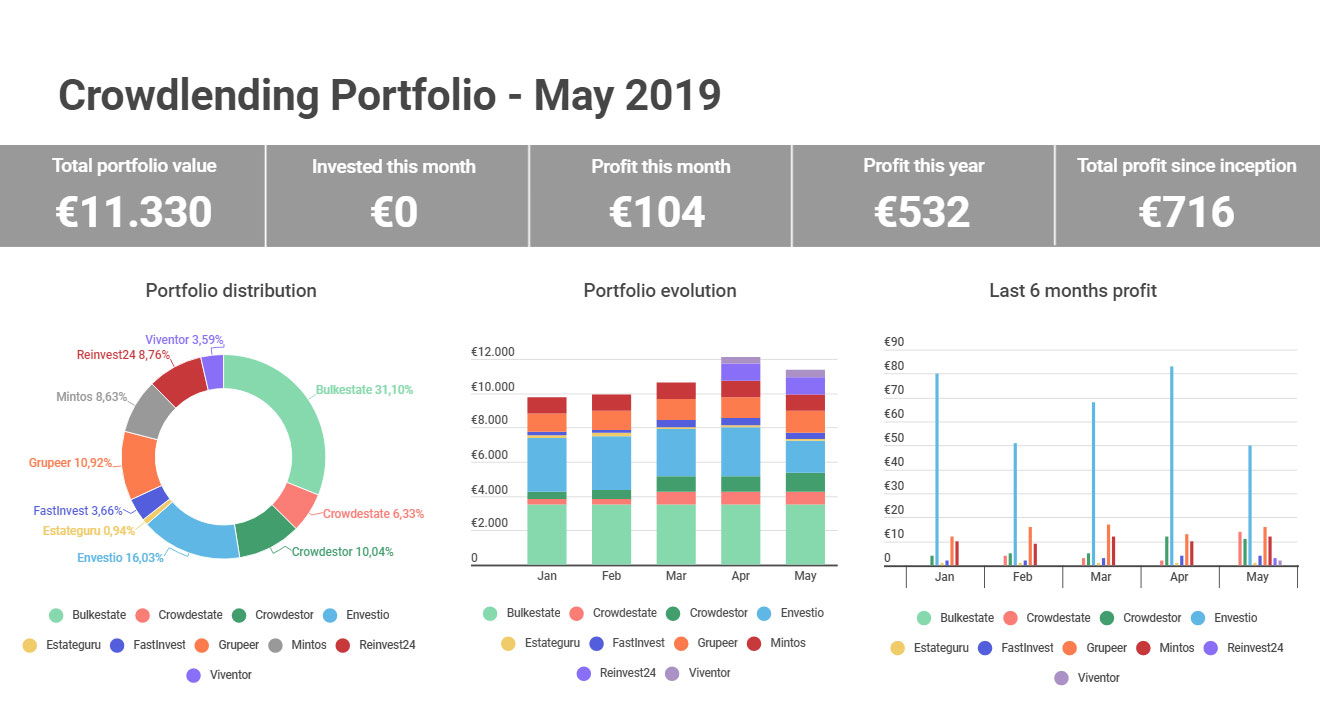 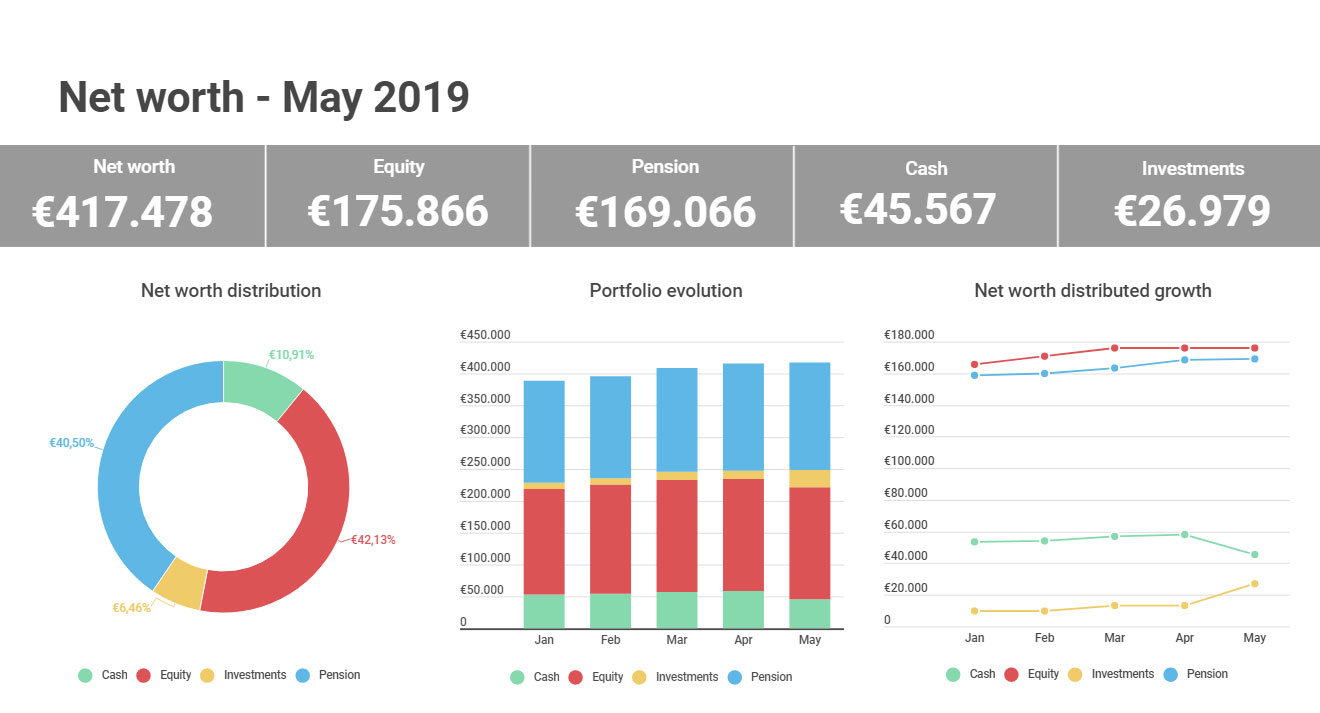 I had a €1.000 loan mature at Envestio, so I pulled them out of the platform (trying to diversify my crowdlending portfolio). Since I “accidentally” spent €1.333 on brickshare, those €1.000 doesn’t quite cover it, so all in all I’m not doing a great job at boosting those savings. I added €1.067 to my savings though, and of the €1.100 that I pulled from Envestio this month, €200 of those went to Crowdestor. I’ve been really impressed with the amount of (diverse) projects that they’ve been churning out lately. I’ve reached my limit of around €1.000 +/- on Crowdestor now though, so the plan is not to add any further funds to that platform (unless some crazy new project comes along, with a 20%+ interest that I just HAVE to participate in…).

Passive income this month was pretty average, with a total profit of €119. Nothing to brag about, yet nothing to scuff about either! 😉 I’m fairly content with the progress so far. ALL platforms paid out a little something (except for Bulkestate, which doesn’t pay out monthly interests).

I might add a new platform soon (stay tuned!), to replace EstateGuru, which I’m planning to exit, due to the interest rates being a bit too low for my taste. It’s a solid platform, but with no buyback and no secondary market AND low(er) interest rates (I’m aiming at 13-14%), I think I can do better elsewhere.

I’m still a bit uncertain about the classic P2P concepts (Mintos, FastInvest, Viventor). They pay well, they have buyback (most originators) and a secondary market, but it just doesn’t quite speak to me, like the P2B pick-and-chose platform projects on Crowdestor, Envestio etc. I really like to know what I’m investing in…I will leave my allocations as-is for now because it provides good diversification, but I don’t think I’ll be adding new P2P platforms anytime soon.

My REIT #1 soared 4% this month, but since I’m not a fan of adding unrealized gains to the books, I’ve decided not to write-up the value, based on the latest development – so for now they have the same book-value as when I bought them – only added the monthly dividends 😉 (yes, I’m weird, I know).

No major changes to my equity or my pension, so my net worth didn’t change a whole lot this month.

June and July are going to be two big holiday months, so I doubt I will be able to add much to my savings for the next couple of months. We shall see.

As always, I include my “classic growth chart” for future tracking purposes 🙂

Blog visitors broke my all-time high record by 18% this month, and you guys particularly liked my post on Property #1, which even managed to beat my April Update in views! I’m glad you guys are taking an interest in the project, and thank you for stopping by! I also noticed that the posts which contain less numbers and more “touchy-feely” stuff are getting a lot less views – so that is duly noted 😉 I shall try to produce some more “meaty” posts going forward! 😛

I unfortunately don’t have time to do a shout-out section this month, but I urge you to keep supporting the community, and I often visit firehub.eu when I’m looking for some new input – if you haven’t bookmarked it yet, do it now! 😉

Thanks for reading! Hope to see you again next month 😉

Oh, I forgot to mention: My bank changed my interest rate from 5% to 3% (only the first €13.333 gets this rate), which is a little annoying – especially since I just moved my bank account to take advantage of that 5% interest. It doesn’t really matter a whole lot anyway, because in 2 months the account will be empty anyway (Property #1 require me to empty my pockets!), so I decided to switch bank – again! 😛 But more on that later 😉