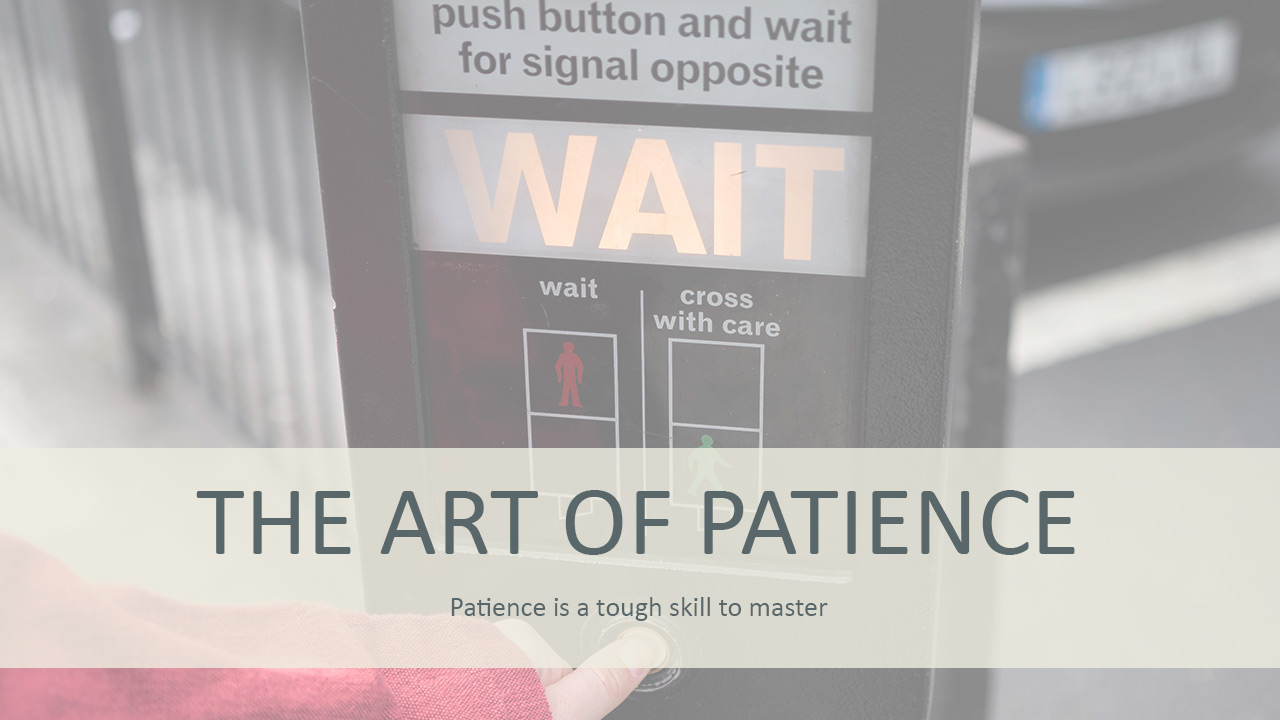 I feel like I’ve reached a point in my “blogging career” where it has become socially acceptable to quote myself (no?…).

In my December 2018 update titled “The battle of the patience” I wrote the following:

Patience is not my strong suit! My impatience often lead to doubt! And when you combine doubt+impatience, you get a dangerous cocktail. I keep having to remind myself of the great words from Gandalf the Grey: Do not stray from the path!

I re-iterated my personal relationship with “patience” in another post in mid 2020 entitled “Are we there yet?“.

I also wrote a post back in 2019, about why “Time and consistency” are the two main components you need, in order to become a decent investor. So you would think that I’ve pretty much covered the topic of “patience” by now?

Well, none the less, here we are again!?

In these Covid-19 lockdown times, I find that my patience are being tested on a daily basis. Boredom and wanting to do all the things you used to do (before the pandemic) leads to impatience and annoyance – and maybe sometimes you find yourself looking for some/any form of “action” to get you out of that state of forced complacency.

I’m here to tell you that it’s ok 😉 This happens to all of us!

It’s difficult to “look away” (from the markets), when you just want to get on with it! Or to not “treat” yourself, when you’re feeling like you deserve it (it’s human nature).

Since our “remodeling” project that I described in my last update is pretty much finished, I’ve found myself in a bit of a vacuum. But I’ve noticed something that happens every time I start spending money on something – I always get “carried away”. I set out with the idea of spending as little money as possible, and when it becomes evident that it’s not possible to remodel an entire room without spending a bit of money (I wanted to use re-loved furniture only! – That didn’t happen…) I just let go. I give up trying to hold back. It’s something that I’ve noticed before – like I remember when we moved into our new house, we bought all kinds of shit. Granted, we have used most of the stuff, but I recognize the feelings that run that shit-show: Instant gratification.

For some reason, when I started thinking about this, a bit from one of my favorite comedians popped up in my mind! It was the “Party Goblin“, by Iliza Shlesinger.

If you haven’t seen it or don’t know her – YouTube it! She’s hilarious.

In “The Party Goblin” she explains how she has this Party Goblin resting in her mind like a troll. It sleeps and awaits the magic words:

OK, maybe I’ll just come out for 1 drink tonight – because I have to get up early in the morning!

And then you’ve resurrected the Goblin from her “beauty sleep”! YOU thus wake up the next morning, and remembers nothing about what happened last night (basically) 😛 The Goblin however had a blast!…

I HAVE AN INSTANT GRATIFICATION GOBLIN HIDING IN MY HEAD!

Yes, I do! And it comes out when I utter (or even think the words):

The beast awakens. Weeks later I’ve maxed out my MasterCard. Thanks a lot, Instant Gratification Goblin! 😛

It’s almost like the longer you starve your Goblin, the nastier it gets when it awakens! (Cause we all know it’s going to awaken at some point!).

So I think the trick here (at least for me) might be to feed it just enough on a regular basis that it never gets to that point where it just goes completely berserk. Of course, there’s also the possibility that you actually starve it until it dies! (Does that ever happen?! – Did anyone succeed in killing their Goblin!? If so, please let me know in the comments below!)

Anyway, what’s done is done. I’ve never regretted spending money on something that I felt provided me value. But I would like to control my Goblin(s) a little better! 😛 (Wouldn’t we all?!)

I have a similar pattern when it comes to investments. Sometimes I wonder how I managed to hang on to the majority of my original cash stash (€50.000+) for 6 months, before finally putting them to work in Property #1.

Since then I haven’t really been able to accumulate much more than €5.000-€6.000, before “spending” them on some new shiny investment. I realize that it’s much better than spending it on new shiny objects (gadgets etc.), so I’m not beating myself up about it!

However, since I purchased Property #1 I’ve been babbling about getting Property #2 on the roster as fast as possible. But as the avid reader would have noticed, Property #1 became mine when my Total Balance crossed €80.000. As of the latest update, my Total Balance is now €107.537, which means that I should basically be halfway towards Property #2 by now…But as you know, I’ve currently only got about €5.000+ worth of cash in the bank (the rest has been invested in various different assets). Well…it WAS cash…Now it’s something else…

My Investment Goblin has once again awakened! And this time it brings with it a friend: The Leverage Goblin!

(Follow what my Goblins have been up to in the next monthly update!)

How are you handling your Goblins?! Hit me up in the comments below.

One thought on “Patience is a virtue”